Our house is once again quiet - the rooks in a nearby pine tree and a few pigeons cooing on the roof are all that's breaking the silence. They've obviously bred well this year as their sudden loud flapping as they take off from the conservatory roof or indulge in a bout of 'flap thy neighbour', in the cherry tree, is turning me into a nervous wreck. Perfect for a RIP IV short story weekend in fact...

So I made a start this afternoon and read a nice clutch of creepy short stories: The Adventure of the Sussex Vampire and The Adventure of the Creeping Man, two Sherlock Holmes stories by Conan Doyle, of course, and The Wakeford Abyss a story from Nocturnes by John Connolly.

The Case-Book of Sherlock Holmes is one of the later Holmes anthologies, if not the last. I've heard tell that his later stories are not as good, which surprises me as, judging by the two I picked out to read this afternoon, this is not at all the case.

The Adventure of the Sussex Vampire starts with Holmes receiving a letter from one Robert Ferguson, who is concerned about his second wife. Of Peruvian nationality she was caught assaulting Ferguson's disabled teenage son and biting her own one year old son. Ferguson is at his wit's end and, naturally, Holmes and Watson travel to their client's home to investigate this macabre case.

The Adventure of the Creeping Man has Holmes and Watson receiving a visit from Mr. Trevor Bennett, professional assistant to a Professor Presbury and engaged to the professor's daughter. Both Mr. Bennett and his fiancée have concerns for her father who, at sixty one has fallen for a much younger woman and been rejected. This occurance seems to have altered his personality in various frightening ways, night-time wanderings and so forth, so much so that his daughter is unwilling to return to her home until the matter is put to rest. Holmes and Watson investigate in their own inimitable fashion.

A great start to my RIP IV challenge... what better than two seriously dark and mysterious Sherlock Holmes stories? Not much else to say about these apart from the humour in them always takes me by surprise: (Watson on his function in Holmes's life)

But apart from this I had uses. I was a whetstone for his mind. I stimulated him. He liked to think aloud in my presence. His remarks could hardly be said to be made to me - many of them would have been as appropriately addressed to his bedstead - but none the less, having formed the habit, it had become in some way helpful that I should register and interject.

I've been reading John Connolly's Nocturnes for what seems like ages. To tell the truth it *is* ages... maybe eighteen months, I certainly know that I read some stories from it for last year's RIP challenge. Anyway, I only have a few left now so hopefully I can finish it at last. 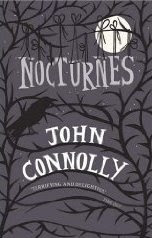 In The Wakeford Abyss we meet two men, Molton and Clements, about to make a descent into a cavern. Previously mountaineers, they have both decided to try their skills on going 'down' instead of 'up'. Only the cave they have chosen is no ordinary cave. The locals have all kinds of stories to tell and a farmer recounts how his goats, who used to eat the grass right up to the entrance, will now no longer go anywhere near the place. Our heroes, of course, ignore all these warnings (TSTL?) that would make any normal person suddenly remember a previous engagement in another country, and press on with their plans. What happens down there in the depths of the abyss? Well you'll have to read the story to find out. :-)

Sunday now, and for some reason cave stories always make me want to read Cthulhu Mythos tales so I grabbed my copy of Shadows over Innsmouth, edited by Stephen Jones, and settled to down to read.

The Church in High Street, by Ramsey Campbell, recounts how a man down on his luck travels to Temphill in order to take up employment with a friend who needs a personal assistant come sectretary. The town, situated in the Cotswolds of all places, has the reputation of being a strange place with odd inhabitants, which is exactly what the man finds when he gets there. His friend has disappeared and the man follows his friend's trail to the local church...

The Innsmouth Heritage, by Brian Stableford, follows the exploits of David Stevenson as he arrives in Innsmouth. in New England, to catch up with his old friend, Ann Eliot. The notorious families with fish-like facial characteristics are dying out in the town. Stevenson wants to try and discover something about their genes and in what way they differ from the rest of the human race. But it's the 'dreams' which are really bothering the last of the 'lookers' and David's friend, Ann, although not a 'looker' herself is, in fact, one of the dreamers...

The first of these stories, The Church in High Street, didn't really work for me. Perhaps it was the Cotswolds setting (it just is not a weird area) or maybe it was Campbell's writing, I'm not sure. I found his tendency to fill the story with as many clichéd horror details as he could, tedious, and the whole thing felt rushed and unloved. The second story, The Innsmouth Heritage, worked much better I thought. It had more atmosphere and was detailed exactly where I wanted it to be with a nice - though predictable - twist at the end.

There are a few nice illustrations in this book, done by Dave Carson, Martin McKenna and Jim Pitts, and which I couldn't resist photographing. 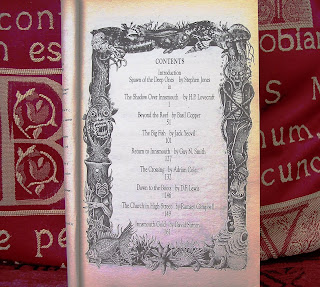 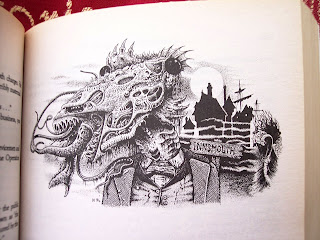 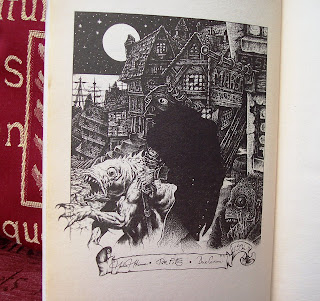 The truth of nature lies in deep mines and caves.
- Democritus -

well you certainly had a creepy day lol..
how could anyone not like sherlock holmes? it always amazes me that doyle came to dislike writing Holmes stories.

Those are fantastic illustrations. I only started reading Doyle this year and love the Holmes stories I have read so far. I will have a major Holmes readathon in October for the Baker Street challenge...I saved four of his books for the spooky month but your review has got me in the mood to read them now.

Pat, I dunno about a creepy day, it was certainly rather 'lazy'. LOL.

I never tire of Sherlock Holmes, even if the story is a bit average that way they're written is always wonderful. I really want to see the new Holmes movie when it comes out, even though I'm not keen on its star - whose name I now can't remember...

Giggling at the thought of the fishface people eating fish. You reminded me that when we were kids if you wanted to be rude to someone you called them 'fishface'. The things you forget...

Book Psmith, like I just said to Pat I never tire of Sherlock Holmes. Love the books and the TV series and even some of the offshoots such as Laurie King's Mary Russell and Sherlock Holmes books.

I bought my boyfriend the boxset of Sherlock Holmes (the Penguin ones), which he is currently reading through so I may pick up these short stories for R.I.P. short story Sundays; you make them sound wonderfully dark and creepy.

I got through a lot of short stories on Sunday, but didn't manage to pick up any Lovecraft. Ah well, there is still plenty of time.

I'm glad you had a 'lazy' day...my Sunday was the same way, I spent the afternoon just pouring over story after story. It was a real pleasure and one I haven't had, at least with that much time, since the last 24 Hour Read-a-thon.

thanks for the great reviews and for adding some stories to my list!

Paperback Reader: Not all the Holmes stories are creepy but a surprising amount are. And if you want something longer, The Hound of the Baskervilles is perfect for the RIP challenge.

Carl: I suppose it's the Victorian setting which makes the Holmes stories lean towards the creepy. Some more than others, I was just lucky in my choices this time.

I plan to reread some Lovecraft too but have three books of his work that I read years ago. I'm slightly intimidated by the sheer number and am not sure where to start rereading.

It's so great to have fun like this for the RIP challenge and to share the fun with other people.

I love those illustrations! And you know, for some odd reason or other I hadn't considered reading from my Complete Sherlock Holmes for RIP, but that's a fine idea :D

Nymeth: Sherlock Holmes is just so perfect for RIP. I plan to read a lot more - not really a hardship. :-)

Here is a link to the challenge page...

It started January and last until the end of the year. There are different tiers to choose from...anywhere from three books to seven. You can choose from 'the canon' or non-fic books about SH or Doyle as well as off-shoot works.

Hi Cath
Summer visitors almost all gone so I will soon have time to catch up with all the posts I've missed. In the meantime there is a little award waiting for you here http://randomdistractions.blogspot.com/2009/09/accepting-graciously.html

Book Psmith: thanks so much for the link, I'll be looking into that in a moment.

Monix: I hope you soon get some time to yourself. And thank you again for the blog award.

Fabulous illustrations, Cath! I love them. Must find a copy of this book somehow.....

Robert Downey Jr is the actor, and I'm counting down the days until the new Sherlock Holmes movie opens, it looks very interesting! and slightly decadent, and dangerous ,perfect for RIP too :-D

I never thought of reading Sherlock HOlmes short stories for RIP!!! I was just thinking of pulling out some of my Year's best Fantasy books to see what Horror I could find in them....

You are having so much fun with this challenge, Cath!

Susan, I thought the new Sherlock Holmes movie was out at the end of August. I was really disappointed when I discovered that in fact it won't be out until the end of December. That's far too long to have to wait!

You're so right, I'm having *waaaay* too much fun with the RIP challenge this year. :-)