It's ten days since I posted here! It wasn't intentional, I've been a little busy - I have been reading though, just not as quickly as I would like. Anyway, The Murder Stone by Louise Penny has to go back to the library today so I'll write a bit about it while I still have it: always easier! 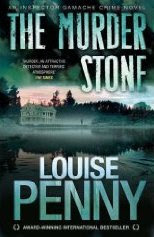 Armande Gamache, a chief inspector with the Sureté du Québec, has taken some time off for his wedding anniversary and taken his wife, Reine-Marie, to the Bellechasse, a hotel in the forest not too far from the village of Three Pines. It's not their first visit there, they spent their wedding night at the hotel and have been there every year since. It's an expensive, exclusive place, wonderfully quiet and peaceful and they love it there and know the owners and staff well.

Also staying there are the Finney family, elderly mother and step-father, three middle-aged siblings and one grandchild. Gamache cannot help but study the family. He finds them a strange lot indeed and comes to the conclusion that there are problems in the family. Then a fourth sibling arrives and Armande and Reine-Marie are stunned to find that they know the couple very well indeed.

Armande continues to study this troubled family, only with a lot more interest now, until, one awful night, a death occurs. One of the siblings is killed when the statue of their father, newly errected in the garden of the hotel, falls on her and crushes her to death. It should have been an accident but the weight of the statue suggests it is not. The Sureté are called in and Gamache's team set about investigating. The problem is, the family are so troubled that literally anyone could be responsible for the murder...

The Murder Stone is book four in Louise Penny's excellent crime series set in Quebec. I've enjoyed them all and this one was no exception. Instead of a murder story set, as in the first three books, in the village of Three Pines, this one benefits nicely from a change of setting - although the village does appear briefly. This means the story is more of an Agatha Christie type murder mystery and I quite liked that. I also loved the hotel and wondered if such a place really exists. I would love to stay there, though am not sure we would be able to afford it! Actually I'm sure we would not...

Anyway, enough day dreaming, any negative points about the book? A couple of minor ones. I found the constant harping on about how ugly Mr. Finney was, grating, and wasn't quite sure what the point of that was. Surely not to infer that those who are less than beautiful are more likely to commit murder? And I think it was Susan at You Can Never Have too Many Books who mentioned some while ago that the sudden appearance of four-letter word swearing was grating on *her*. I agree. I know some men swear like that and maybe policemen especially (though I doubt it), so, likely as not, it's a bit of realism instilled into the books. But it grates on me too and takes me out of the story, and I really don't care for it. Just my opinion of course, Your Mileage May Vary, as they say.

All that said, I thoroughly enjoyed this instalment of these Canadian mysteries (there's a new one out soon, or maybe even out already). I reckon Canada is a wonderful country to set mysteries in and Kay has introduced me to another series, by Vicki Delany this time, and set the other side of Canada, in British Columbia. Can't wait to start the first one, In the Shadow of the Glacier, which is already on my tbr mountain. Are there more mystery series set in Canada? If you know of any please let me know.
Posted by Cath at 09:27

so funny that if you find a good crime writer and the crimes are in another country other than England they interest you more it seems.. while I most like the victorian mysteries that happen in England! lol.. we are never satisfied are we?! lol

I think it's down to the fact that I've wanted to go to Canada since I was a kid, Pat. And I bet your love of Victorian mysteries stems from the fact that you always wanted to come here too? And maybe the Victorian style movies you saw, like A Christmas Carol, influenced your view of England a little bit? I think also I love learning about other countries so a crime series set in foreign climes is a Good Thing for me. I don't think it's that we're not satisfied - more that people like us are ever curious about what's out there. And even if we can't go there we can at least read about it.

Can't think of any mysteries off hand Cath, but if I remember right John Buchan's novel Sick Heart River was set in Canada and I loved that one also I'm sure Doreen Tovey wrote amusingly about holidaying in Canada...just checked ..I'm exaggerating it has just the last chapter on the Canadian holiday..."Making the Horse Laugh" I think most of the book is about learning to ride so she won't disgrace herself when riding at a ranch on holiday

Cath, so glad you liked The Murder Stone or A Rule Against Murder as it is titled here in the US. Yes, it is based on an actual hotel. The name has slipped my mind, but I suspect it is on Louise's website. I liked the fact that they went out of Three Pines and I love a "locked room" mystery.

The mystery website Stop, You're Killing Me has a section about Canadian mysteries. The link is: http://stopyourekillingme.com/LocationCats/Canada/index.html

Maybe you can find something else fun there. It is my mission in life to introduce as many people as I can to good mystery books! :-)

There are lots of great Canadian writers writing today. The best source is Crime Writers of Canada. Look for the link to Cool Canadian Crime, a listing of forthcoming books. Unfortunately the CWC web page is sadly out of date and Cool Canadian Crime is also. My blog, Type M for Murder often has Canadian authors as guest bloggers. Happy Reading. Vicki

Couple of names of authors who set their books in Canada that come to mind quickly: Barbara Fradkin, Rick Blechta, R.J. Harlick, Mary Jane Maffini, Michael Blair. They write a wide variety of books and all have web pages. Also, check out the publisher Rendezvous Crime (Napoleon and Company's Crime Imprint). All of Rendezvous's books are set in Canada.

Cath, this is one book I am looking forward to, and have been concerned a bit about the lack of the Three Pines setting. Sounds like that is not a problem! I hope there are many more in this series.

Val: I'll look up that one by John Buchan. I've read a couple by him but not that one. Thanks for the rec.

Kay: I loved the diversion of the plot being set somewhere else too. It made quite a nice change and was equally as enjoyable.

Thanks for the URL, am going to check out a few places later.

I can't believe how much of a mystery fan I've become and that's really since I joined Blogger and and started reading blogs like yours. Before that I just read the odd historical crime book.

Vicki: Thanks for visiting my blog and for leaving lots of interesting suggestions. I'm going to check them all out later. In the meantime I remembered a site that a friend of mine co-edits and searched 'Canada'. Here are the results if you're interested:

I'm not sure if that search link will work, if not the main site is here and you just use the search function:

The same friend had these suggestions when I asked about Canadian crime authors:

'Lou Allin, Giles Blunt, Anthony Bidulka, Steve Hamilton (I think his hero technically lives in the US, but it's border country, and the couple I've read have been good), Barbara Fradkin, Mary Jane Maffini and Inger Ash Wolfe. Some of them might be hard to track down in the UK, though!'

I see some of those authors match yours.

Thanks so much for your help.

Tara: You need have no concerns about the different setting in this fourth book; it's still an excellent read! The new book is called A Brutal Telling and there's a bit about it here:

I think it sounds excellent.

I have this sitting on my TBR mountain.....I must get to it, so that I can read the next one once it's out in paperback. I'm so glad you're enjoying this series!

and you know that if you do make it over here, you and Peter can stay with us :-D at least for the Ontario part! Canada is kind of large! lol I didn't know you wanted to visit here. My husband visited Canada three times and decided he wanted to live here, long before he met me.

You HAVE to read Giles Blunt then, if you haven't read him yet. Forty Words for Sorrow is his first one, and it's one of my favourite mysteries.

And how cool that Vicki Delaney herself came to your site! I saw her on Kay's site also and have added her books to my library wishlist, which failing that, I'll buy one to try. They look quite good.

Susan: I don't know why but I thought you'd already read this one. I must be having a senior moment. Actually my whole life is one 'senior moment' these days...

I've wanted to go to Canada since I was around 15 or 16. What set it off I'm not sure but I wanted to emigrate when I was 19 and instead I met my husband and it never happened. We crossed the border in 1996 when we went to Niagara Falls but have never seen Canada properly. And thank you for your kind offer, you never know... one day.

I've made a note of the Giles Blunt book... I *really* need to start a new series. Heheheheh.

And yes, it was so nice to have input from Vicki Delany, I'll be starting her series pretty soon too.