I'm behind with book reviews again so this is a three book catch-up post, three quick reviews of books I've been reading over the past few weeks.

First up, Footsteps in the Dark by Georgette Heyer which is my book three for Carl's R.I.P. V challenge. 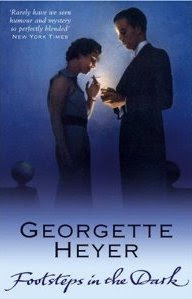 Siblings Celia, Peter and Margaret have inherited The Priory from an uncle. Along with Celia's husband, Charles, and an elderly aunt, they go down to stay for a few weeks. The Priory itself is a rambling old house with the ruins of the old priory in the grounds. The place has an atmosphere and the locals in the village are known to stay away because it's reputed to be haunted: 'The Monk' has been seen in the grounds and in the house. Peter and Charles pooh-pooh the idea that the house is haunted but the women are nervous. Things begin to go bump in the night and weird groans are heard, culminating in a skull falling down the stairs and the discovery of bones in a priest's hole. What's going on? Is someone trying to frighten them away? If so who? There are culprits galore, a drug addicted artist, a moth collector and two dubious looking men staying at the inn. All have been caught wandering in the grounds of The Priory. Can the mystery be solved before someone is seriously hurt or even murdered?

This was great fun. I've read many of Heyer's Georgian and Regency romances and love them to bits but had no idea whether I would like her mysteries. Footsteps in the Dark was written in 1930s so is, of course, of its time. The main characters all speak with clipped, upper class, English accents, such as you might have heard in films of the period. Heyer's trade-mark humour is very apparent in the dialogue and in characters such as the planchette addicted, hard of hearing, old aunt. Someone on Amazon likened the plot to an episode of Scooby Doo... I laughed but yes, they are spot on actually. Personally, I saw Enid Blyton for adults, with secret passages, hidden entrances to the house and all kinds of skulduggery and high jinks going on, plus a bit of romance. Loved it and will definitely read more of Georgette Heyer's mysteries.

Next, Summer by Edith Wharton.

Charity Royall is the adopted daughter of Lawyer Royall. She was originally from the nearby 'mountain', a rather mysterious area where the small population live in abject poverty. Bored and frustrated in the small rural town in Massachusetts, Charity manages to secure a job as the sole librarian in the town library. In walks Lucius Harney, one day, an architect studying local old houses. Charity gradually gets to know him and, seeing her escape route from small town to big city, embarks on an affair, scandalising her father and the entire village.

This is only my second book by Edith Wharton (the first being The House of Mirth) although I have read a few of her supernatural short stories. The writing is always fantastic, readable and beautifully descriptive. The sense of being in the mountains of Massachusetts was atmospheric and overwhelming. But so was Charity's closeted, stultified life - and her desire to get out quite understandable. Edith Wharton clearly understood that vast armies of women were bored stupid by their lives and that this could drive them to reckless actions that, sadly, were often their undoing. This is not a cheerful book but one that teenage girls should read, imo, if only to understand how fortunate 21st. century women are in that they have opportunities girls like Charity could only dream of. Superb read.

Summer is my first book for the Classics challenge. Realistically, I don't think I'll be finishing this one, as it ends on the 31st of this month and I can't see me fitting in three more classics before then.

And lastly, Icons of England edited by Bill Bryson. 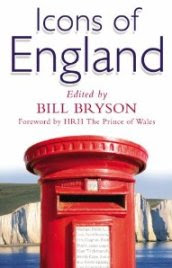 I'm pinching the Amazon synopsis for this as it's quite a few weeks since I finished it:

This celebration of the English countryside does not only focus on the rolling green landscapes and magnificent monuments that set England apart from the rest of the world. Many of the contributors bring their own special touch, presenting a refreshingly eclectic variety of personal icons, from pub signs to seaside piers, from cattle grids to canal boats, and from village cricket to nimbies. First published as a lavish colour coffeetable book, this new expanded paperback edition has double the original number of contributions from many celebrities including Bill Bryson, Michael Palin, Eric Clapton, Bryan Ferry, Sebastian Faulks, Kate Adie, Kevin Spacey, Gavin Pretor-Pinney, Richard Mabey , Simon Jenkins, John Sergeant, Benjamin Zephaniah, Joan Bakewell, Antony Beevor, Libby Purves, Jonathan Dimbleby, and many more: and a new preface by HRH Prince Charles.

Delightful, this one. Much of it was various celeb's memories of their childhood haunts, which to me was nice as I have similar childhood haunt memories of my own from 1960s Cornwall. And it seems we remember the same things - running wild in the woods, fields and streams, not getting home until teatime and then out again first thing in the morning. I suppose there must've been rainy days but I don't remember any. Since then, this kind of childhood has all but disappeared and how tragic is that? Of course there are other, more unusual choices. Tony Robinson chooses Mick Aston, the Time Team archaeologist, for instance (I agree!) and one person chose a Victorian sewage works in London. The funniest to my mind was Bill Bryson himself, questioning the point of seaside piers. Very enjoyable, recommended as a bedtime read or for American Anglophiles who will love it.
Posted by Cath at 13:33

well, you have been a busy reader!!
Hard to believe October is already here! WE turn our clocks sometime this month.. I dread it !


I just now finished my 4th read for RIP Stones Fall. Will try to write it up for tomorrows post.

As a devoted anglophile I think I will have to read "Icons of England"! Thanks for reviewing it!

Yep, I have *no* idea where this year has gone. Flown past.

Look forward to hearing about Stones Fall. Out this morning but will catch up with you this afternoon.

Willa: It's a lovely lovely book. So many interesting memories, and some of places I knew, which made it very nostalgic for me.

I thought Footsteps in the Dark was great fun - I hadn't thought of it as Enid Blyton, but you're right, that's it exactly. Not all the mysteries are funny, though. Penhallow is full of horrible, horrible people, I promise you won't so much as smile!

Georgette Heyer is an author I probably should have read by now, but I keep avoiding her... One day I will!

GeraniumCat: I'll bear that in mind! I gather Heyer went on to write two seperate series of mysteries about two detectives. I was hoping there might be more about Inspector Draycott but apparently not. Shame.

Kailana: I'm a firm believer in there being the right time to read an author and your time for Georgette Heyer will come.

I must read Bryson, I like the sound of this book. Like you say, when you look back on childhood you never remember the rain!

Ooh, the perfect Christmas present for my husband - Icons of England! thanks for the review, Cath! I have to go order it now :-D

Susan: Gosh yes... I didn't think of you and your hubby for Icons of England but you're so right. I think he will love it!