My current read is going quite slowly, partly because I also started something else and abandoned it after 100 pages, but also because it's a book to savour. It's In Tearing Haste: Letters Between Deborah Devonshire and Patrick Leigh Fermor, edited by Charlotte Mosley. It's one of those books that you can sit down, read a few letters over a cup a tea and a biscuit, go and sort the laundry, tidy up after your husband, come back, read a few more letters. I love it. PLF travelled a lot and some of his European trips he wrote to Debo about. Wonderful descriptions of the Balkans, the mountains of Greece and Spain and so on. And Debo is so funny. She wrote to Paddy:

'This came, usual thing asking for money. Poor Archbishops, I thought, feeling the pinch. But it turned out to be monkeys'.


I laughed so much, sitting up in bed, that the headboard kept knocking against the wall and I was afraid I would wake my husband up.

Anyway, more about this book when I've finished it.

Last year was a year in which I stinted myself where buying new books was concerned. Every time I saw or read about a book I wanted to read, I checked the library first to see if they had it. I probably saved myself a lot of money. All this is leading up to a confession of course. And that is, *coughcough*, that over December and January I went a bit mad. In my defense some were either gifts or charity shop buys. (Honest!) But altogether nine new books have come into the house over the last 6 to 8 weeks. These are they: 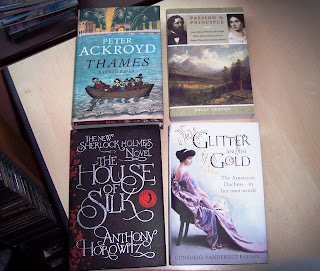 Thames - Peter Ackroyd. I have to say that I've covetted this book for several years. Seen it in book shops, wanted it and resisted. But I bought myself My Mutual Friend by Dickens a while back and it struck me that the two books would be compatible... so I caved in and bought Thames. And I love it of course. Such a beautiful book.

Passion and Principle by Sally Denton. A book about John and Jessie Fremont and American politics. A friend recced it as a good one to read for my US challenge so I sent for it along with Thames. Call them my Christmas presents to myself. It's another very beautiful book.

The House of Silk - Anthony Horowitz. The writer of Foyle's War and the Alex Rider books of course. I didn't know he'd written a new Holmes book until I saw it in Tescos. In the trolly it went.

The Glitter and the Gold - Consuelo Vanderbilt Balsan. American heiress, Consuelo Vanderbilt, married the Duke of Marlborough in 1895 and came to live in England. This is the story of her life... real-life Downton Abbey sort of thing I gather. Christmas gift from my eldest daughter. 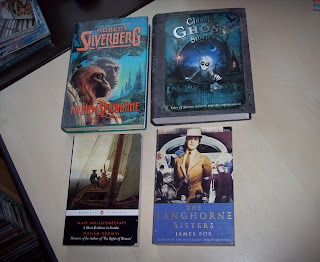 The New Springtime by Robert Silverberg. The sequel to At Winter's End which I reviewed recently. Amazon Marketplace came up with a nice hardback copy of this.

A Short Residence in Sweden - Mary Wollstonecraft and Memoirs of the Author of 'The Rights of Woman' by William Godwin. Random charity shop grab, thought it looked interesting.

The Langhorne Sisters - James Fox. Possibly the American equivalent of the Mitfords, I'm told. Another charity shop purchase for my American books challenge.

And last but not least: 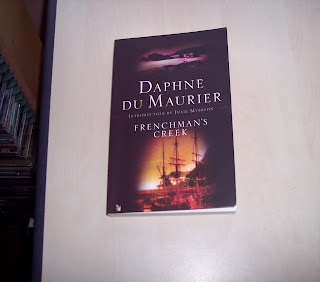 I was talking with my lovely brother about Cornish books and saying that my copy of Frenchman's Creek is a bit tatty and I ought to get another. Next thing I know this arrived in the post from him. Thrilled to bits! I shall be rereading this soon as I read it several times as a teenager and not once since. So it'll be interesting to see what I think of it now I'm in my er... fifties (just over a year and I won't even be able to say that!)

Anyway. Pleased as Punch with my lovely haul of books and plan to ease off a bit now until I've read some of them. Happy reading!
~~~oOo~~~
Posted by Cath at 12:29

(umm sorry about the "delete)

everything looks like they are already waiting for you to start reading them!! I never heard you mention any siblings before! So you have a brother...and one who thinks books are worth sending to special sisters!!! remind him he has an adopted sis in america.. I'll send a book list shortly LOL.. just kidding, but all the books look great..
(oh and love the fact you were laughing that hard from a book!!! it's a great feeling.. or overtired one or the other LOL)

So many lovely books! (I really want to go book shopping today...)

And how nice of your brother. :)

Enjoy your new books! They all look good, so I am looking forward to hearing your thoughts on all of them...

Hi Pat! I thought I'd mentioned my brother in Penzance before, but maybe not. He's on FB now, I'll tell you his FB name when we Skype.

LOL. Ok, I'll tell him all about you. heheh.

It's weird, sometimes something in a book, the way it's written, just tickles you... and that really set me off.

I'm pretty pleased with my books but need to ease off now. Even though I'm still putting read books in the charity shop box - so plenty are going *out* of the house as well as coming in.

Kelly: Thank you, I will.

I haven't come across 'In Tearing Haste' before, but I shall be sure to keep a look out for it on my travels, as it sounds as though 'Debo' is in her usual good form.

I can't believe that the documentary we spoke about in your earlier post, was THAT long ago!! Now I know that I am getting old!

I recently bought a great boxed set, new and unread, of Daphne du Maurier books, quite cheaply from a charity shop. Mother-in-law begged first read of them and I haven't had them back yet.
I used to read her books a lot as a teenager and reading your post has me longing to get my hands on this set, as 'Frenchman's Creek' was amongst them.

Enjoy all of your great finds ...

The Langhorne Sisters is that a Bio of Nancy Astor and Nora Phipps ...Joyce Grenfell's Mother ?
It Sounds like you have some great reads there :0)

I haven't left a comment for a long time but I do call by often to read.

Over on my blog you'll find a book giveaway that I think would suit you. It's a fantasy/sci-fi/mystery. I thought of you as soon as I saw it.

Yvonne: Yes, In Tearing Haste is well worth keeping an eye out for. I've found that if you're patient most books end up in a charity shop somewhere.

Well, there was no mention of that doc in this book either. Debo did mention one about Chatsworth in 1998 but I don't think that was the same one. Very odd.

I hope you get your Du Maurier set back soon. She's such a brilliant author. Try The House on the Strand if you haven't read it. I want to read Rebecca and My Cousin Rachel this year. I can't remember whether I've ever read either (I think I must have read Rebecca) but Pat (Deslily above) has and liked them both.

Val: Yes, I gather Nancy Astor was one of the Langhorne sisters (I hadn't realised). Deborah Devonshire used to go to lunch at their house regularly when she was young... funny how these people are all connected. I've no idea whether Nora Phipps was Joyce Grenfell's mother... wonderful if she was!

Maureen: I'll go and check your post out in a minute. Thanks for letting me know.

Ooh, RObert Silverberg! Ghost stories! books, books, books! lol Libraries are great for reading from, and I try to use it to not buy so many books, but I went on quite a binge over the holidays too. To salve my conscience I went to the library and found five books to read there too :-)

Lovely that your brother did that for you!

YOu are making me really want the Thames book too, you know.

Susan: We both have a huge love of libraries and despite my decision to try not to borrow so many this year, I'm not doing very well at it. LOL. I have 7 or 8 books out and 3 more on reserve. Not the actions of someone trying all that hard to cure herself of a library addiction...

Yes, I have a really lovely brother. :-)

The Thames book is gorgeous. I even paid a bit extra for the hardback as I prefer that cover. It has sumptuous photos to illustrate it too, really beautiful pictures of artwork. I think it will go perfectly with Our Mutual Friend.

I missed this post until Susan pointed out that you'd been buying books, LOL.

I've got to read some more Silverberg, you keep making my mouth water. I think he should be on my Century of Books, I don't have any SF or fantasy there yet. And Daphne du Maurier would be a good addition, too, if I can find one I haven't read (there must be - shall go and look).

Are you paying over $5 / pack of cigs? I buy high quality cigs over at Duty Free Depot and I'm saving over 70% on cigarettes.