It was down to my lovely friend and 'sis', Pat at Here, There and Everywhere that I ended up with a free copy of The Glass Guardian sent to me by its author, Linda Gillard. I knew Pat had read and reviewed The House of Silence by Linda and that she had really liked it. It sounded like a book I would enjoy too, and I made a mental note to get it at some stage, but I never expected to get a chance to read the author's latest book so soon. Wonderful. Thanks to Pat and Linda Gillard, both. 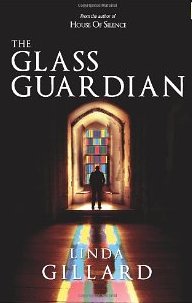 In the past year Ruth Travers has experienced the deaths of three people in her immediate family. First David, her partner of two years, then her father, and then the woman she almost thought of as her mother, Aunt Janet. Ruth is a TV gardener, known to many as 'Delia of the Delphiniums'. But all these deaths occuring as they do, one after the other, have almost destroyed her, particularly that of her aunt. Thus, her career is in ruins and, in an attempt to come to terms with it all and find some peace, Ruth travels to the Isle of Skye, where Janet lived, to sort out the house she's been left in her aunt's will.

The house is called, Tigh-na-Linne and featured heavily in Ruth's childhood. Janet looked after Ruth a lot and many happy holidays were spent with her loving but undemonstrative aunt. The story really begins with Ruth entering her aunt's study one evening to discover something very odd. Janet had been in life a very tidy person, a place for everything etc. Ruth finds her aunt's pen on the desk, the top off, leaking ink everywhere. Her aunt has been dead a month and would anyway never have left her belongings in that state. The other thing is that Janet's RHS gardening diary is open... at today's date. Ruth is spooked. Has someone been in the house and moved stuff around? If so she can't imagine who it could be as Janet was rather solitary in her habits. Plus, Skye is a very low crime area, break-ins are almost unknown. Ruth is perplexed.

She wonders if it might be an odd-job man Janet employed and contacts him. 'Tom' when he turns up is tall and blond and very attractive. And it turns out he was Ruth's childhood friend, Tommy, when she was here in the summer holidays. The problem is Ruth doesn't think the intruder is him. What he does remind her of though, is that she had an imagined friend back then, Heckie. Ruth had completely forgotten, or blocked it out. Things begin to get really peculiar when Ruth is awoken one night by the sound one someone hauling furniture about. She investigates and finds a wardrobe on the landing has been moved. The next day she has the wardrobe shifted and behind it is a stained glass window. The shock is that it's a depiction of a man as an angel, the 'man' is Heckie.

It seems James Hector (Heckie) Munro actually existed but died in WW1. Ruth's Heckie was a ghost that she was actually seeing and it's not long before he appears to Ruth again. But what does he want? In helping him Ruth has to guard against is falling in love with a 'ghost'. She also has the further complications of Tommy and the fact that he clearly wants to be more than friends, and a certain Canadian by the name of Athelstan Blake who she corresponds with by email because he wants to write a biography of her aunt, who was a bit of a composer of music at one stage. It's all very complicated and none of it is helping the decision Ruth ultimately has to make about whether to sell this beautiful house that she feels such a connection to, and get back to London to rebuild her life and career, or stay on Skye and create another kind of life for herself.

Well, it's a few days since I finished The Glass Guardian and it's still there in my mind, hovering. Why? Well, it was just gorgeous for a start. I adore this kind of romantic type novel with secrets to discover, a bit of suspense, and most of all 'a ghost'. It's far more complicated than I've managed to describe. There's a diary and a lost love and the need to discover what happened. There's Tom, hints dropped along the way about him, and there's Stan and a mystery about who actually did write a piece of music that Janet was famous for. There's bereavement, grief, and guilt over her feelings about David, her partner, and the manner of his death. Difficulties too about her relationship with both her parents.

I have a romantic soul so the romance was right up my street. That too was very complicated as Ruth tried to sort out her feelings for all of the men in her life. The WW1 connection with Heckie was poignant and tragic and extremely well done. There was a very clever twist which I'm not going to go into. I didn't see it coming but it was just perfect.

I rather fell in love with the house, Tigh-na-Linne. A rambling old Victorian house with a stunning garden is my idea of the perfect home, and it really is a character in the book as much as Ruth or Heckie or anyone else. The garden sounded wonderful with its pond and dilapidated old bridge: when it snowed it turned into my idea of heaven! To have it on the Isle of Skye added to the pleasure for me as I have Scottish roots and have always wanted to visit that island. One day perhaps.

I loved the way the author managed to bring so many separate plot elements together to create a very satisfying book. It's atmospheric, full of suspense, beautifully romantic and beautifully written. No mean feat really.

Many thanks to Linda Gillard for sending me The Glass Guardian to read and review. It hasn't influenced my opinions, I would have loved it to bits whether I had bought it, borrowed it from the library or been sent it by the author. It's gorgeous. And I will certainly now be reading Linda's other books. Can't wait to be honest.

hooray! I am glad that turned out so well! I can tell i would have liked it also but it's not on this side of the pond yet and knowing how i put books in my tbr pile there was no telling when I'd get to it...let alone the cost of shipping overseas!

Really glad you enjoyed it!!!

What a brilliant review, you obviously enjoyed this one a lot. I got a real feel for the story and characters in your descriptions and can't understand why I haven't come across the author before.

I checked out all her books and couldn't find one that I didn't like the sound of, so Linda is definitely on my list of authors to read in the future.

Thanks once again for the brilliant recommendation.

Pat: I loved it, so thank you for recommending me to Linda. To tell the truth it would've been a perfect read for Carl's R.I.P. in the autumn but I couldn't keep it that long without reading it.

Thanks, Yvonne. I think you would enjoy this one and, if all of them are of the same standard, then I;m sure you would like any that you came across. Them seem like *you* if you know what I mean.

I HAVE to have this one, Cath! Can't wait until I can find a copy here!

It is available here in the USA atleast on Amazon! http://www.amazon.com/THE-GLASS-GUARDIAN-ebook/dp/B0088CQPOM

OHHHH I have to get this one!!!! It sounds awesome, Cathy, and I am reading all kinds of ghost and spooky stories right now. I've got to get it! Everything about it sounds perfect. I'm thrilled you loved it so much.

I'll be looking for this one, Cath. How fun to be able to read it as you have and to review it so enthusiastically. I see from other comments that it is available here on the states. On my list it goes.

This book kept me spellbound - glad you enjoyed it too! Actually it brought tears to my eyes.

Peggy Ann: I'm pleased to hear it's available in the US, If you decide to get it I hope you like it as much as I did.

Susan: The book was just beautiful, still thinking about it days later. It would actually be a perfect read for RIP... if you can wait that long. lol.

Interested to hear about the ghost stories you're reading at the moment, so I hope you post about them at some stage. I'm halfway through The Ship of Magic by Robin Hobb at the moment (for OUaT). It's fantastic, as are all her books, but lonnnnng!

Penny: Yes, it is available in the US, I assume along with all her other books.

Margaret: I meant to mention in my review that it had actually brought tears to my eyes towards the end, so thank you for reminding me to say it. Also, at the very end I let out a little sigh of satisfaction... something that I almost *never* do.

It's been delightful for me to read all these comments! All my books are available on Kindle and most are available in pb. The ones that aren't will be out in pb soon. Thanks everyone for your encouragement. :-)

So glad the ending worked for you, Cath. It was very tricky trying to resolve a ghost love story. Do any of you know the old movie, THE GHOST AND MRS MUIR? Basically the heroine just sits around for decades waiting to die so she can join lovely Rex Harrison, the nautical ghost. I was determined not to do it like that!

Thanks for coming to comment, Linda. As you can see, quite a few plan to try and get hold of The Glass Guardian and I really hope they do as they have a real treat in store.

Yes, I can well understand that it's hard to resolve a ghost love story. I've seen The Ghost and Mrs Muir but it must have been years ago as I don't remember anything about it, including the ending. Personally I think you ended this book perfectly.

I've not yet read any of Linda Gillard's books, but I do like this sound of this one.

Many thanks for sharing your review of it :)

Nikki-ann: Linda Gillard is certainly an author well worth trying in my opinion. My pleasure.