Two books by Agatha Christie to review today. One is fictional, They Came to Baghdad, the other non-fiction, Come, Tell Me How You Live. Both are set in the Middle-East, Iraq and Syria specifically, war-torn areas today, and not without problems back then of course. That fact made for an interesting read in the case of both books.

First up, They Came to Baghdad. This is my book 18 for Bev's Vintage Mystery Bingo challenge and covers the category, 'A book outside your comfort zone'. I had trouble thinking of a book for this category because there was nothing I could think of that was actually outside my comfort zone. I eventually chose this because I'm not that mad about espionage or spy type books and this that kind of book. 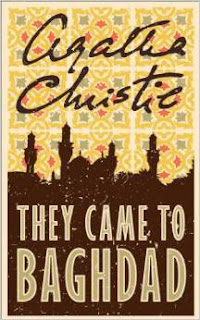 Victoria Jones gets the sack from her job as typist in London. She's not a very good typist so is not very surprised when it happens, although she was sacked for another misdemeanor. Sitting in the park wondering what to do next she meets a young man, Edward, and falls immediately in love. But he's off to Baghdad in Iraq to start a new job so it can come to nothing. But must it? On a whim Victoria gets a job as a companion to an American woman who's travelling to Baghdad. Once there she's on her own and sets about trying to find Edward. He proves elusive but she manages to fall into an adventure of her own when a man dies in her hotel bedroom. Victoria gets embroiled in some serious international espionage, working to find out what secret the man was carrying and what he might have done with it. One thing is for sure... it's unlikely Victoria will ever again be satisfied with a job as a typist.

I honestly didn't expect to like this as much as I did. As I said, spy yarns are not my thing. I find them confusing with their sometimes hard to follow plots and double agent doings and so forth. Not for me. But Victoria is a very engaging heroine... rather flawed in that she likes to lie her way out of situations rather than tell the truth. She is however brave and steadfast, seemingly undeterred by the set-backs that life throws at her. There's a lot of humour in this story - I was surprised by that but am not sure why. It's all a bit mad-cap to be honest as Victoria gets herself mixed up in some quite dangerous goings-on but always managing to extricate herself one way or another. I was genuinely surprised by the outcome of the 'mission'. I should have guessed but didn't. I thought that was nicely done. An enjoyable romp through 1950s Iraq and a thoroughly engaging book.

Next, Come, Tell Me How You Live. This is my book 30 for Bev's Mount TBR challenge and my book 10 for the My Kind of Mystery challenge, which is being hosted by Riedel Fascinaton, as it's a non-fiction written by a crime writer. 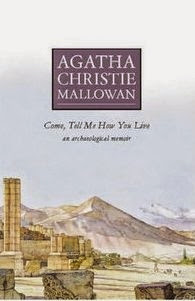 In 1930 Agatha Christie, already a successful crime writer, met and married Max Mallowan, an archaeologist. This was after her divorce from her first husband, Archie Christie. In the mid-1930s the couple set off for Syria, the first of a series of digs Agatha accompanied her husband on. In her foreward she stresses that Come, Tell Me How You Live is not an academic book. It's not about the nuts and bolts of archaeological digs, it's about day to day living, the trials and tribulations of living away from civilisation with only men for company. She calls it, '... small beer - a very little book, full of everyday doings and happenings'.

And I suppose that's exactly what the book is, but it didn't feel small or inconsequential while I was reading. Agatha describes in minute detail how it was to be at a dig in the 1930s. This was before archaeological digging became a science full of precise techniques. Back then anyone could go wherever they liked and dig up what they fancied. And I suppose a lot of valuable artifacts and knowledge was lost but it did sound like Max Mallowan's digs were very carefully undertaken.

I loved hearing about the various local natives that assisted the couple, especially the house servants and the mischief they got up to. Misunderstandings were rife of course as Agatha spoke no Arabic or any of the other tongues because as well as Arabs there were also Turks, Kurds, Armenians and Yezidis. The other thing is that it was all very primitive, but Agatha was made of stern stuff - she was only really bothered when one house they slept in was over-run by mice and cockroaches in the night and they crawled all over her face. She drew the line at that and had what she called 'hysterics'. Who can blame her...

One sad thing that struck me was how little has changed in the area of Syria and northern Iraq. She says:

'We come to the question of religions generally - a very vexed question in this part of the world, for Syria is full of fiercely fanatical sects of all kinds, all willing to cut each other's throats for the good cause!'

That shook me rather. It was written in the 1930s and, over eighty years later, nothing has changed. I actually found it very strange to be reading about various towns that are now centre-stage in world affairs, which were then so remote and peaceful. Tragic.

On a more cheerful note it was interesting to compare the two books in this post, one fictional, the other non-fiction, but both set generally in the same area. In They Came to Baghdad Christie talks of one of the archaeologists travelling to Iraq with a suitcase full of books and his clothes shoved in around them. Which, in Come, Tell Me How You Live, is exactly what her husband, Max, did. Victoria in They Came to Baghdad spends a few weeks helping at an excavation and clearly Christie used her love of this life she led to help her with this section and embue Victoria with the same enjoyment and sense of inner peace it brought her.

This is a gorgeous little book. It's written with gentle humour and a great deal of love... for the natives and for the beauty of Syria. I would call it a gem quite frankly. I'm going to read the other crime novels she set in this region, Murder in Mesopotamia is one I think, and Appointment with Death, both Poirot novels. I'm also going to read Agatha Christie's autobiography at some stage and am now really looking forward to finding out a lot more about this extraordinary woman.

hmmm sounds a little like getting a jump on Rip!.. I am saving the review for Witches until rip begins lol.. am more then 1/2 thru Others by James Herbert I think this could be for rip also, crime oriented..very interesting main charactor...anyway glad you enjoye Ms Christie!

Pat: The RIP post is up. It's too late for me to get a post up now but hope to do it sometime tomorrow.

I don't think I've ever read anything by James Herbert, always thought he was far too scary. LOL!

I have not read either of these but they sound very good. I never thought of reading Come, Tell Me How You Live, but it sounds like I would like it. Great reviews.

Tracy: Come, Tell Me How You Live was a huge surprise to me. I wasn't expecting such a fun, enjoyable read.

Cath: It's been a long, long time since I read They Came to Baghdad...Christie's spy/thriller novels usually aren't my favorites and I honestly can't remember what I thought of this one. Glad to hear you wound up enjoying it.

Bev: I'm just not a spy or thriller book reader really. Not my favourite genre at all, which is why I chose it for 'Out of my comfort zone'. Thus, I was very surprised at how much I liked the book. It helped I think, that it reminded me of her non-fiction book, Come, Tell Me How You Live.

I love Christie's self-deprecating sense of humour in this book, especially the beginning when she goes looking for clothes for the journey. It's been many years since I read it but I've never forgotten that scene.

Lyn: There's a lovely vein of humour running all the way through the book. I don't know why it took me by surprise but it did. She clearly had a very lively sense of humour.