The end of January is still a couple of days away but as the two books I've just started - see sidebar - are long I know I won't finish anything else now before the end of the month, so I may as well do my 'Books read in January' post now.

Well goodness, it's been an interesting reading month. I kept to my decision not to try and read loads of books just to get my numbers up and have read just six books for the first month of the year. I'm very happy indeed with that.

These are the books:

1. A Fire Upon the Deep - Vernor Vinge

6. Mountains of the Mind - Robert McFarlane 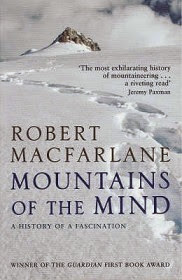 Ostensibly this is a book about the history of mountaineering and truthfully that was all I was expecting. What I got was an awful lot more. It's more like 'The History of Everything' as McFarlane takes the reader on a wonderful trip, firstly through the geology of the planet, then on to how our mountains were formed, where they were and are now, how old they are and so on. He moves on to people's attitudes towards mountains... at first they were considered a blot on the landscape until slowly, during the 18th. century, attitudes changed. People realised that they were actually beautiful, could present a challenge found nowhere else, and that they were the epitome of the 'sublime'.

The author gives us all of this but also intersperses the history with his own experiences climbing mountains all over the world. Fascinating stuff. I mean really rivetting. Some of his adventures will make your hair stand up on end! Of the history chapters my favourite by far has to be the one that dealt with the ill fated George Mallory who became obsessed with Mt. Everest in the 1920s and died on his third attempt to climb it. But what really made this book for me was the beautiful writing. Not only does McFarlane make the historical parts very readable and interesting, he writes lyrically and magically about the mountains themselves. It's quite captivating and I found myself wishing the book was a bit longer than its 280 pages. Brilliant read, sure to feature in my best non-fiction of 2015.

Like I said, an interesting reading month and this was mainly because of the variety of the subject matter of the books. I started with a terrific science fiction adventure, read a modern comedy drama by Dawn French, and then followed those with two books about mountains which were very different to each other. In between I squeezed in two of C.S. Lewis's Narnia books which I am rereading this year, having borrowed the set from my grand-daughter. I have to say, I love a reading month that includes this kind of varied reading and am hoping to continue it throughout the year.

Favourite book of the month? Very difficult and in the end I think I'll have to call it a draw between A Fire Upon the Deep by Vernor Vinge and Mountains of the Mind by Robert McFarlane.

And because I seem to be a bit hooked on books about mountains at the moment, here's a new one I just got from Amazon Marketplace: 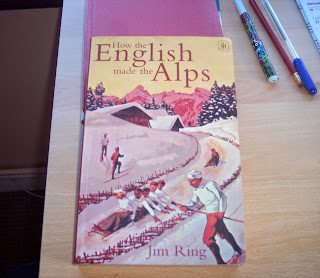 wow .. you did good sis! I love hearing when you get a book that is more and better then expected! Those truly are the books we wish wouldn't end!

I did super good this month..but it wasn't from "trying"..they were just all pretty good and mysteries to keep me picking up the books. and though most were at least 350 pgs many were double spaced so they were easy reads.

I doubt I will hit another month as good as this one but that's fine. As soon as I start a Bio or historical book things slow down lol (add to that they are usually very long books!)

Keep enjoying your reread of Narnia! you are making me consider a reread..they are always a joy.. like seeing a favorite movie for a second time.
x0x0x0...

Oh, you're reading Greg Iles' THE QUIET GAME. Lovely. I read it last fall. I was trying to read all the Penn Cage books in preparation for my book group discussion of NATCHEZ BURNING in April.

Your mountain book made me think of INTO THIN AIR, which I read many years ago. I was riveted and cold. Mountain climbing would not be for me, but I do like reading about it.

I'm intrigued by Mountains of the Mind and just put it on my TBR list in my library system.

A good mix of genres!

I'm sure I'd like Mountains of the Mind - I think I'll suggest it for my local book group - it's a book I think a lot the members would like too.

It'a been years since I read the Narnia books - do they stand up to the re-read?

Have you had much snow? we've had a mere sprinkling so far - let's hope it stays away from this corner of the UK!

That Mountains book sounds very tempting .....(your blog is still dangerous for my tbr pile...lol)

It took the whole of December and part of January to get through The Luminaries so I feel quite overwhelmed by your January list. Lots of inspiration in it, though, as ever. My TBR list grows longer.

Very nice reading month, Cath! I only got 4 read but 2 were over 300 pages which long for me so I guess it's all good.

Looks like you are off to a good start for the year! My numbers for the month are more about graphic novels than any grand desire to read a bunch of books this year. I hope you continue to have a good reading year!

Pat: You're so right about unexpectedly good books.

I'm not sure if I don't prefer the Narnia films to the books now.

Kay: Yes, I'm reading The Quiet Game. Taking it slowly as the plot is quite complicated.

I've made a note of Into Thin Air. I can't stand heights so could never climb mountains! I'll read about it from the comfort of my armchair.

Penny: Mountains of the Mind is well worth seeking out. Such a beautiful book.

Margaret: Judging by other non-fictions you have liked I do think you would like Mountains of the Mind.

To be honest, no I don't think the Narnia books do stand up. I loved them as a child but now it feels like C.S. Lewis was talking down to his readers. Not keen any more but I shall reread them all as they may vary.

No, no snow down here as yet but maybe some on Sunday they're saying.

Val: Sorry! I keep saying that don't I? LOL!

Maureen: I think The Luminaries is quite a long book so congrats on actually finishing it!

Peggy: Yes, several of mine were quite long too but that was my plan for this year, to get some of the long books read.

Kelly: Thank you. I don't have any grand desire to read a certain number either... just to get a few off the tbr pile.

Wow, what a lot of good books you read, Cath! I have to get the McFarlane book now, you realize this :-) I'm so glad you enjoyed the Vernor Vinge so much. I'm off to read your actual review of it now. The main thing for this month is, you enjoyed all the books you read. That's the best!

Susan: Six is not bad. I'm determined not to feel obliged to try for ten a month this year. Six has always been average for me and that's fine.

I'm dying for you to read the McFarlane book! I really think you'll like it. I just discovered that my town library has the Wade Davis book about Mallory and Irvine so I'm going to go and grab that this week sometime. He was he on the doc I watched about filming on Everest. Last night we watched the doc about The Eiger. Amazing.

I really did enjoy all of the books and will be quite happy if every month is as good as this.