I haven't read any psychological type crime yarns in quite some time as last year I concentrated mainly on Vintage Crime books. That was vastly enjoyable but I suddenly fancied something a bit more unsettling. This is the type of thing that I don't really like to watch on TV as it creeps me out too much but I have no problem with it in books. So anyway, the library supplied what I was looking for.

First up was Sworn to Silence by Linda Castillo. This 'new to me' series was recommended by Kay at Kay's Reading Life and this is book one in the series. 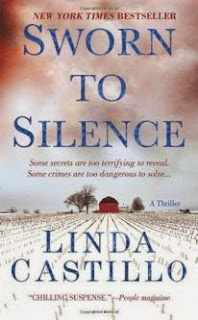 The Chief of Police at Painter's Mill, Ohio is Kate Burkholder. The town has a large Amish population and Kate herself was brought up Amish but left the religion/way of life in her teens. Thus, her relationship with her family and former Amish neighbours is almost non-existant. And life isn't that easy as a female chief of police either. Her fellow police officers have accepted her but dealing with town politics and politicians with personal agendas is never easy.

A body is discovered in a snowy field by a police officer chasing straying cows. The young woman's body is severely mutilated and it's obvious she's been murdered. Sixteen years ago there were several identical murders, is the killer back? Kate has a terrifying secret in her past which makes her think this serial killer can't be. But might she be wrong?

I must say a big 'thank you' to Kay for suggesting this series as this book was rivetting. A real pageturner. I really liked Kate and felt for her in her difficult situation. So much unfairness and injustice in her life and that made this book much more than just a crime yarn. The wintery, Ohio setting was superbly portrayed and I felt myself there in all the snowy bleakness. I will say that this book is not for the faint-hearted. If you don't care for gory descriptions (think Tess Gerritsen) and psychological type crime scenarios then this might not be for you. Personally, I couldn't put it down and have already put the next book on reserve at the library.

After that I fancied yet another psychological type thriller so I moved on to The Killing Place (or Ice Cold) by - funnily enough - Tess Gerritsen, book 8 in her long-running Rizzoli and Isles series. 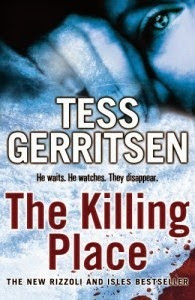 Maura Isles is off to Jackson Hole in Wyoming for a medical conference. Her personal life is complicated at the moment because of who she's heavily involved with. At the conference she comes across Doug Comley who was at medical college with her, although the two were not really friends. He has his 13 year old daughter at the conference with him, plus two friends, and at dinner one night he tells Maura that they're all going to head off to a lodge in the mountains when the conference ends. He eventually persuades Maura to go with them. Things start out well but deteriorate when the sat nav sends them up the wrong road on the mountain. The car ends up in a ditch and the four adults and a child are stranded. There's no mobile phone signal and they didn't tell anyone where they were going. (This strikes me as TSTL... Too Stupid To Live!) They start out walking and come across a small settlement in a snow filled valley. What is this place? Why does it appear like a Marie Celeste scenario where people have disappeared off the face of the earth in the middle of their meals? Something is not right here and Maura knows without a shadow of a doubt that they need to get out of here and back to civilisation as soon as possible. But how?

Cracking good read this one. Tess Gerritsen never disappoints, her books always gallop along at breakneck speed, scaring you to death half the time but always hugely enjoyable. *If* you don't mind the fact that they are a bit gory. She doesn't spare the reader any details of autopsies and some of it does make you shudder a bit. Her main characters, Jane Rizzoli and Maura Isles are not blonde bimbo type women, they're intelligent, thoughtful, 'different'. Very different to each other too and I like that. The plot here seems simple but, typically, it turns out not to be. I thought I had it all worked out and of course that was nonsense. LOL! Good stuff. I won't leave it so long next time before I read more in this series.

I love a book that you just can't put down ....I think I may take a peak at the first you describe as it sounds quite intriguing. I'm mixed on gore and description sometimes it's fine sometimes I wimp out. I love Val McDermid's books but have to be in the right mood or her descriptions can be too disturbingly real.

Oddly, I haven't read anything by Val McDermid and am aware I'm missing a good author. Must check to see what the library has.

oh and I am not ready at all for OUaT!!! can't seem to get my head out of crime books...but wishing they were more Gothic than they are and more deep family secrets to find out... oh goodness. What do you have good for OUaT?

These both sound good, Cath. I do tend to read books I would never want to watch play out on the screen.

I've been into William Kent Krueger lately, at the suggestion of another blogging friend, and really enjoying him. Crime, psychological thrillers set mostly in upper Minnesota, small town, adjacent Native American reservation, different cultures. You might like him.

Pat: Yeah once I get reading some of these crimes yarns I can't stop and I whizz through them at break-neck speed. LOL I haven't seen R&I on the TV but my daughter says the TV series is very different to the books. A lot less scary on TV.

Same here with the crime books.

What I really want to do with OUaT this year is read several of the really chunky fantasy books on my shelf. Then I'll feel like I really achieved something.

Penny: Oooh... I shall investigate WKK in a moment. The type of book and its setting sounds like just my thing.

Oh, Cath, I just saw Sworn to Silence on sale at Book Depository! Maybe I should jump back over there and get it!

Peggy: Either the BD or grab it from the library as it's a good book.

Jackson Hole sounds wonderful in the book... well the mountains around do. I would love to go.

I love crime fiction, but I've yet to read these two. Tess Geritsen it's a wonderful author too.

Nikki-ann: I agree, Tess Gerritsen is a really amazing author.