It's been a busy month for me, Easter holidays and fun family things at the start of the month and then the garden which, after a long winter was looking woeful and neglected. It's now looking less so - veggie patch cultivated and seeds growing, flower beds ongoing and will be for some while. And so my reading has suffered a bit but that's the way it goes sometimes and it can't be helped, some months are full of reading, others not so much.

So anyway, from eight books in March I'm down to five in April and these are they:

23. Pray for Silence - Linda Castillo. This is book two of the author's Kate Burkholder series set in Amish country in Ohio. 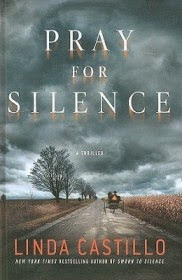 This is the Goodreads blurb: The Planks moved from Lancaster County, Pennsylvania to the small Amish community of Painters Mill, hoping to resume the comforts of the Plain Life in Ohio. Less than one year later, the family of seven is found dead--slaughtered on their own farm. Police Chief Kate Burkholder and her small force have few clues, no motive, and no suspect. Formerly Amish herself, Kate is no stranger to the secrets the Amish keep from their "English" neighbors--and each other. When the diary belonging to the rebellious teenager Mary Plank turns up, Kate is surprised to find not only a kindred spirit but a murder suspect: the charismatic stranger who stole Mary's heart.Then there's Mary's brother, Aaron. Shunned by his family and the rest of the Amish community, could he have returned to seek revenge? Now it's up to Kate to search for some dark truths about the Planks--and confront long-buried secrets of her own. As Kate's obsession with the case grows so does her resolve to bring the killer to justice--even if it means putting herself into the line of fire . . .

I think this one was even more gruesome than the first book in the series. I loved it! Again, as with the first book, it was a real pageturner as more and more secrets were revealed. The Ohio setting is very well portrayed... I have been to Ohio so it was a bit of a nostalgic read for me. I like Kate Burkholder very much, she's not perfect and she's had awful problems in her past but is hanging in there and doing the best job she can. I thought I had the solution all worked out but of course I didn't at all. An excellent crime read but not suitable if you're not keen on gruesome descriptions.

This month I seem to have concentrated quite a lot on Carl's Once Upon a Time IX challenge. Three of the books were for that and all three were enjoyable, particularly Seraphina by Rachel Hartman. I also enjoyed Linda Castillo's second Kate Burkholder book, Pray for Silence, and am pleased to have more of those to read next month.

So... my favourite book? Well it was my only non-fiction book this month, and I've yet to review it, but it was this:

Agatha Christie's autobiography. More about it within the next few days but I thought it was utterly delightful. Probably the best autobiography I've ever read.

No idea what I'll be reading next month. I have eight library books and a TBR pile of hundreds, so I'm hoping I'll find something I like. Happy reading in May!

I am happy if I do 4 in a month (one a week) I've surpassed that lately but feel myself slowing down, not sure why. ..but ok with that too. Long as I am reading something even if only 1/2 hr a day. The Agatha Christie sounds good (like I need another bio?! not!) I may look into it or keep an eye out for it in the thrift stores!

I have avoided the Castillo series because of the gruesomeness. But you liked it a lot and I have read other positive reviews. Maybe someday I will give it a try.

Reading has to give way sometimes!
I couldn't agree more about Agatha Christie's autobiography! It was just like hearing her talk - I loved it.

It's a long time since I read the Autobiography but I can still see the pictures she drew in my head!
I agree with BooksPlease :o)

You've read alot! my reading has been rubbish :o(
But I have been listening :o)

Good month, Cath. I haven't even finished the one book I have read! Worst month ever for me!

Pat: I thought you did really well this month.

I know you would *love* the Agatha Christie book but the print size is a problem.

Tracy: Yes, parts (small) of the books are gruesome but I just skate over those quickly.

Margaret: Yes, it does. And it's not a problem, the grandkids are only young once so you have to enjoy them while they are.

I expected the AC to be good but was surprised to find it even better than I expected.

Val: I know... she just brought her whole life alive. I've now ordered a biography of her life because I wanted to read about her from another perspective.

Peggy: Thanks. Yeah, it happens sometimes. I expect you've had a busy month with other stuff.

I think I've said it before but is just delights me that we read just about the same amount of books. I'm a little behind, having just finished #23, but I started a couple and didn't stay with them. I really do want to read AC's autobiography.

Nan: I love this too. This year is a far more typical year for me than last year. You will catch me up this month as I've just started a book that has almost a thousand pages and will certainly take me a couple of weeks to read, if not more.

The AC biography would a perfect read for you. I'll get my review up over the next few days but not today... today is a grandson day. :-)