Sometimes you're just in the mood for 'gentle'... as in books that are undemanding, charming, humorous... gentle. Which is how I ended up reading a couple of Angela Thirkell books in a row. First up, August Folly. 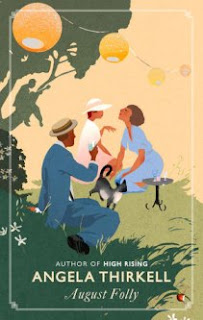 The Dean family, mother and father Rachel and Frank, and six of their nine children are coming to the Dower house for the summer. The oldest son, Laurence, 27, is to inherit the Palmer estate, the Palmers being childless. 'Organising' Mrs. Palmer is putting on a play for the village and has decided that it will be the Greek play, Hippolytus. The plan is to rope in the Dean family to act in the play and also the Tebbens, whose son and daughter, Richard and Margaret are also home for the summer. Richard is rather self-centred, his parents' golden boy, didn't work hard at university and thus got a third for his degree. Margaret has been working abroad, where she knew Laurence Dean quite well. Richard is dreading the summer with parents who annoy and embarrass him, but has reckoned without the irrepressible Deans.

These Angela Thirkell novels are sheer delight from start to finish. This one had a lot of characters so it was necessary to concentrate a bit to remember who was who but even I managed to get there in the end. The story is basically a romance but Thirkell did not write in a sentimental manner about people so these stories are not soppy in any way. They're full of humour and very accurate as regards human failings. I love how Richard, in his early twenties, falls for the middle-aged mother of nine children. The eldest Dean girl, Helen, is so possessive of her brother, Laurence, that she's made miserable when he seems to be falling for Margaret. And the children in Thirkell's books are always so real... there's even a couple of mentions of Tony Morland from previous books. All in all... delightful. I have a feeling I'm going to end up with a massive collection of Angela Thirkell's books. 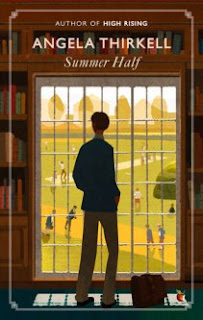 Colin Keith is studying for the Bar but decides that he shouldn't be so dependant on his parents and takes a post as a teacher at Southbridge School for boys. The head master and his wife have two daughters, one of whom, Rose, is engaged to Philip Winter a teacher in the same house as Colin. Rose is beautiful, but far from clever. She's also flighty and likes to have the attention of every man in the room. It makes Philip edgy and unpredictable. Colin has two sisters, Lydia, still at school, and the beautiful Kate. Colin's house master, Everard Carter, falls for Kate but Kate seems to be interested in someone else. Add in two schoolboys, Eric Swan and Tony Morland from Demon in the House, now older but still irrepressible, and you have a recipe for much drama and highjinks both at school and during the holidays.

This Angela Thirkell again has a 'huge' cast of characters, all of them very individual with quirks and flaws that make them very real. I always like a book set in a school so that was delightful too and it was very nice to see Tony Morland again, who hadn't changed much in the intervening five or so years. The romantic tangles and misunderstandings were of a similar nature to August Folly, at least in one instance, but as I enjoyed that aspect that was fine. Again there was a lot of humour to the fore mainly as regards the quirks in human nature. One thing strikes as you read these books, set in the 1930s, and that's how much fun the children had outdoors. Even the older ones at 16 or 17 were happy getting messy clearing out a pond or swimming in the river. And reading! Goodness they were well read. They seemed so much younger than modern kids of that age which was rather refreshing. Another super read from Angela Thirkell... I gave both books a five on Goodreads.

August Folly and Summer Half are my books 18 and 19 for Bev's Mount TBR 2015 challenge.

Very nice reviews. Maybe I should try her again.

I don't think I have ever read any Thirkell, perhaps I should try one next time I want a gentle read. And the covers on these are delightful and very much of that era, aren't they? At the moment my 'gentle' reading requirement is being met by rediscovering R F Delderfield. I picked up the first volume of ' A horseman riding by' which has been on my 'old favourites' bookshelf for years. I had forgotten ( a) what a cracking storyteller he is and (b) the sheer quality of his writing, very similar to Thirkell in his characterisations and really capturing the atmosphere at the beginning of the 1900s. The font is tiny though so I was thrilled to discover that his works are now available on Kindle so I am treating myself to some nostalgia! I have an idea that some of his novels were set in a school, too. He was the Editor of one of the reputable West Country papers, I believe - his descriptions of your part of the world would appeal to you, I think.

This has reminded me I have one book by Angela Thirkell - High Rising. I'd like to read that soon - along with many others.I'm in the mood for 'gentle' books too, so I'm reading Fresh from the Country by Miss Read, alongside A Mood for Murder by Frances Brody, which is not exactly 'gentle', I know but is easy reading. Today I spent most of the time in the garden, not much reading done and nothing to go on the blog - I'm behind again with writing about the books I've read. Ah well, so be it, it's that time of year.

it amazes me that you can be reading books AND doing a puzzle! I would be torn to finish one or the other ! lol.. At least we keep ourselves occupied !

Lovely reviews, Cath. I keep meaning to read these and now you have given me incentive. Hope all is well with you.

Nan: I think some books are better than others. They also stand alone and I think August Folly would be a nice one to try if you fancy trying again.

Rosie: The covers are the new Virago reissues and yes... I do think they're absolutely gorgeous. You're most welcome to borrow mine if you ever decide to try them.

Goodness, I remember A Horseman Riding By with er... John Duttine... was that his name? The series was a 'must watch' but I must admit I've never read any of the books. I have heard that they are delightful though. Yes, he was a schoolmaster I think, at least in the later series.

I've just started the second Gordianus book and am enjoying it very much.

Margaret: I do love a bit of Miss Read. Haven't read any in a couple of years now.

We've finally bitten the bullet and got ourselves a gardener to help with some of the heavier work in the garden. No idea why we didn't do it before... well yes I have, Hubby resisted it like crazy. Now he's completely converted.

Pat: I like to ring the changes. An hour reading, an hour doing a puzzle. You're so right... I'm never bored.

Penny: They're a lovely, charming, amusing set of books... hugely popular and perfect for a comfort read when you don't want anything too taxing.

I have read August Folly this August, review coming shortly on my blog. I certainly like Angeka Thirkell now and will slowly work my way through her gentle tales.

Jo: I've read 4 or 5 I think and August Folly is one of my favourites. I shall pop over and read your review.