The Lake District Murder by John Bude (co-founder of the Crime Writer's Association) was not quite a 'random grab' from the library... that hints at a book never heard of before and I was well aware of this British Library Crime Classic when I saw it on the library shelf. I'd seen reviews on blogs and mentions on Goodreads so I was pleased to see it and happily grabbed it to read. The cover, a railway poster of Ullswater, is gorgeous but isn't credited to any particular painter on the back cover, which is a shame in my view. 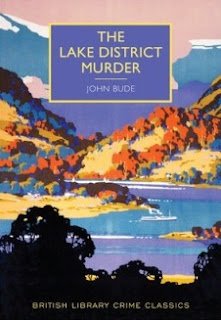 Edited to add: Margaret at Booksplease tells me that the artist is John Littlejohns, a Cornish artist.

The body of the part-owner of a garage business, Jack Clayton, is discovered in a car in the garage and because of the circumstances it's assumed he's committed suicide via carbon monoxide poisoning. Inspector Meredith of the Cumbrian police is not convinced though. The man was clearly just about have a meal, why would he suddenly decide to go and kill himself? He was engaged to be married too, a contented man by all accounts. Meredith checks the Clayton's bank account and is surprised to discover that the part-owner of a garage that's only doing averagely well has rather a large nest egg. Further enquiries bring forth the information that he and his fiance were going to emigrate to Canada after the wedding but that his partner in the business, a man named Higgins, was unaware of this.

Meredith soon has his prime suspects but is distracted by their involvement in what might be a petrol delivery scam. Really he has two cases to solve and everyone involved in one case seems to be involved in the other. Surely they must be connected? Meredith's task is to find that connection and then prove it. Easier said than done.

OK, well this is no 1930s Agatha Christie type yarn with a body in the library or someone done away with in a stately home or on the 4.50 from Paddington. It reminded me more of Dorothy L. Sayers' writing in that it goes into clues and methods and timings in minute detail. You needed your wits about you to follow it, to be honest, and weirdly I did actually manage to do that, unlike Dorothy L. Sayers who was so clever she did sometimes lose me. Where it differs from Sayers (and Christie) is that this is very much a police procedural story which outlines how very difficult their job can be when there are few leads, or when they know who's done the deed but have to prove it so that it'll stand up in a court of law.

The Lake District setting was good but not brilliant, I didn't get an amazing sense of place but that's because these days we think of The Lake District mainly as a beautiful tourist destination (forgetting that people live and work there perhaps) whereas back then it was possibly a bit less so. This book focuses more on the everyday lives of the resident population and is thus, probably, more real. Although, where there are descriptions of the mountains and countryside they are nicely observed.

I thought this was not a bad book. Not wonderful, but not bad. For me it lacked the kind of characterisation where I identified strongly with the detective. In Sayers' books this is not lacking - I adore Lord Peter Wimsey and Harriet - and that makes for a big difference. Big enough that I give her books a four or a five on Goodreads and this one got a three. I enjoyed it well enough but wasn't transported into ecstasies by it.

There are quite a few of these reissued British Library Crime Classics around now... all with gorgeous covers but from what I can see the quality of the stories varies a bit. I own one other, Mystery in White by J.Jefferson Farjeon, a Christmas mystery which I'll be reading soon along with some other Christmas books. I'll also keep an eye out for other BLCC books as I think the idea of reissuing 'lost' crime classics from the 1930s is a really excellent one.

the cover is quite nice! but sorry it wasn't all you hoped for.

I love when you write Lord Peter Wimsey.. the name alone conjures up old London and a crime scene lol. At this rate you will read more books than me by the end of the year...but that's ok sis :) I've slowed down tremendously since crocheting a bit . You do such good reviews I wish I could do that..I don't like taking notes along the way and when I am done with a book about all I remember is "I liked it"... or "didn't" lol

I read this book last year. I liked the cover too and tried to find out more about it - it's by John Littlejohns, a Cornish artist, see this website - http://www.travelpostersonline.com/ullswater-lake-district-cumbria-vintage-lner-travel-poster-by-john-littlejohns-428-p.asp. It really should be credited on the book!

I quite enjoyed it - I gave it three stars too. We'd just had a holiday in the Lakes and taken a boat trip on Ullswater and so could follow the action quite easily, but what I did find difficult was following the calculations Meredith and his colleagues carried out to work out petrol deliveries to the local garages, the lorries’ loads and the petrol storage capacities at the various garages. I am so impressed you worked it out!

And some of his posters have been turned into jigsaw puzzles!
see http://piningforthewest.co.uk/tag/john-littlejohn/
and here http://products.psbooks.co.uk/book/Jigsaw-Puzzles

I agree with your quality statement. But that doesn't stop me from buying them up! I think a few of the authors weren't up to the caliber of Sayers or Christie, but I still like reading them for the ambience, the feeling of the time and place. That said, I didn't get very far in the Cornish Coast Murder. It wasn't what I hoped for, but I shall go back to it sometime. I am just so thrilled that they are being reprinted. I have found many gems in old books I had never heard of, and am hoping some of these may be in that category.

I think you're way ahead of me with numbers of books read this year. I got distracted by jigsaw puzzles for months. lol And now you with crochet. I think whatever makes you happy you should do. Life is short and your books aren't going anywhere.

Margaret: Thanks for telling me who the artist is, I've edited my post to credit him.

LOL... I have to say that I didn't work it out at all, but I was able to follow fairly well what they were talking about. Not quite sure that all that detail was necessary though. I also got the culprit wrong as I was convinced there would be a twist at the end.

Val: Ooooh! I shall go and check those out in a moment.

Nan: I'm really not surprised you're collecting them. I was in a bookshop the other day and they had a whole display of them. It was all I could *not* to buy armfuls... I'll bear in mind what you say about the Cornish Coast one, and maybe borrow that from the library if I see it.