A Couple of titles

Catching up a bit today. Naturally things are rather busy at this time of year so moments to read are rather snatched and a bit brief. I've been reading three books over the last couple of weeks, one, The Woodlanders by Thomas Hardy, is going to take me into 2016 I feel, but the other two have been excellent entertainment for a busy December. 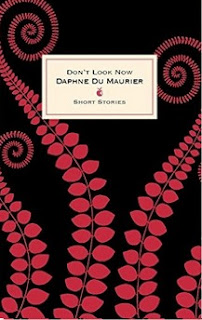 This is a collection of five long short stories, so I'll briefly outline each one.

1) Don't Look Now is set in Venice and concerns a couple, Laura and John, who have recently lost a young daughter. The husband hopes the holiday will help to heal his wife's grief. While eating in a restaurant one night they notice two sisters, one of whom is blind. The sister who can see tells Laura that her blind sister can see their dead daughter at the table with them and that she is happy. Laura is convinced by what the sisters say but John is highly sceptical. From then on events spiral right out of control. This was a powerful story of loss and grief and how we each deal with it differently. There's a strong sense of Venice, even though I've not been there I was able to see it very clearly. I like the strangeness of the tale, it was made into a film in the 1970s which I didn't like half as much as the written story.

2) Not After Midnight is set on the island of Crete. A schoolmaster takes a holiday on Crete in order to paint. He's not happy with the accommodation he's given and forces the management to let him have a chalet that's not supposed to be in use until later in the year. The management are unexpectedly cagey about letting him have the chalet which is away from the main buildings, on the edge of the sea. Apparently the previous occupant died in mysterious circumstances. Across the inlet a couple have another chalet and the obnoxious husband invites him over but 'not after midnight'. The schoolmaster soon realises that there is something very odd indeed about the couple. This one held my interest from the beginning with it's meandering explanation of what happened to the main protagonist and how trouble found him even though he wasn't looking for it. The story, although set in the 1970s, had quite an old-fashioned feel to it... almost in the style of H.P Lovecraft I thought. Excellent... though the ending was a bit weak.

3) A Border-line Case. Actress, Shelagh, is at home helping to care for her dying father. She's alone in the house with him, staring out of the window when he sits up straight, stares at her, utters a few words and keels over, dead. After the funeral, Shelagh decides to go to Ireland to look up an old friend of her father's that he had lost touch with. Nick lives on an island in the middle of a lake and Shelagh decides to pose as a journalist in order to gain admittance to the home of this recluse. Her plan works but not before she becomes very concerned for her own safety. What's going on here? A nicely written 'Mary Stewart' sort of story with two twists, one of which I guessed from the beginning, the other not at all. I liked this story as well, although I did question the morality of the main characters.

4) The Way of the Cross. A group of tourists from a cruise ship stop off to visit Jerusalem. They're all from the same picturesque and wealthy village in southern England and are a motley crowd of well-heeled middle-aged couples and two newly-weds. Their own vicar was supposed to accompany them but is ill, so a young vicar from the north of England (Huddersfield I think it was) takes his place. The company is not happy. This was really a study of people and their behaviour. So astute was Daphne Du Maurier at judging people that I was reminded of Agatha Christie's Miss Marple stories, although this is not a murder mystery. The setting of Jerusalem was fascinating, the author clearly knew the city well and brings a lot of biblical and historical references to the tale. Not the strongest story in the collection, and not really strange in the manner that the others are, but I still enjoyed it very much.

5)The Breakthrough. An engineer is sent off to the wilds of coastal Norfolk to work with another group of scientists whose work is secretive and 'off the radar' so to speak. Reluctant to go, he does decide to stay once there, only to find the work being done is rather unsettling. It involves three machines, hypnosis, a child, and a young man dying of leukemia. I won't say any more as it would involve spoilers but this is a very odd story indeed... scientifically frightening and leaning towards science fiction in tone. It's extremely well excuted with a very strong sense of location. The marshes of the Norfolk coast feel very real indeed, increasing the sense of isolation and unease. I liked this a lot.

All in all, this is a very strong collection of short stories. Beautifully written, not that you would expect anything else from Daphne Du Maurier, but I was even more impressed than I thought I would be. Each story has a very strong sense of place and I liked the fact that very few of the characters were all that likeable... the ambiguity of most people's personalities was very nicely portrayed and that made for interesting, absorbing reading. Highly recommended.

Lastly, A Murder is Announced by Agatha Christie. 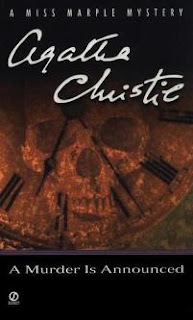 An announcement in the personals section of the local paper reveals that a murder will take place in a certain house at a certain time in the village of Chipping Cleghorn. The villagers thinks it's a game and turn up to see what happens. What happens is that the lights go out, a man enters the room and fires a gun, leaves and then is found outside on the floor with a bullet in him. Suicide is assumed but Inspector Craddock is not happy and continues to investigate. Eventually Miss Marple arrives to help but so much about the case is terribly complicated, especially as it starts to be suspected that some people are not who they say they are...

An excellent Miss Marple story, although if I have one complaint it's that Miss Marple herself doesn't appear until about 80 pages into the book. I love her philosophising about humanity. She's an expert in people's weaknesses and the things they will do to get what they want and I could read endless pages of it quite frankly. So there wasn't enough of her in the book for my money, but still, an excellent murder mystery. Complicated, with lots of red herrings, and all life was there in the one small village. Christie was such a good portrayer of all kinds of people, I think like her own creation, Miss Marple, she must've been a keen student of the human condition. Super writing too, I thought this was just perfect:

"Miss Marple gave the [shop] window her rapt attention, and Mr. Elliot, an elderly obese spider, peeped out of his web to appraise the possibilities of this new fly"

I look forward to reading a lot more Agatha Christie in 2016 as I work my way through Bev's Vintage Mystery Cover Scavenger Hunt challenge.

A Murder is Announced is my book 24 for Bev's 2015 Mount TBR Reading challenge.

I like long short stories - and Daphne du Maurier wrote really good ones. I've read a few of her collections but not this one. I think short stories are ideal for this time of year.

Margaret: It strikes me Daphne Du Maurier was a master at the short story as another collection I read by her was excellent too.

Thank you... I'll be reading a lot more AC in 2016. Enjoyed And The There Were None on the TV too, although it was much darker than I remember the book being.