I seem to be permanently trying to keep up with reviews these days. And it's not that I'm reading *that* much, so I've no idea why this is. I think possibly I read these two books really quickly as they were 'quick reads' and enjoyable, so that helps you fall behind no end.

Anyway, first up is Slade House by David Mitchell, which I read because I saw on Goodreads that Margaret at Booksplease was reading it and thought it sounded rather good. 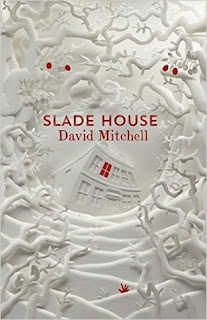 Slade Alley is dark and narrow and very easy to miss. Most people don't even know it exists and they certainly don't know of a certain Slade House. Unsurprisingly, as it was bombed out of existence during WW2 and shouldn't really be there. But every nine years on the 31st. of October it is for a chosen member of the public who is enticed inside. The problem for that person is not entering through the mysterious small iron gate, it's leaving... anyway at all. Someone inside the house wants something from each person they take captive. But what?

Well, this would be a perfect read for R.I.P. in the autumn. It's my first book by David Mitchell so I've no idea whether or not it's typical. I've always thought of his books as challenging but this was not, so perhaps it isn't like his other books? Regardless... this is basically a very well written supernatural story. It read to me like a Victorian or Edwardian ghost story but is actually set between 1979 and the present day. It also reads like series of short stories as it retells the experiences of each person who is kidnapped, I gather this has something to do with it being started on Twitter as an exercise. Whatever, it's very enjoyable ghost yarn which is nicely executed and quite scary... I enjoyed it a lot.

Next, Death of an Airman by the wonderfully named Christopher St. John Sprigg. This is my book five for Bev's Vintage Mystery Cover Scavenger Hunt challenge and covers the category 'Plane'. 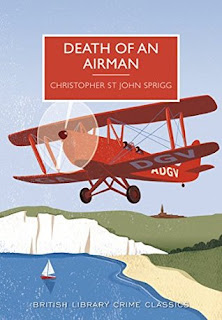 The bishop of Cootamundra in Australia, Dr. Marriot, is in England on leave and has decided to learn to fly, thus enabling him to get around his huge diocese more easily, back in his home country. He witnesses a crash at the airfield where his lessons are to take place, one, George Furnace, an experienced pilot, is killed on impact. But was he? Study of the dead body proves this was not the case, he was killed by other means. The problem is, it seems almost impossible for this to have happened. Two police detectives, Creighton and Bray, aided by the bishop, have their work cut out to discover, not only how the murder was done, but also exactly why someone wanted the pilot dead.

This is another of the splendid British Library Crime Classics, this one originally published in 1934. It's quite a complicated little story, lots of twists and turns with an unexpected back story for the age. At least I thought so. I won't say what but it's a problem I definitely associate more with our modern age. There's also a lot about planes and flying, a fair bit of which went right over my head but never mind. It wasn't necessary to understand it all in order to enjoy this very good crime yarn. I liked the fact that among the pilots there were a couple of competent females as well as males so that this did not just feel like a Boy's Own Adventure. Not bad at all. And I like the introductions that author, Martin Edwards, does for these BLCC reissues, although I have to say I read them when I've finished the book in case of spoilers.

I saw SLADE HOUSE at the library recently and wondered about it. Almost checked it out. I can see that I'll need to go back and find it again. It's a very small book in size, at least our US copy is. Like the idea though.

Holy cow sis! you are "power reading"!! It's only March and you are thinking of RIP?!! lol pahleeze! time goes by way too fast!!!!! lol.. sure glad you are enjoying your books! I've begun another "reality" book so it won't be fast reading again but the beginning of this book sure is interesting! It's called Empty Mansions and it's a true story. I am still having trouble concentrating just want to sit and close my eyes though I never nap. well... one day at a time. Keep reading good books!! xoxoxo

I'm glad you enjoyed Slade House too! It's the second book by Mitchell that I've read, my first was Cloud Atlas which is very long (over-long!) and also reads like a collection of different stories. It's certainly more challenging than Slade House!

You're moving on well with Bev's Scavenger Hunt Challenge! I haven't come across Christopher St. John Sprigg before, although I know about the British Library Crime Classics. Death of an Airman does sound interesting, apart from the detail about planes and flying - it would go right over my head too :) - ha, ha!

I think my husband has Slade House. It sounds like his kind of story. Death of an Airman sounds very good and I love the cover. I have a thing for bi-planes even though I would never go up in one.

I have never even heard of Slade House before, but it sounds good!

I look forward to Death of an Airman. Don't these books have the best covers?! (And I love how St. John is pronounced Sinjin)

Kay: Yes, it's quite a slim volume and quite a quick read. Worth checking out.

Pat: I've been lucky and found good books to read so far this year. When they're good it's no hardship to keep on reading. LOL

Margaret: I thought DM's books were generally a lot more challenging than this one. At some stage I want to try one or two.

I'm finding Bev's scavenger hunt challenge to be really fun and enjoyable. I think I may have chosen well with my challenges this year.

Tracey: I too love the cover of Death of an Airman. In fact all of the covers of these BLC books are delightful.

Kelly: I think Slade House is a newish book which may be why you haven't heard of it.

Nan: Indeed they do have such wonderful covers... mostly old railway posters I think, but not all.