The Signature of All Things

My Goodreads bookshelf tells me that I first saw The Signature of All Things by Elizabeth Gilbert on that site in October of 2013. I added it as a 'Want to read' and here I am in 2017 finally getting around to it. Good job no one was holding their breath. 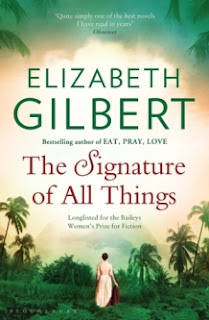 Alma Whittaker was born to her parents, Henry and Beatrix, in Philadelphia in the year 1800. Henry was a self made man from London, who made a large fortune collecting plants around the world, Beatrix an educated, no nonsense Dutch woman from a family of botanists in Amsterdam. Alma's was a strange upbringing, she was bright and encouraged to be self-educated by using the huge library in the house. There wasn't a lot of love around although she adored her father, but her mother was quite distance and strict. Alma had no friends of her own age whatsoever. The girl took refuge in a love of plants and of learning.

At the age of nine, Alma's life changed when her parents adopted Prudence, the daughter of one of the estate workers. Where Alma was considered a very plain child by her parents, Prudence was beautiful beyond measure. Thrown together, the two girls did not fight or even argue but they were so different, Alma open and spontaneous, Prudence very reserved, that they could find no point of reference and were never close.

It was a strange and unconventional household to grow up in. The girls were never treated as children and encouraged to take part in dinner time discussions with important and educated visitors. Education was everything. Alma revels in this and grows intellectually year by year. In their teenage years the girls gain a friend, Retta, who lives nearby and is everything they are not... a normal girl of the time, interested in clothes and gossip. Alma falls in love with a publisher friend of her father's but nothing works out as it's supposed to and eventually, she finds herself living alone with her father. Luckily, Alma still has her interest in botany and decides on a specialist field of interest within that subject. Then the publisher friend of her father brings her some wonderful paintings he's been sent by a botanist of rare talent. After that, life for Alma is never the same again.

Opinions on The Signature of All Things seems to be split right down the middle... going by Goodreads anyway. People seem to either love it or hate it... the haters finding it rambling and boring. Admittedly, it is almost 600 pages and it does ramble a bit. Normally I'm not a huge fan of that but just occasionally I find it works for me and this is one of those times.

For me, the book reads a bit like a biography of a fascinating person, albeit a fictional one. The author has created a main character in Alma who is flawed just like all of us, but like all of us she's just trying to do her best. No one told you anything about anything in those days and girls especially were kept ignorant and thus were permanently confused. She might have been born into a rich family but things are not easy for her, especially emotionally. She suffers from being tall and well built and not traditionally pretty. Luckily, she has a good brain and the opportunity to use it.

For the first two thirds of the book, Alma's existence is mostly confined to the mansion in Philadelphia. This might seem like a very restricted story and in some ways it is, but for me it only intensified the tale somehow. Alma is such a fascinating person and the people around her so interesting that I was never bored. Her studies, her books, her discoveries, all are delightful to read about.

When the action moves to Tahiti after Alma's father dies it almost becomes a different book. She's there on a quest and has a huge adjustment to make; in a tiny village in Tahiti your wealth is pretty much irrelevant. And anyway all her belongings are stolen the minute she arrives so she's suddenly learning how to look after herself for the first time in her life. I massively enjoyed this section of the book.

The scope of this novel is wide ranging. The Theory of Evolution looms large as Alma approaches her sixties and there's much discussion of how this affects mainstream religious beliefs. This is not a religious book but religion was such a large part of people's lives in the 19th. century that it's an integral part of the story and rightly so. Sexuality is unflinchingly dealt with too so if this is not your bag be warned... there is some explicitness.

For me this is a difficult book to do justice to. All I can really say is how much I loved and enjoyed it and mourned when it ended. Like I said, it really is not everyone's cup of tea, but I had a feeling it was the kind of thing I might enjoy when I was in the right mood, and so it turned out to be. I'm so glad I gave it the time and effort it deserved.

Well, sis, at 600 pages I am awfully glad you enjoyed it! lol I have had a book here and there that I wasn't 100 percent sure I would like. It turned out different from what I usually read and I find that I enjoyed it!..we just never know. But glad you enjoyed this one!!

Great review, Cath - I was going to say I was adding this to my TBR lists. But when I checked Amazon to my surprise I see I bought the ebook in Sept 2015. My Kindle is most definitely a black hole - books go in and then are lost, unless a review like yours rouses my interest again! :)

Pat: Yep... I'm glad I enjoy something that was 600 pages long too. LOL! This one was a bit different to my usual fare but it's bad thing to try something different sometimes. I don'y do it often enough.

Margaret: That's so typical of what happens to me. My Kindle is a huge black hole. I bought a more up to date one recently and when I logged it into my Amazon library and the books came up I found I had 47 pages of books on the new Kindle. They were all in folders on my ancient one so I didn't really know how many were on there. Honestly...

I'm another one with a Kindle of seemingly never ending memory and space proportions. I guess that one day it is going to call time on me.

I already have this book on my Goodreads 'Want To Read' list, although I have to admit that I didn't realise just how many pages it had and I very rarely read chunksters of this size.

I do still aim to read it (eventually), as I have spoken to you before about how much Alma reminds me of the Kew Gardens artist Marianne North. Tahiti was one of the places she visited in order to paint and draw the flora and fauna of the country, although to be fair, she did travel to most of the remote corners of the World, the size of her permanently housed art exhibition, bearing testament to her committment and tenacity.

I'm not so sure that I would enjoy the religious aspects of the storyline, especially if they do tend to be rather laboured and I don't tend to enjoy erotica too much either. However, as you say, this is one that the reading community is split right down the middle on and I am sorry that you cast yourself into the lower end of the enjoyment spectrum. 600+ pages is a big committment not to be certain of a fulsome reading experience.

Thanks for sharing your thoughts and I hope that your next book is more to your liking :)

Hi Yvonne. You too... it seems a lot of us have a Kindle of the black hole variety.

Marianne North lived an extraordinary life didn't she, in a time when women just didn't. I must try to find a biography of her if one exists.

I did actually really love the book. I gave it five stars on Goodreads. I think I was just pointing out that some might not like the religious or sexual aspects of the story. I'm not a religious person but the religious aspects didn't bother me as they weren't too much in your face, just there in the background. People who don't like sexual explicitness might be put off a bit. There's not 'heaps' of it but it's there. I'm pretty sure this could be one of my favourite books this year, I did so like Alma and her enquiring mind and the huge scope of the book.

Interesting review Cath of a book I have never heard of Thanks!
You have piqued my interest I think I may see if the Library has a copy and test the water.

Val: Do see if your library has this one, I don't know why but I have a feeling you might like it.