So, it's catch up time, two brief (well I'll try) reviews to do before I go to Cornwall in a few days.

First up, The Essex Serpent by Sarah Perry.

There's something in the air in the coastal regions around the village of Aldwinter, in Essex, something not quite right. Local villagers are starting to say that the Essex Serpent has returned, a dragon-like water creature that kills the unwary in the marshes. Cora Seaborne, newly widowed, takes rooms in Colchester with her companion, Martha, and is fascinated by the talk, thinking it might be an undiscovered species remaining from the dinosaur era. Natural history is Cora's passion and release from a deeply unhappy marriage has given her the freedom to, more or less, do as she pleases. She gets an introduction to the Aldwinter vicar, William Ransome, married with several children and also an amateur naturalist. Cora is not religious or superstitious, Will obviously is religious but like Cora doesn't believe in mythical monsters. The two get on like a house on fire but are not fully prepared for the consequences of their investigations and the effects on the people around them.

I started reading this book about 18 months ago. I knew it was a slow burner and about 70 pages in it was doing nothing for me so I put it to one side 'for another time'. The other time arrived a couple of weeks ago and I tried again. What a difference and it only goes to show how your mood can affect how you enjoy a book. Yes, it is very much a slow burner but this time I enjoyed all the explorations, off tangent, delving into the medical world of the late Victorian era, the frustrations of women with brains who weren't expected to want to do anything with them, life as a vicar at that time and so on. Fascinating stuff. To be honest it's very much 'not' an action story. Not a great deal happens but the author has made the mundanity of ordinary people's lives interesting. I felt for Cora, not only a very nasty marriage but a strange son to cope with, clever but unable to do what men do when they're clever. The things that happened around her, romantically speaking, not of her making or encouragement, but she got the blame anyway. This book divides people and I can see why. It is slow going at times, and it's true not a lot happens, but I really enjoyed it and look forward to reading more by Sarah Perry... she has a new book out in October I think, Melmoth, another weird one by the sound of it. Good-oh.


Lastly, Something Sensational to Read in the Train by Gyles Brandreth. 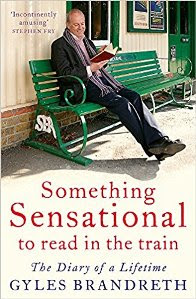 The author, Gyles Brandreth, is a household name in the UK. He's been on TV for many years, Breakfast News, Countdown, Have I Got News For You?, and these days on The One Show quite a lot. He's kept a diary since he was eleven years old and starting at his first boarding school, Betteshanger in Kent. For people who were state school educated there's always a fascination with what went on in private schools, probably why some of Enid Blyton's books were so popular. The sections on Betteshanger and later, Bedales, didn't disappoint and reminded me of Stephen Fry's private school experiences (can't remember which one he went to though) in Moab is my Washpot. But Brandreth didn't hate boarding school as much as Fry, in fact he fitted in rather well, due partly I suspect to Bedales being progressive and co ed. At Oxford he got very involved in acting and producing plays and this led to a career doing similar things. I was unaware though that he had so many other strings to his bow, he's a creator of word games and books on them, started the Scrabble World Championships, is vice-president of the NPFA and knew The Duke of Edinburgh quite well (he was president), an after-dinner speaker, journalist and so on. Brandreth is also a very prolific author and is probably best known for his historical crime series about Oscar Wilde. The list of people he's met, worked with, and interviewed is extremely long and impressive. I loved all the annecdotes, the insights into a lot of famous people, some of it rather surprising, and hearing about his close friendships, family... his wife sounds like a real gem. In the 1990's he became the Conservative MP for Chester but lost his seat in 1997 during Tony Blair's Labour landslide election. The political sections of these diaries read like Yes Minister or House of Cards and reveal a lot about our parliamentary system. Some of it is very eye-rolling although having read autobiographies by Ed Balls and Ann Widdecombe none of it came as much of a surprise. All in all this was an excellent book, quite long at almost 700 pages but well worth reading - Brandreth's style is conversational and easy to read, you feel as though you're sitting with him having a cup of tea and a chat. You can't ask more than that.

hmmm, it seems you are getting away from murder/ detective books for a bit! You have always had a really wide variety, which is super!! ( going back to Cornwall to see if Poldark is filming eh? lol)

A little different books from what you usually share, but I was very intrigued by both of these. And thanks for putting them on my radar, Cath! Have a good time in Cornwall!

The Essex Serpent sounds very interesting and I love the cover. I will have to add it to my list to look for.

Pat: Didn't you read some of Gyles Brandreth's Oscar Wilde books? I could have imagined that... lol!

Kay: Yes, I suppose a little different to my usual crime fare though I'm back on those now. Can't stay away for long.

Thank you, I will.

Tracy: I'm not sure but I think cover won awards or was nominated. It *is* lovely.

I did almost the same as you with The Essex Serpent. I borrowed it from the library and just couldn't find any interest in it after a couple of chapters, so took it back unfinished. I can see that I'll have to try it again - I agree that mood is an important factor when I'm reading and what I've just read can also affect how I react to a book.

Gyles Brandreth's book sounds fascinating, but I'm not sure I can manage a 700 page book for a while.

Hope you have a good time in Cornwall (maybe you're there now?)

Yes, I am here in Cornwall now. It's a lovely spring day with a chilly breeze. And I've already liberated one jigsaw from a charity shop...

Might be worth trying again with The Essex Serpent but you may still not care for it... lot of people don't I notice.

Yes, I reserved GB's book without checking how long it was. Was a bit horrified when I saw a doorstop sitting on the reserve shelf. LOL

Have a great time in Cornwall. I'm very fond of Polperro and Fowey!