As Chimney Sweepers Come to Dust


As Chimney Sweepers Come to Dust by Alan Bradley is my second book for The 12th. Annual Canadian Book challenge which is being hosted by The Indextrious Reader. 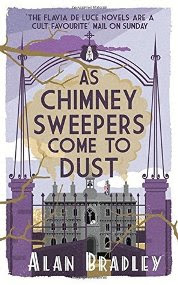 Twelve year old Flavia de Luce has lived at Buckshaw in the small English village of Bishop's Lacey all her life, solving a clutch of murders, scientifically, in the last year or two. But now she's been sent off to school in Toronto, Canada. 'Banished' in her opinion, to the school where her late mother was educated. Strange as her family are, bullying sisters, remote father, Flavia misses them and her home desperately.

And what an odd place she seems to have come to. Miss Bodycote's Female Academy has an intimidating headmistress, one minute severe, the next almost caring. The teachers too are an odd lot, the only one Flavia feels close to was accused of murdering her husband. The pupils seem to accept her but hold her somewhat in awe because of who her mother was.

When a mummified body falls down the chimney into her room one night, Flavia is much cheered. Something to get her teeth into to help her with homesickness. And there is a lot to discover... several girls have disappeared over the last couple of years, people know things but will not reveal what they know for fear of something awful happening to them. 'Trust no one' Flavia is repeatedly told, the inference being that if she interferes too much she too will 'disappear'...

For some reason I didn't connect with this instalment of Flavia's adventures as much as the previous six books. I think in moving her away from her natural habitat of Buckshaw and the village the impact was lessened and quite a lot of the charm is lost. I couldn't quite believe in the school and its inhabitants, they didn't feel real, I couldn't get a proper feel for who any of them were. And there was hardly any sense of Toronto or Canada, it could have been anywhere, which I thought was very odd as the author lives there. A bit of a shame really as I love Flavia and her mania for chemistry and logic and her use of her talents to solve murders. I wanted more answers to some of the questions posed... perhaps those will be supplied with the next book, Thrice the Brinded Cat Hath Mew'd, which, thank goodness, has Flavia returning home to Buckshaw and Bishop's Lacey.

I felt the same way about this book, Cath. Such a good series though. I guess she has to grow up eventually😩

Peggy: It is a good series, I've loved all the rest of the books. Every author has one or two in each series that's not quite up to scratch.

I'm surprised that this one fell short of your expectations, as it has received some pretty good ratings and reviews at Goodreads, and is not only written by a Canadian author, but is set in Canada as well and I know how you like your books to be well travelled.

I really want to take the plunge into this series, but as you are now up to book #7, I am a bit dubious about ever being able to catch up with such a well established cast of characters.

I hope that the next book you select for your challenge, is a little more to your liking.

I hope that all is well with you and that you had a good Christmas. Wishing you a Happy and Healthy 2019 :)

Yvonne: Yes, I saw that it had good ratings but we don't all like the same things and it didn't completely work for me sadly.

Yes thanks, I had an excellent Christmas but busy with family, the last of whom only left today. So it's a quiet new year for us. Happy New Year to you too.