Aoife's Chariot by Katherine Pathak is my 6th. book for Bev's Mount TBR 2019 and also qualifies for her Calendar of Crime challenge under the April category of 'Book title has word starting with A'. 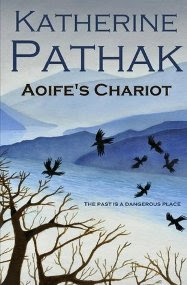 Imogen Croft is a Scot who lives with her husband, Hugh, and children on the Essex coast in England. She had rather an idyllic childhood on the Scottish island of Garansay, situated in the Firth of Clyde, brought up with two older brothers, Michael and Allan. All three of the siblings have moved away but still maintain contact. When their mother, Isabel, dies suddenly the brothers suggest that Imogen goes north to look at the old farm and decide what should be done with it. Should it be sold, or should they keep it?

Some years ago Isabel had lost a bag when walking on the nearby mountain. Whatever had been in the bag was so important that it has caused a major upset in the family. It was never found... until now. Some builders find it and hand it to Imogen, but it's empty. Who took the contents?

At a fete, Imogen has a confrontational run-in with one of her brothers' old acquaintances, Alison. The woman is clearly drunk and has a reputation for this kind of behaviour. No one thinks any more about it until her body is discovered floating in a loch up on the mountain. Investigations reveal, shockingly, that the manner of Alison's death is identical to that of an aunt... her father's sister. How can this possibly be?

This one of those delicious 'family secret' type stories and, mixed with mysterious deaths and a fair bit of family history, it works tremendously well. Imogen slowly realises there are secrets in her family that she had no idea existed. Who was the mysterious Aileen who died young and who nobody talked much about? Why did her father distance himself from the family he was brought up with in the slums of Glasgow, to the point where Imogen hardly knew any of them? And what was in the bag her mother lost that was such a devastating loss? Imogen's quest to find an answer to these questions and more takes the reader on a fascinating journey.

One of the nice things about this story, for me, was its depiction of a happily married couple as the main characters. This is quite unusual, authors seem reluctant to allow any of their detectives a normal life. There are few who are not alcoholic, or in possession of three ex-wives and a clutch of hostile, estranged kids, sometimes all of the above... or indeed other sundry skeletons in residence in the cupboard rattling the lock to come out. So nice to have an ordinary couple, with ordinary kids and ordinary problems living a normal life. All power to Katherine Pathak's elbow say I, it's so refreshing.

I gather that the island of Garansay is probably the Isle of Arran. I've never been but after reading this book I would now love to. It's a character in its own right, so vividly does the author bring it to life. I loved descriptions of childhood haunts and grieved a bit with Imogen as she mourns the loss of the peace and quiet now that tourists have discovered their island. One section towards the end where there's a violent storm was so effective I felt I was actually there. Superb.

Aoife's Chariot is book 1 of a series, the 'Imogen and Hugh Croft' mysteries, of which there are currently 6 books and a short story. I'm so looking forward to reading more and have already bought book 2, The Only Survivor, for my Kindle.

Peggy at Peggy's Porch has also reviewed this book here.

Love books where the setting becomes a character in its own right! Thanks for the mention ♥️

Peggy: The setting really was very vivid. I've bought book 2 and am looking forward to reading it.

This sounds good. I haven't heard of Katherine Pathak before. I hope the library has any of her books as I'd like to try one.

Completely agree with your last paragraphs. Our tastes do change at different stages in our lives.

Margaret: Annoyingly, my library catalogue has no books by Katherine Pathak at all so I'll probably buy them gradually for my Kindle.

Nicola: I'm not good at change to be honest but some of them just happen naturally and are not thrust upon us, and those I'm OK with.