Pardonable Lies by Jacqueline Winspear is my 14th. Book for Bev's Calendar of Crime challenge, covering the September category of 'Primary action takes place in this month'. 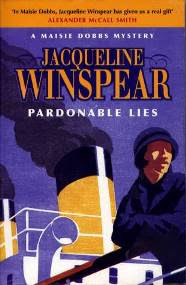 Maisie Dobbs is engaged by Sir Cecil Lawton to prove that his son, Ralph, really did die in the Great War. His wife died recently believing the young man was still alive despite the fact that the plane he was flying crash landed and burst into flames. On her deathbed she made her husband promise to find out the truth of the matter, even though he is sure his son died in the aircraft.

At the same time Maisie is trying help a young girl DI Stratton has arrested for murdering her uncle. The girl is hiding something and is thus uncommunicative: Stratton thinks Maisie might be able to get through to her.

All this means she is busy so Maisie is not exactly thrilled when her close friend from university, Priscilla, asks her to find out how her brother, Peter, died during the war. Priscilla, now married and living in France, lost three beloved brothers in the conflict, plus, like Maisie, is still traumatised after what the two of them went through as nurses on the western front. Maisie knows that this and the Lawton case will take her back to France, a place she desperately does not want to go, the memories being just too awful.

It soon emerges that someone else does not want her to go either. Unexplained 'accidents' and some poisoned chocolates indicate that Maisie is about to uncover secrets that someone would really rather she didn't.

Hard to put into words what a brilliant book this is. Book three in the Maisie Dobbs series is rather heart-breaking and painful to read in places, dealing as it does with the fall-out from World War One, still ongoing even after twelve years. People who lived through it and came out the other side were utterly traumatised and it never stopped, it might go away for a bit but then return with a vengeance, as Maisie discovers when she's forced to return to France and the site of the field-hospital where she served. There's only a brief description of what was happening there towards the end of the war but goodness me it's gut-wrenching.

There is, in fact, a lot going on in this book. Don't expect a traditional murder mystery because you won't find it here. Instead there are many topics explored, legal representation for the poor, the plight of gay men in the early 20th. century, the role of psychic mediums after the war, the intelligence secrets and missions of World War 1 and so on. Female police constables were just starting to be seen, so that was interesting. Maisie is rather 'ahead of the times' and can intuitively see things others cannot, in more ways than one, which fascinated me a bit. I can't wait to see what kind of journey this series takes me on. I'm becoming rather addicted I think and I can't believe I didn't find them interesting 10 years ago. I'm coming around to the idea that for everyone there's a time to read certain books and this is my time for Maisie Dobbs.

How curious! A friend loaned me one of the latest of this series a couple of weeks ago and, having looked at it I decided to get the first in the series to read first. It arrived yesterday, I shall look forward to reading it even more after your review and hopefully go on to the rest of the series.

So many of you have featured books from the Maisie Dobbs series, that I just have to know what I am missing out on, so book #1 is heading for my wish list right now!

I have read a few mysteries just lately which have been slightly on the 'cozy' side, however they have been written by US authors and as such, are couched in narrative which clearly marks them as 'American'.

This in no way means that I haven't enjoyed them and I know that author Jacqueline Winspear has lived in the US for many years now, however there is definitely something instantly recognizable about the style of writing and the characterizations, which makes this a stand out British series.

I shall probably never catch you up on your Maisie Dobbs journey, so I shall keep tuning in to your reviews with great interest.

Thanks for sharing and enjoy the weekend, despite the despicable weather :)

I enjoyed this one too - amazed to see that I read it 10 years ago when I checked back on my blog!! The introduction of women police fascinated me too and I see from my post on the book that in 1914 Margaret Damer Dawson, an anti-white slavery campaigner, and Nina Boyle, a militant suffragette journalist founded the Women Police Service and by 1923 – 30, women police were fully attested and given limited powers of arrest.

I did want to read more of the books, but I've only read three of them - that's one of the problems of blogging, as I keep finding so many books I want to read!! I think you're right that there's a time to read certain books - so obviously the right time for me to read the rest of her books hasn't arrived yet ...

Glenys: I hope you enjoy the first book, the second and third books are even better in my opinion. They're history books with a mystery thrown in to my mind, lot of background stuff which I find very interesting.

Yvonne: Oh yes, British and American crime writing differs quite a lot but the good stuff is good whether it be one or the other and I enjoy both. Not so keen on the cosy mystery genre though, one or two occasionally is enough with those.

Hope you're enjoying your weekend, we're off to Swansea tomorrow so a busy week ahead for us.

Margaret: Yes, I first read book one, Maisie Dobbs, 10 years ago too. Time flies. I didn't realise it was as early as 1914 when the women's police service was founded. I would have put it at the late twenties.

I'm sure your time for reading on with MD will come... or not... sometimes it happens that you read a few and that's enough, and that's OK too.