Catching up on reviews with a couple of crime titles today. First up, The Pale Horse by Agatha Christie. 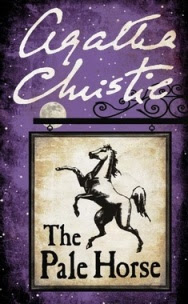 Father Gorman is called in to minister the last rites to a dying woman: she has something she wants to tell him before she dies. On the way home he stops at a coffee shop for a drink and writes a list of people's names down on a piece of paper. Before he can reach home he will be dead. Several people on this list are already dead, supposedly of natural causes. The godson of one of them, Mark Easterbrook, becomes suspicious and starts to investigate with the occasional help of author, Ariadne Oliver. Investigations lead to a village with an old pub by the name of The Pale Horse, although it's no longer a pub but is lived in by three single women. Village gossip has them down as witches but surely this is nonsense? When people start to die almost by remote control, Easterbrook takes matters into his own hands, putting himself and, more importantly, his girlfriend, into extreme danger. Fantastic Fiction lists this as an Ariadne Oliver book but to be honest she's not really in it a lot. It's really a standalone and as such I found it works very well and I enjoyed it a lot. It has a nice supernatural bent, a bit of romance which doesn't interfere with the plot, and I had no idea who the culprit was or how it was done. It also has an excellent sense of both London and the gossipy, insular atmosphere of an English village in the early 1960s. I had no idea until Jo at The Book Jotter left a comment on my last post that the BBC has dramatised it for showing over the Christmas. To be honest I haven't liked their recent adaptations but will give this a go and hope they haven't modernised the life out of it.


Lastly, The Cornish Coast Murder by John Bude. This is my 28th. book for Bev's Calendar of Crime challenge covering the March category of 'Primary action takes place in this month'. It's also my 23rd. books for Bev's Mount TBR 2019. 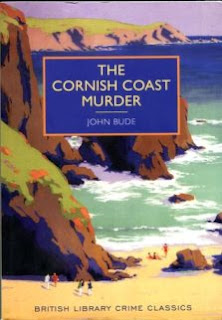 Reverand Dodd is the vicar of the village of Boscawen on the north coast of Cornwall. He likes the quiet life and enjoys good food and evenings by the fire reading detective novels. When a local magistrate, Julius Tregarthen, is found dead in his home, shot through the head, Dodd is horrified but also intrigued and can't stop himself helping the police in the investigation. Luckily, Inspector Bigswell of the local force does not mind, in fact welcomes the help as the case is very complicated. The dead man's neice, Ruth, who lived with him, has been seeing a local author and Tregarthen had objections to the relationship. Did the author kill him? Dodd thinks not but all the evidence points that way so Bigswell is obliged to follow that line of enquiry. Which of them is right?

This was quite a good yarn. I loved the setting. The dead man's home is described as being on a 'ness' (a cape or headland) and practically surrounded by the Atlantic, a fantasic setting for a crime story like this and I absolutely loved it. I'm sure this is possibly because I know that region very well and am biased but even so, it was beautifully done. And the whys and the wherefores of how the murder was committed were equally complicated and interesting, 'different'. My only grouse is with the revelation of who did it. My reaction was, 'Eh?' And that's all I'm going to say apart from: 'lovely cover'.

There surely is something to books that take place in area's you know! You feel like you are there! So glad you are getting some really good ones to read.

I am not surprised that the Cornwell book "hit home" for you! I love when I know the area the book is written in! So glad you are getting so many books that you like!

I haven't read Agatha Christie in years but I started a movie the other night on Netflix called "Agatha and the Truth of Murder," a movie that theorizes on what she may have been up to when she disappeared for a few days all those years ago. I had a hard time getting into it, probably because I had too much on my mind to concentrate on it, but I plan to give it another chance this weekend. The acting was OK, but the story seem kind of farfetched to me.

I had no idea that a 'ness' was a cape or headland - that would have made a brilliant word for a 'Wondrous Words Wednesday' post!

I do agree with you, that when a book is set in an area that I know, or an author lives locally to me, I do tend to engage more with a book and story - or at least I try to!

Both of your choices this time would fit that criteria, as I know Cornwall quite well and love the area, although the John Bude collection of stories are still buried within the depths of my TBR mountain!

I thought I had read just about every Agatha Christie book , however 'The Pale Horse' is a new one on me and I shall be looking out for a copy on my travels. The television adaptation was filmed in both Bristol (somewhere I am not quite so familiar with, and I have to admit, I tend to avoid at all costs) and The Cotswolds, which I know all too well and will be able visualise from the narrative and action. It also has quite a stellar cast, so I shall look forward to the 'air' date being released.

Pat: I love finding books that are set in my area. There are plenty that're set in Cornwall of course but not all are to my taste, although it probably wouldn't harm me to try something different occasionally. I seem very set on crime stories these days and they are very much my 'go to' genre.

Sam: I saw Agatha and the Truth of Murder a couple of years ago. I enjoyed it but you need to suspend disbelief rather. I watched it more as an enjoyable crime yarn rather than anything really to do with Agatha Christie, otherwise as you said, it was too farfetched.

Hi Yvonne. No I didn't know that about the word 'ness' either. Is that why 'Caithness' is so called I wonder? It would be a very large version of a ness but it is one nevertheless, surrounded as it is on two sides by water.

It really does add to the enjoyment of a book when you can picture the setting and scenery. Of course, the mark of a good author is when you've never been to an area but because the author is so skilled he or she makes you want to go when you've finished the book.

The Pale Horse was new to me too, although when I got close to the end one aspect seemed familiar. So I checked and yes indeed, in 2010 ITV had made it into a Miss Marple drama (even though she's not in the book) starring Julia McKenzie. I look forward to seeing what the BBC do with it at Christmas.

Good reviews, Cath. I'm not keen on recent BBC adaptions of Christie either. I didn't buy John Malkovitch as Poirot, but lovely Tara Fitzgerald rescued it.

Hi Cath, I ordered the Cornish Coast Murder and it is waiting for me at the post office as I speak. I'm looking forward. I adore Cornwall, and love atmospheric settings, and here I go!

The Cornish Coast Murder was one of the books my husband got at the book sale this year. Glad to hear you liked it mostly. I am hoping to read it or The Lake District Murder soon. Both were published in the same year.

Right now I have a headache from a fire nearby (smoke in the air) and having a hard time distracting myself from that. I have read several Christmas mysteries lately and would like to read a couple more, but if I read too many I won't have time to review them in December.

Nicola: I think a lot of people are not too keen on the recent AC adaptations so I do hope The Pale Horse will be better.

Judith: Brilliant. I do hope you enjoy The Cornish Coast Murder as much as I did. If nothing else the setting is spot on.

Tracy: That was a good find at the book sale! I visited a cousin that I don't see very often a few weeks ago and lo and behold she reads the BLC crime books and gifted me 3 that she'd finished with. Thrilled!

Finding time to review books in December can be tricky. I always think I'll have more time than I actually do.

Oh goodness, I hope you're not close to the current wildfires in California?