Looking at the number of books I've read this month, four, it would appear that I haven't been reading very much. Not true. One, unfinished, behemoth of a book has taken up much of my reading time and the books listed below were slotted in around, read as light relief.

This was an enjoyable collection of worldwide voyages covering oceans, seas and rivers. I enjoyed hearing about the launch of the Queen Mary in the 1930s and how she ran aground. Martha Gellhorn's D Day experiences stowing away in one of the hospital ships was rivetting and I plan to look into that and her a bit more. For me, the most interesting section was 'The Americas', specifically river trips on the Mississippi and Missouri. I definitely want to read more in that vein. If I have a minor complaint it's that there were a few too many cruise liner trips included. Some people the book made me want to read more about: Henry Stanley (of Stanley and Livingstone fame), Arthur Ransome, Martha Gellhorn, Robert Louis Stevenson (I own a book of his letters), Hammond Innes (I used to love his books), Thor Heyerdahl and Tim Butcher. To be honest that's the joy of this kind of book, they lead to many more interesting books and people. I believe there's another book in the same vein about railway journeys so I will be reserving that from the library at some point.

Edward Powell lives in deepest Wales with his aunt, and loathes both of them. He's a complete snob about everything, food, cars, music, you name it... nothing is ever good enough for him. Mildred, his aunt, adores Wales and the village they live in, Llwll... what she struggles with is her nephew, Edward. The two of them are at permanent loggerheads, constantly bickering, point scoring and embarrassing each other in public. Edward eventually comes to a decision: he must murder his aunt. The question is, how? Well this was something of a different whodunnit as it charts Edward's attempts to do away with the dreadful aunt. The trouble is, he's every bit as dreadful as she is and although I enjoyed the humour and the quirkiness of the book I did find the constant carping wearing and could not empathise with either of the main characters. Of course, once the point of view changes, about two thirds into the book, you get a different perspective and all is not as it seems. Rural Wales put on a good show in this and was easy to picture as I've been around a lot of it... I felt as though the author got Welsh country folk spot on. And yet again another lovely cover.

Three quarters finished with both. Moby-Dick is the aforementioned behemoth and the Richard Briers is my bedtime read and as such is perfect.

Planning to read these two this month.

The Year of Living Danishly by Helen Russell will be my 10th. and possibly last book for the European Reading Challenge until I start again in the new year. And In the Garden of the Beasts by Erik Larson will be my final book for the World at War challenge.

And finally I'll be dipping into these three lovelies as and when I have time closer to Christmas. 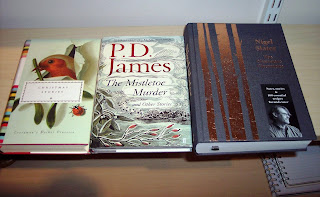 From the left, The Everyman Book of Christmas stories, The Mistletoe Murder and other stories by P.D. James, and The Christmas Chronicles by Nigel Slater.

Hi Cath,
I may have never mentioned this, but I collect Christmas books and collections. I have that Everyman's Classic book of stories, and oddly enough, plopped it on my bed early this morning as something to read before bed tonight. I also have The Mistletoe Murder by P.D. James, and I think may have mentioned I should read it again as I can't recall the details. But I'm still searching for a great Christmas novel this year. All I've found is drivel so far.

You have some great titles in your collection this month, a couple of which we have already discussed.

'The Murder Of My Aunt' is completely new to me though, as is its author, so that just goes to show how few of the 'classic' titles I have managed to knock off my list!

This is the first time I have heard the term 'inverted crime' novel, but looking at that excellent art work, I am reminded of a series I became involved in, which were classed as 'mystery capers.'

I may have to read the book for myself, just to find out!

Wow Sis! I've only read 40 books so far! One I will finish tomorrow in time for it to be 4 books in November. Sheesh.. you seriously are a speed reader!! ..but I love you just the same! lol

I think I enjoyed The Murder of My Aunt more than you. I thought it was quirky and entertaining - and yes Edward was awful!

How are you getting on with Moby Dick - I'm not sure I want to read such a long book especially not at this time of year. I'm already in pre-Christmas stress mode.
I am reading a collection of Christmas Stories - the Christmas Card Crime and other stories but it's not festive. I need something more inspiring I think ...

Judith: How funny that you too have that Everyman Christmas book. I like the fact that it has a lot of classic authors in it and I'm looking forward to trying a few that I've not read before. So sorry that all you've managed to find Christmas-wise this year is drivel. I can't say that I've found very much in the past to recommend either. Shame.

Yvonne: I haven't heard the term 'inverted crime novel' either but it suits the book. Neither did I know the author, so you're not alone. So many of these crime writers from the 20s, 30s and 40s have been forgotten, some of them very good and it's a shame. I think the BLCC have done a wonderful job of reviving interest in them.

Pat: Considering all your health problems I think it's miracle that you've managed to read 40 books. Well done!

Margaret: I think I'm in the minority as regards The Murder of My Aunt as I have another friend who also loved it. I didn't dislike it at all but was just slightly irritated at times.

Moby-Dick is going well. It's not so much it's length that's the challenge, it's the denseness of the writing. It's a very wordy book and, in my very humble opinion, not all of them are strictly necessary. Sometimes I read a passage, have no clue what he was talking about and have to return to the beginning and read that bit again. And sometimes I still don't know what he was saying. LOL!

I think there seems to be general problem with finding Christmas books that're inspiring. Judith, whose comment is above, is also not finding it easy. You'd think, seeing how 'big' a thing Christmas is, it would easy to find loads of good books set in that season. Not so it seems.

I'm impressed you're taking on MOBY DICK. All I've ever heard about it is that it's super boring. Better you than me, I say!

Susan: I have no idea what possessed me to try Moby-Dick but once I started I was determined to finish. Not quite there yet. It is boring in parts, but interesting in others. A real mixed bag but on the whole I'm glad I tried it.

Well done, Cath. Another good month in the bag and on to the next one.

"Moby Dick" is kind of like a bad penny, isn't it? It just seems to hang around a whole lot longer than you think it would when you first pick it up. :-)

Sam: Yes, not too bad considering.

LOL... well quite. *But* I have less than 100 pages left! Then I have to write something about it. Which might be more difficult than reading the thing.