Nice to be home again after a flying visit to Cornwall. The county was looking good in its autumn colours but everywhere in the UK is wild and woolly at the moment, high winds, lot of rain, floods in the north, awful to see rivers in flood on the news and people's homes ruined.

Anyway, books. As a bit of light relief from this:

A random grab from the library, the large print section in fact. Not somewhere I make a make beeline for as a matter of course but just occasionally it occurs to me to take a gander at what's over there. When I got home with The Pale Horse by Agatha Christie I looked at it on Goodreads because I'd never heard of it before and lo and behold three or four of my friends on there really liked it. And so do I. I'm about one third in and already it's full of mystery, a dead woman, followed by a dead priest who came to minister the last rites to her. A list of people found hidden on the priest, three of whom recently died, apparently of natural causes. Three women living together in a village who have the reputation of being witches. What's the connection?

And here's the thing... I've always fancied living in an old vicarage. Well who hasn't? By all accounts they were actually cold and draughty and very uncomfortable, but still the idea has always appealed and I think Agatha Christie knew the appeal was shared by a lot of people. So she comes up with this:

The Vicarage sitting room was big and shabby. It was much shaded by a gargantuan Victorian shrubbery that no one seemed to have the energy to curb. But the dimness was not gloomy for some peculiar reason. It was, on the contrary, restful. All the large shabby chairs bore the impress of resting bodies in them over the years. A fat clock on the chimney-piece ticked with a heavy comfortable regularity. Here there would always be time to talk, to say what you wanted to say, to relax from the cares brought about by the bright day outside.

I wonder how long it took Christie to get that description just right? So that all of us with a fancy to live in an old vicarage would be foaming at the mouth to go and find this room and settle down in one of those 'large shabby chairs' with a good book and a cup of tea. Incredible to me that there are people who are snooty about the writing ability of this amazing author.


Of course, while I was in the Penzance area I just had to visit The Cook Book shop in St. Just. Here you can browse the second-hand books and have a coffee or lunch or whatever you like. It's delightful. I came away with the bottom two of these books: 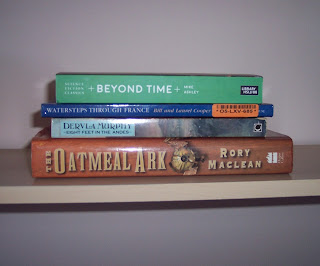 The Oatmeal Ark by Rory MaClean tells of the Reverand Hector Gillean who apparently built a ship in the early 1800s and sailed from the Hebrides to Canada to find the promised land. Couldn't leave that on the shelf, could I? Eight Feet in the Andes by Dervla Murphy is a book I've been after for a while so was glad to nab that for a couple of quid. The other two books are, Watersteps Through France by Bill and Laurel Cooper, this covers two of my bookish loves, canals and France; and the other is Beyond Time edited by Mike Ashley, time travel stories, sent to me by The British Library. Great cover on the latter: 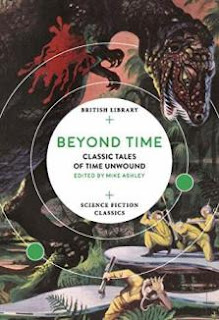 Many thanks to The British Library for that and it's been added to the pile for next year's reading.

I really do like Cornwall as a staycation destination. If we go with family, we tend to base ourselves in Newquay and travel out and about from there. My SIL reckons she knows just about every nook and cranny of the county, however a friend has just recommended a place we should visit, I am sure she has never mentioned … St Nectans Glen is between Tintagel and Boscastle and sounds totally idyllic, very much like a place hubbie and I discovered in Switzerland, many years ago!

I always tend to get banned from checking out any bookshops, book sales, or charity book shops, when we go out with company, however I really like the sound of 'The Cook Book' shop and I might get away with leaving hubbie in the corner, with a nice piece of Victoria sponge and a cup of tea, whilst I browse - what do you think?

I thought I had read all of the AC books, but 'The Pale Horse' is a new one on me, so I shall be on the lookout for a copy on my travels. Thanks for recommending :)

I think I see a book of time travel short stories on top of the stack...if so, I'd love to hear what you think of the collection. I'm always on the lookout for those and I'm finding them harder and harder to find.

Hi Yvonne. The nice thing about Cornwall is that, wherever you stay, nowhere is much more than 45 - 60 mins away. Yes, I've passed St. Nectan's Glen on the Tintagel road a few times but never been in. I'll bear that in mind next time we're that way.

Well funnily enough that's exactly what we did... parked my husband (he's a huge reader but never buys books) at one of the tables with a coffee and my sister-in-law and I went off to look at the books. Everyone was happy.

The Pale Horse was a new one on me too. It's actually in AC's 'Ariadne Oliver' series of 5 or 6 books, although Ariadne is not actually in the book very much. I've finished the book now and enjoyed it tremendously.

Sam: Yes, that's a time travel anthology... I put a better view of the cover at the bottom of the post. I'll make sure I do a proper review when I read it and if it's any good I will happily pass it on to you. I got it for free so would be pleased to give it a good home when I've finished with it.

Loved this post, Cath. I'm so glad to know what you've been up to in your reading world. This Christie novel does sound very good. I must admit I have read very, very few of hers.

Judith: Thank you. I realised I liked the posts others do that are more generally about reading and books rather than single book reviews. So I thought I'd give that a go and see how it progresses.

Up until about ten years ago my experience with Agatha Christie was quite limited too. I read a few as a teen and then nothing for donkey's years. Then I thought I'd give one or two Poirots a go and found them very enjoyable. I still haven't read 'heaps' but am slowly dotting a few in amongst other books and mostly liking them. I've also enjoyed her autobiography, in fact it's one of the best I've ever read, and a book she wrote about archaelogical digs she went on in Syria - Come, Tell Me How You Live. She used her experiences to write a handful of her crime books set in the area.

I've only read two Christie novels -- AND THEN THERE WERE NONE and MURDER ON THE ORIENT EXPRESS. I enjoyed them both, so I should definitely read more of hers. I'd never heard of THE PALE HORSE, but I might have to check it out. Thanks for the heads-up!

We've had lots of rain up here too, but not as much as a lot of the country. We went to the Lake District last weekend, fully expecting rain but it was lovely and sunny! cold, but sunny with blue skies!

As you know, Agatha Christie is one of my all-time favourite authors and highly underrated by some - have they read her books, I wonder!

The Pale Horse is very different I think but clever. I recently read it, ready for the tv adaptation over Christmas. At least then I will know if it’s a good version or not!

Susan: My pleasure. To be honest, a lots of Agatha Christie books are worth checking out.

Margaret: Very glad that you had good weather in The Lake District as it really is rather dismal in the rain.

Well quite, I wonder that too, so many not willing to give AC a chance.

Jo: Until you said I had no idea that the BBC had filmed it for airing over the Christmas period. Unfortunately I haven't liked their recent adaptations so I'll wait to see what they've done with it with bated breathe.