I don't do that much in the way of rereading. Partly it's just not my thing but also I'm always eager to move on to explore yet another new story. But I'm having a quieter reading year this year. Less challenges mean more time to wander wherever I fancy and The Morville Hours by Katherine Swift has led me to a reread of Ellis Peters's Cadfael books, previously devoured in the late 1980s and, like The Morville Hours, based in the county of Shropshire. They're set in the 12th. century.

So, this omnibus (how is it that that word can mean a collection of books in one volume and a method of transport?) includes the first three volumes in the series and is my 2nd. book for Bev's Mount TBR 2020 reading challenge. 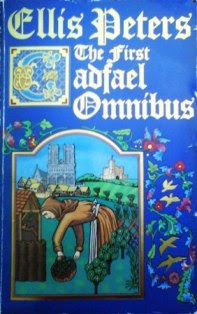 A Morbid Taste for Bones

After a life of high adventure Cadfael has settled into the Benedictine monastry in Shrewsbury looking for a quiet life of contemplation and gardening. His Prior (second in command after The Abbot) has designs on having the remains of a saint in the grounds of the abbey to increase its standing in the religious world of the 12th. century. They hear about St. Winifred who is buried in the wilds of North Wales and set out to see if they can acquire her for the monastry. When they get there the villagers, led by a local squire figure, are less than enthusiastic about parting with their saint. When the squire is found stabbed to death in the forest, Cadfael feels obliged to investigate because it's the monks who have clearly brought this trouble down upon the heads of the villagers.


One Corpse too Many

Shrewsbury is under seige by the army of King Stephen who is battling Maud (Matilda) for the throne of England. Shrewsbury being a supporter of Maud's, Stephen is there is root out the rebels. This is done in short order and 94 men are hanged from the battlements. Except that when Cadfael comes to attend to the bodies he finds there are actually 95. One of them has been garroted by persons unknown, but in a city in chaos after a seige how is he to find a murderer?

It's the middle of winter and Brother Cadfael's herbal remedies are much in demand. A dangerous one that he uses to massage into the bones of an elderly monk to ease his pain is procured and used as a poison to kill. The victim is Gervase Bonel, who has retired and decided to donate his house and farm to the monastry in return for him and his wife being looked after in abbey accommodation for the rest of their days. His stepson is immediately a suspect for the murder and goes on the run but Cadfael is certain the young boy is innocent. But if that's the case who did do it?

As I mentioned before, this is a series reread for me. I'm not excactly sure which year I first read them but feel it must have been somewhere in the early 1990s. I know I gobbled the entire twenty books up in about six months because my local library (Minehead at the time) had them all. And now I can see why I loved them so much. Everything just feels so real when you read these stories, within the first few pages of the first book Brother Cadfael feels like an old friend and in subsequent books there he is again and you're delighted! When you add such wonderful characterisation to superb writing, a glorious setting, and really excellent historical research you have a winning combination and no wonder these books are hugely popular and remain so even though some of them are now fifty years old.

In the first book I loved the very real sense and atmosphere of a village in the middle of a forest in North Wales. In the second, the air of menace at the end of a seige when the victors move into a city is palpable. The third book is more of a traditional whodunit but I loved the wintery atmosphere and the end where we find out who is going to be the new abbot of St. Peter and St. Paul in Shrewsbury... that really made me smile.

This omnibus has been such a pleasure to read this month. I have two more omnibuses, the third and the sixth for some strange reason. So I've reserved the next two single books from the library and will read those in February. Looks like I have a nice little project on my hands for the next six months or so.

I think rereading something we really like sort of makes us want to read more because of how much we enjoyed what we just read.. most especially because we enjoyed it more then once! I have a few books to get thru and then I plan on some rereading this year.

Did you know there's a tv series made of Cadfael? I watched it with my husband a few years ago- he liked the mystery aspects and I really like the herbalism and we both enjoyed the humor. I should have guessed they started out as books, wonder if I'd like them.

I read those three books many years ago, but would love to reread them! And I also loved the TV series with Sir Derek Jacobi!!

Pat: I think I probably don't do a lot of rereading because I have so many new books to read. It's kind of like I feel I'm wasting time. Which is absolutely ridiculous as this is supposed to be a hobby and you have hobbies to improve your life not to give yourself extra pressure. Right?

Jeanne: Yes, I watched the TV series years ago. I enjoyed it but Derek Jacobi was not my idea of Cadfael. He didn't feel quite worldly-wise enough for me. But it was a good series nevertheless. As to whether you would like the books, well I think they're better than the TV series.

Sam: Yes, that far back it probably would feel like a first time read. LOL I hope you still enjoyed it. When I reread from the 1960s my experience tends to vary. Sometimes I wonder why I liked the book so much, other times I'm blown away all over again. I would say that I find I've lost the intensity with which I read as a child and as a teen. Which is sad but just one of those facts of life.

Robin: The books bear rereading. I didn't know if they would as not all books do, but I think I need to learn that rereading is not a waste of time and brings its own rewards.

Oh, I love the Cadfael series! I've been reading it very slowly for years...I think I still have three or four books left because I've been savoring them. :) One Corpse Too Many is my favorite, but I like them all!

I read the early books in the Cadfael series as a teenager, but despite having enjoyed them at the time, I have to admit that I have never thought much about either completing the series, or going back to re-read the early stories, then carrying on the series to its conclusion!

I quite enjoyed the television adaptation, but like yourself, I did doubt the casting of Derek Jacobi as Cadfael, great an actor that he is.

On the whole I don't tend to re-read books, as there are just too many new authors to discover and great stories to enjoy!

Christina: That's the way I usually read a series myself, slowly, savouring them. I used to be a gobler but not so much these days.

When I read Cadfael before my favourite was The Virgin in the Ice, it'll be interesting to see if that still holds.

Yvonne: Ah right, so I'm not the only one who wasn't sure about DJ as Cadfael. I watched the series and enjoyed it but never thought that he was quite right. Not quite 'earthy' enough, DJ has a sort of etheral quality to him and for me that was not what Cadfael was.

I'm not a huge rereader either, like you I always want to be moving on to the next new book.

Thank you. Stay warm and healthy. :-)

I have never read these books but I do have the first three in paperback editions. (I never watched the TV series either.) It sounds like I need to find them and read the first one.

Tracy: I personally think they're worth trying. Depends on whether you think you'll like the time-period. I find the history very interesting but not everyone would I suspect.