I seem to be having a good reading month and am flying through the books. Better knuckle down and do a quick catch-up post.

Dr. Richard Shepherd is a real-life forensic pathologist who's spent his life working with the police. Not only that, he has worked on some of the most high-profile disasters in the UK: the Marchioness disaster on the Thames, The Hungerford massacre, the death of Princess Diana and many many more. In fact, it's stated that he's performed 23,000 autopsies and the book includes many case histories. Of course, a life working with dead bodies takes its toll, especially with family life and Dr. Shepherd is quite candid about his personal life and problems faced when his wife decides to train as a doctor. I imagine that if you're the kind of person who's interested in medical procedures then you would love this book. Personally, that's not my thing so I had to read this book in short bursts as sometimes it got to be a bit much. Nevertheless it was absolutely fascinating and I feel like I learnt a lot about medical and police procedure in murder cases.

Next, to lighten the mood, The Giant Rat of Sumatra by Richard L. Boyer:

In the Sherlock Holmes story, The Sussex Vampire by Sir Arthur Conan Doyle, Holmes describes the giant rat of Sumatra as 'A story for which the world is not yet prepared'. The story never did get written so author, Richard L. Boyer, has done the deed. And a good romp it is too. A man is pushed off the edge of a building close to where Holmes and Watson live in Baker's Street. He's a sailor just off a boat docked in the London docks. One of the dead sailor's colleagues tells a mad story of something frightening, brought aboard the ship and kept in the hold, that terrifies the whole crew. When the captain of the ship is found brutally murdered, aboard ship, with some horrible marks on him, Holmes realises that something is now loose in London... but what? I thoroughly enjoyed this rather madcap romp through Victorian London and and thence on to Shropshire. I felt it was very true to the original stories, good characterisation apart from one scene where I felt Watson didn't react as Conan Doyle would have written him. But otherwise, not bad at all. And it's put me in the mood for more Sherlock Holmes written by other authors so I've ordered this: 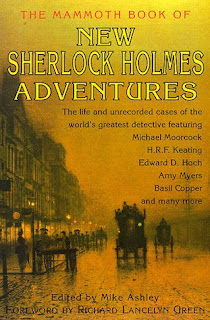 The Mammoth Book of New Sherlock Holmes Adventures, edited by Mike Ashley. I've read one or two other collections of his from the British Library and they were good, so hopefully this will be too. And what a stunning cover! Looks like a painting by John Atkinson Grimshaw, I'll have to check that when it arrives. Yes, happy to report the painting is 'Liverpool Docks' by John Atkinson Grimshaw.


Lastly, The Unpleasantness at the Bellona Club by Dorothy L. Sayers:

Lord Peter Wimsey is at his club, The Bellona, when a very elderly gentleman, General Fentiman, is found dead in the chair clutching a newspaper. No one realised he had died and therefore no one knows 'when' he died. Which turns out to be a problem because his estranged sister, Lady Dormer, a very wealthy widow, has also died. Her fortune was to go to him if she dies first, and thus to his heirs, Robert and George. But if the General were to die first the money would all go to her neice and companion, Ann Dorland. The question is, who was the first to die? Initially, this question is the main crux of the investigation and that's complicated enough. But when it's discovered that the old man may have died in suspicious circumstances then things really begin to unravel.

I love the way this book starts (in the Bellona club):

"What in the world, Wimsey, are you doing in this Morgue?” demanded Captain Fentiman, flinging aside the Evening Banner with the air of a man released from an irksome duty."

"Oh, I wouldn't call it that," retorted Wimsey amiably, "Funeral Parlour at the very least. Look at the marble. Look at the furnishings. Look at the palms and the chaste bronze nude in the corner."

"Yes, and look at the corpses. Place always reminds me of that old thing in Punch, you know - 'Waiter, take away Lord Whatsisname, he's been dead two days'."

Wonderful, absolutely wonderful. I can't help but be reminded a bit of P.G. Wodehouse when I read these Wimsey books. Sayer's touch with humour was every bit as deft and surely the two butlers, Jeeves and Bunter, are one and the same? Anyway, 'joyous' as always, and very complicated. About halfway through they seem to have it all worked out and so do you but then it comes to you that yes, there's another 50% of the book to go, so it can't all be sewn up or what will they talk about for the rest of the book? I've only got two more Wimsey's to go, The Five Red Herrings and Murder Must Advertise. But I might reread Strong Poison first as it was the first Wimsey I read and it would be interesting to read it again coming at it from the point of view of having now read the first five books. We'll see. The thing is, these books are eminently rereadable, always something new to discover I suspect. I also want to try the newer ones written by Jill Paton Walsh and have the first on my tbr pile, Thrones, Dominations, which was partly written by Sayers herself. Isn't reading fun?

It amazes me sometimes how well the Sherlock Holmes mysteries hold up even today. That really hit home when I found myself so completely immersed in the U.K. television series "Sherlock" starring Martin Freeman and Benjamin Cumberbatch a while back. That's still one of my all-time favorite television series.

Unnatural Causes sounds very interesting, but I don't think I would enjoy reading it, for the same reason you gave.

I think I will go back and reread The Unpleasantness at the Bellona Club someday, I remember the premise but not much else. Some of my rereads of Sayers' books have been successful, some not. Strong Poison is my favorite.

I will be forever grateful to PBS in this country for introducing me to Lord Peter. I love the shows, and I love the books. I wrote about this one almost 13 years ago. I can't believe it. Here if you want to read it: https://lettersfromahillfarm.blogspot.com/2007/11/book-reportthe-unpleasantness-at.html

Sam: When I first started to read Sherlock Holmes (The Hound of the Baskervilles in my teens) I was so surprised at how easy the language was to read, I was expecting something like Dickens. My favourite Holmes is Jeremy Brett but the modern 'Sherlock' series delivered Holmes to a much younger audience. I know this because my grand-daughter adored the series and she probably would not have read the original stories without that series. I liked it but I didn't love it, I think perhaps modernising him didn't entirely work for me but what a brilliant idea!

Tracy: No, I'm not going to recommend Unnatural Causes unless anyone is the kind of person who is fascinated by endless medical probings so to speak. And I do know people who are. LOL

There's a lot more to the Bellona Club than I have in my review... it's short as I'm trying to catch up. I'd recommend Nan's review which she has linked to in her comment.

I'm really hard put to choose a favourite. It used to be Have His Carcase but when I went back to the start to read the non-Harriet Vane ones I found I really loved those too, particularly Clouds of Witness. One thing is certain, rereads will be on cards for me this year.

Nan: Thanks for linking to your review! Excellent, I love reading your thoughts on books I've read. I thought your quotes were particularly apt, especially Fentimore's views on Rememberance Day. I can well understand WW1 veterans feeling that way.

I did go check out Nan's review as soon as I saw her link to it. I had forgotten it would be set around Veterans Day. Maybe I can read it around that time this year (if I can remember).

I remember really liking Clouds of Witness when I read it the first time, but when I reread it I did not like it as well. Not sure if it was because I remembered a lot of it or what the problem was.

Tracy: Yes, it's set around our Rememberance Day, the 11th. Nov. It's not a huge part of the plot but is there in the background with a few telling comments.

That's interesting that you didn't like Clouds of Witness as much the second time around. I wasn't crazy about Strong Poison the first time, I liked it but didn't love it. I plan to read it again and have a feeling I might like it more next time. Life is kind of weird. LOL

I hope that you have survived 'Caira' and 'Dennis' relatively unscathed. Hopefully with the turn into March just around the corner, spring might begin to make an appearance!

I also really like the new look home page you have installed. It is very modern and clean looking and I hope that you are pleased with it.

I read most of the original Sherlock Holmes and Dorothy Sayers books, but many decades ago when I was in my late teens. I would love to have the time to go back and revisit some of them, but I can't see that happening any time soon.

I'm afraid that, no matter how true to the original stories, I just can't get excited about re-writes or continuations of classic authors work by their modern day counterparts. I have recently taken on the promotion and review of 'The Treadstone Resurrection', which for me, will always be a remake of the original 'Bourne' series, only written under the auspices of a new author, Joshua Hood. I am definitely going to need to keep an open mind when reading a storyline which I will instantly be comparing to the style of Robert Ludlum!

It is great that you are enjoying a successful month of reading, which will hopefully stand you in good stead for those summers days you enjoy spending in your garden :)

Yvonne: Yes thank you, we survived Ciara and Dennis unscathed, I hope you did too? Feel very sorry for all of the flood victims, awful thing.

Thank you for your kind words about my home page, I am indeed rather pleased with it. I've had the same look since I started the blog in 2007 so it was time for a change.

I don't much care for rewrites of original stories either but I don't mind continuations, very much depending on the quality. Some authors can do it, some can't and really shouldn't bother in my opinion. Good luck with The Treadstone Resurrection.

I'm trying to be a lot more casual about reading this year, not fret about numbers etc. Not that I fret that much anyway as there are other things I like to do, gardening which you mention, but also my jigsaws and I want to start knitting again soon.