My first book for September is Smallbone Deceased by Michael Gilbert. 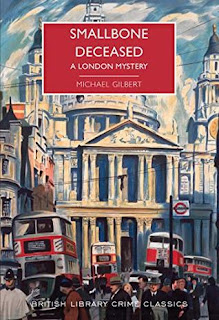 Henry Bohun is a young man who has has just got himself a new job with a firm of solicitors, Horniman, Birley and Craine. He doesn't sleep at night and hasn't really settled to a career, trying various different things since the war ended. The firm he's now working for is one that specialises in working for the higher echelons of society, Lord and Lady This and That and so on.

One of the named partners, Abel Horniman, is recently deceased and has been succeeded by his son, Robert. The elder Horniman was one of two trustees for the trust fund of Ichabod Stokes, the other, Marcus Smallbone seems to have disappeared, although no one is too concerned as he tended to disappear for months on end collecting ancient bits of pottery in Italy. Eventually though he does turn up... dead in a deed box and the body has been there for four to six weeks.

So who killed him? Inspector Hazlerigg of Scotland yard arrives to investigate the murder. It's clearly an inside job and the one person the detective doesn't suspect, Henry Bohun, because he's new to the firm, is roped in to help Hazlerigg's investigation. Working practices and office politics make this a very complicated case because people have secrets and loyalties and resent being asked personal questions. And then someone else is murdered and the thing becomes more far more personal when the lives of the staff are suddenly at risk.

Oh, how I loved this one. The writing is sublime, the author has a light touch with humour that had me grinning all the way through. And a light touch with dialogue too, every character came alive as they spoke. You have to keep your wits about you as you read, legal firms and their legal-speak are not always easy to get to grips with and I did struggle a little with trust funds and how they work. It didn't matter though, because it wasn't that that was important in the end, it was the dynamics of personal relationships: it always is.

Oddly enough there's a local connection for me with the author: Michael Gilbert was educated at Blundell's School in Tiverton where I live.

He served in North Africa during the war and was a prisoner of war in Italy, which is how he was able to write Death in Captivity so realistically. If you haven't read that I suggest you do, it's brilliant. I'm really, really impressed with Gilbert's books, to the point where I feel a collection coming on. I have Death Has Deep Roots to read, one of the BLCC's recent output, and Tracy mentioned The Black Seraphim in this post and I liked the sound of it so much I now own a copy.

Smallbone Deceased is book four of six books about Inspector Hazlerigg and I'll definitely be reading the rest and trying to get my hands on his standalone output. I love a project.

I'm glad you enjoyed your first September read. I love all the covers for those British Library Crime Classics. I would love to own the collection just for the covers.

I'm not familiar with Gilbert's books (I'll do something about that), but I'm intrigued by all those Dickens-like character names. Trying to figure out if the names of characters have some kind of hidden meaning is always fun, especially in mysteries.

I love these BLCC mysteries. There's something about them...their old-fashionedness, their style...that always makes me smile. :)

Carl: Yes, I'm a particular fan of the railway poster style of many of the BLCC books. Whoever decided to do that was inspired.

Sam: Great names aren't they? I love Ichabod Stokes, as you say very Dickensian. I don't think there was any hidden meaning, possibly it underlines how imaginative they were with names back then and how unimaginative we are now.

Lark: For me I think it's the writing I love, so competent, so much depth, and always assuming intelligence in the reader.

I would read this just for the cover!

Although I have a paid review due Monday, I am reading the second Andrew Taylor mystery and enjoying it more than the first.

It is a long weekend in the US - I have so much to do but instead am sitting with my book and my brother's dog...

I am so glad you enjoyed this book. That is such a lovely cover. Death in Captivity is also one of my favorite books. And I like his spy fiction stories about Calder and Behrens. Thanks for the mention and I hope you enjoy The Black Seraphim as much as I did.

I forgot to comment on your header photo. It is very cool and I want to be there.

I'm so glad you loved this book too! And I struggled a little with the details of the
trust funds and how they work as well.

I really do have to get started collecting the BLCC books, but I want these in hard copy, so that I can keep them on my 'real' bookshelves, they just look so amazing.

I was checking out all of the author's books in chronological order, over at Fantastic Fiction and I see that they have a link to ABE books, who have quite a few of the older ones up for sale. However they are horrendous prices, with nothing much below £10, so you might have to keep a list in your bag, for when you next trawl the charity shops or car boot sales!

I definitely enjoy the writing style, narrative and language used in some of the classic mystery stories, so 'proper and in the Queen's English' They are always a joy to read.

Any local authors, or authors with a local connection to me, are also going to get a top spot on my list.

Thanks for sharing a lovely review :)

Constance: The cover 'is' nice isn't it, and I too read books because of their nice covers.

I'm really pleased that that second Andrew Taylor book is better than the first, I'll look forward to your review when you get to it. I hope you enjoyed your long weekend.

Tracy: I didn't know about Gilbert's spy series, I must look into those. Thanks for the tip-off. I've now ordered a couple more of his books so I shall end up with a small collection which hopefully will grow into a big one.

Thanks for your nice comment about my header photo. It's a photo I took from a front bedroom window in 2015, it was a particularly good autumn for tree colours that year.

Margaret: Ah, not just me struggling with the legal details then. That's nice to know.

Thank you re: the header.

Yvonne: Oddly enough, although I read quite a few of the BLCC books I don't actually keep that many of them, just the ones I really love. The rest I pass on and people pass others to me so it works quite well really.

Yes, Michael Gilbert's books can be very expensive, but some with older covers are cheaper and those are the ones I've bought several of. I intend to do what you suggest though and keep an eye out in charity and secondhand bookshops. You never know your luck.

According to my list, I have read four of his books, but not this one which has been praised so often.
Is your header view from your house??

Sorry, Nan, I didn't spot this before now. Yes, the header is an autumn view from the house, taken four or five years ago.