Krakatoa (not east of Java)

Simon Winchester's book, Atlantic really wowed me last year. I was very smitten with his very accessible style of writing which didn't bore the pants off me when it so easily could have done. So I went searching for something else by him and chose this: 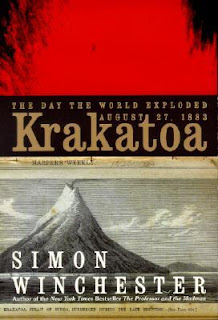 The first thing to get out of your head, and it's surprisingly difficult, is that the island is 'east of Java', as the film assured us in 1968, those of us who are that long in the tooth I mean. It's not. It is in fact 'west' of Java, in the Sunda Strait between Java and the island of Sumatra. And of course, as many of us are aware these days, it is only one of many volcanoes smack on top of the Pacific Ocean's 'Ring of Fire'.

The book begins with Simon Winchester describing how he visted the island group in the 1970s and when he went back 25 years later was shocked to discover that Krakatoa, or what was left of it, is now 500ft taller and is growing at the rate of 20 inches a month. I don't know about anyone else but I find that slightly concerning...

There's a long history of colonialisation in the area. It was under the Portuguese for a while until the Dutch snatched it from them and it became The Dutch East Indies. So it was under the Dutch when, on the 27th. August 1883, Krakatoa destroyed itself. It's said that it was and remains the loudest sound ever to be heard by mankind. Rodrigues Island, 2,968 miles to the west in the Indian ocean, was the farthest point at which the explosion was heard. Again, a record. 36,000 people perished, mostly killed by the following tsunamis. Tsunamis so powerful they were actually detected in the English Channel. Barographs recorded the shockwaves which travelled around the Earth 'seven' times and lasted for 15 days. 13% of the Earth's surface vibrated. And after all that, it was only the 5th. largest volcanic explosion - 'only' being a relative term - in known history. Although there seems to be some dispute about this, as in all things I suppose, Wiki lists it as the 2nd. biggest.

I should say that this is not just a book about the eruption of Krakatoa. The author discusses everything and anything even vaguely to do with it. So there's much about the history of the area, the geology, the geography, and the flora and fauna. Because it was in that area that naturalist, Alfred Russel Wallace, discovered what came to be called The Wallace Line and the science of plate techtonics eventually came into being... but not until 1965, years after his death. Who would have thought that I would find the explanation for plate techtonics so rivetting. I vaguely knew about it of course but not that it was subduction zones where most volcanoes are and that that was what caused Krakatoa, and many other volcanoes, to go off so spectacularly.

'Civilisation exists by geological consent, subject to change without notice'.

I risk being boring about this book so I'll stop and just say I thought it was brilliant. So many different subjects covered, not in a dry and boring manner, but in an accessible and interesting way. I'm very impressed with Simon Winchester's non-fiction. He has a lot of other books to choose from and choose I will. There's one about The Pacific Ocean, the San Fransisco earthquake, dictionaries, The USA, and a new one called, Land: How the Hunger for Ownership Shaped the Modern World. 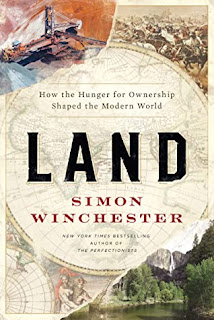 I shall be reading it.

And I'll leave you with this wonderful painting. It's by American artist, Frederic Church. It's said that he suspected Krakatoa would produce wonderful sunsets, (volcanic dust in the atmosphere) which indeed it did for years. So off he went to Canada and painted this in December 1883. 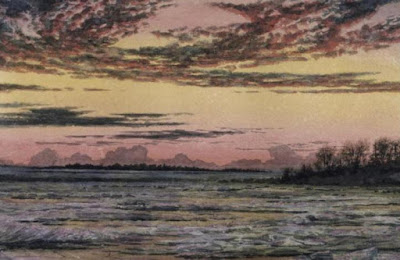 Sunset Over the Ice on Chaumont Bay, Lake Ontario. Gorgeous.

What an interesting book, Cath. I wish I had more time to read because I think my tastes are probably similar to yours. This sounds fascinating!

I had to look up to find out why the confusion about Krakatoa being east of Java. Per Wikipedia, the movie's producers thought that "East" was a more atmospheric word... how lame.

You have gotten me very interested in Simon Winchester's books. I remember your review of Atlantic and that one sounds very appealing. They are all pretty hefty reads though. I will look around and see what I can find.

The only book by Simon Winchester that I've read is The Professor and The Madman, which I loved. I'm looking forward to reading this one. (I find volcanoes oddly fascinating.) And that Frederic Church painting is amazing. :)

Val: I was really delighted at how absorbed I became in this book. Unusual to not want to put a non-fiction book down, I kept wondering what on Earth he was going to tell me next! I definitely want to read something about Alfred Russel Wallace soon.

Tracy: Yes, I gather that there really wasn't much of a reason to call the film that, other than they thought it sounded better. Beggars belief.

Yes, his books are quite hefty but the book was so interesting that it only took me a week to read and it could've been less as I really did have to stop myself reading at times as my eyes couldn't cope.

I've just bought The Map that Changed the World for my Kindle, about British geology. He's very good on the subject so I can't wait to read it.

Lark: Oh, you've read one of his books too! I'll bear in mind that the one you mention is good next time I'm buying. I'm oddly fascinated by volcanoes too. There's a lot of interesting stuff on YouTube about them :-)

Oh, Cath, I loved this post about Krakatoa and Simon Winchester and all you shared--
So fascinating. Simon Winchester has blasted onto my radar with his new book Land, which, I think, in the end, I will be purchasing. Thank you so much for turning me on to SW!
I do hope you are managing considering everything. We have some friends who have driven 260 miles round trip to get vaccinated. I have qualms about doing that. We're still waiting for an option that's a bit closer! Best wishes to you.

Judith: Glad you enjoyed the post and that my love for the book came over. Simon Winchester is my new(ish) favourite non-fiction author and I think geology and plate techtonics could be my new lockdown passion. LOL! I've popped The Map that Changed the World onto my Kindle Fire, and will be learning all about British geology in due course. But I also want his book about the Pacific and the San Francisco earthquake.

Yes, we're managing thanks, mainly because we're not going anywhere. Wow, 260 miles! I would not do that. We're assuming ours will be at our GP's surgery in the town, or in Exeter, about 20 miles away, both fine. Peter will be done first as he's 70 and I suspect he'll get a letter within the next 2 weeks as they've done about three quarters of the over 80s now. Me, being 'only' 67, will probably be well into February or even March. It's fine, we're coping well and just staying in. Groceries being delivered by the local supermarket etc.

My first reaction was "great sounding book, but probably not one I would read" - but hold on!

The more I read of your review, the more interested I became, more because of the location, rather than the volcano itself!

Last year I read a fictionalised memoir, 'The Interpreter From Java' by a Javanese gentleman called Alfred Birney, documenting his family history right back to before the Japanese occupation of Java in WWII, up to the present day.

It was a part of the world I had previously not explored, or even really given much thought to, however I really got into some map searching etc. as I was reading the book.

I'm not promising that I will ever read the Simon Winchester book, but I am going to keep a note of it in case I come across a copy on my travels. It sounds like one of those books you can dip in and out of.

Take Care both of you :)
Yvonne xx

Yvonne: LOL... 'hold on' indeed. So funny how often that happens to me too.

Like you, before I read 'Krakatoa' that area of Indonesia had not interested me 'at all'. I knew nothing about it. Also like you, while I was reading my book I was map searching all over the internet. Alfred Wallace's 'Wallace Line' for instance... the techtonic plate it's on. It's a feature of reading these books, as you discovered with The Interpreter from Java, that the area gets under your skin and it sends you looking for maps and more information, more books and so on. I've added your book to my 'want to read' shelf on Goodreads and will read it at some stage as it sounds fascinating.

Cath,
Just to respond to your reply:
We're doing fine, really. I think we have to be patient for everything that the Biden Administration is doing to get up to speed. I have been concerned that really old people and people who desperately need the vaccines are not getting served. It seems that it's just going to be "first come, first served, everyone over 65." I don't think this is right, because as our newspapers have reported, so many people who are very elderly and immuno-compromised can't drive 260 miles. A slow burn, for me, frankly. Our health care providers have emailed telling us not to call them asking for help with vaccines. These are our doctors emailing us saying, "DO NOT CALL US."
So, I suppose I might be described as "frustrated."
I don't care for myself. I just want Ken, who needs the vaccine to survive, to be vaccinated.
Other than that, we are perfectly fine, though very isolated, as I'm sure you are as well. But despite that isolation, we are managing pretty well. Reading, watching Netflix and British shows on AcornTV, walking, snowshoeing, removing snow, READING.
Wishing you and Peter all the best!