So, I put this photo up a several days ago, it shows the books I want to read in March. 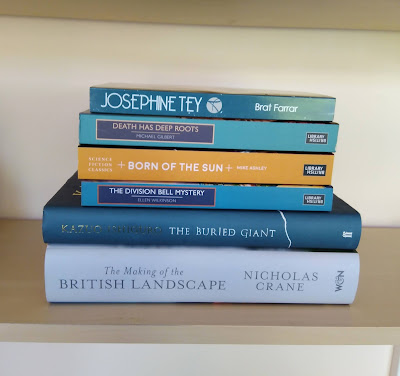 After posting I promptly took Brat Farrar by Josephine Tey off the top, started to read and found I couldn't put it down!

This is a book with an 'impersonation' theme. An individual turns up unexpectedly after years of being away or being thought dead, claiming to be said person. Are they really the person they purport to be or are they an imposter? From the very start we know that Brat Farrar is not Patrick Ashby. Thirteen year old Patrick is thought to have committed suicide eight years ago by jumping off a nearby cliff. A body was washed up eventually, it was unrecognisable but everyone supposed it to be the young boy. Brat Farrar is a foundling who looks so much like Patrick's twin brother, Simon, that a disreputable acquaintance of the family eggs him on to pretend that he's Patrick in order to do Simon out of his inheritance. Horses are the carrot being used, Brat is mad about them and the Ashby family breed horses. That description makes it sound very cut and dried, Brat Farrar 'bad', the family deceived and therefore 'good'. Of course that is nowhere near the case and this is quite a complicated story with many nuances, secrets being kept, and so on. I couldn't put it down and read it in two days, the writing is superb and I loved the Ashby family with all their individual quirks, longing for Brat to be the long lost, much mourned Patrick. There is a mystery here, I'm not going to go into it at all because it would be too spoilerish but anyone who reads a lot of mystery books will be able to guess I suspect. What a shame Josephine Tey died so young (she was 56) and only wrote six Alan Grant books, and five standalones, Brat Farrar being one of the latter. Such a loss.

Post Captain by Patrick O'Brian is book two in the Aubrey/Maturin series of books. I read the first book, Master and Commander, last month and liked it so much that I decided to read many more in the series this year. Enjoying this second instalment immensely, wierdly the first section is reading more like a Regency Romance but that fine, it's all good, and I'm sure they'll be at sea very soon. One of the discoveries I've enjoyed making over the two books is that the 'harmless' Dr. Stephen Maturin is actually a spy. I like Jack but Maturin's the interesting one. Great stuff!

In other news these two beauties arrived for me in the post courtesy of the British Library publishing people. 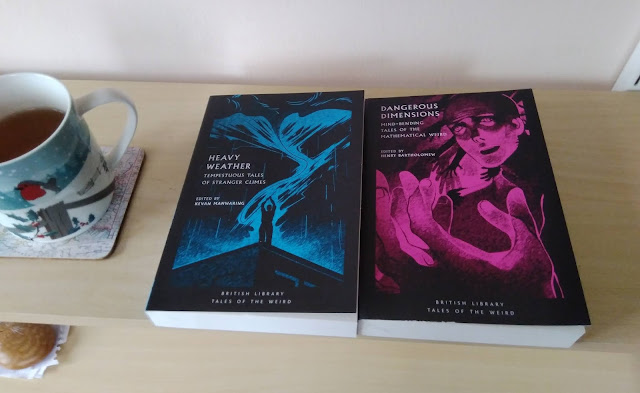 Both these books are part of the British Library's 'Weird Tales' series of books. Heavy Weather edited by Kevan Manwaring, is full of short stories about the weather and includes works by Herman Melville, Edgar Allan Poe, Doris Lessing, Daphne Du Maurier and more. It could not be more perfect for a weather obsessed person. (Hint... 'me'.) The second book, Dangerous Dimensions edited by Henry Bartholomew, is about 'the terrors that lurk in hitherto unknown dimensions'... 'probing the limits of time, space and matter'. Authors in this include, H.G. Wells, John Buchan, Algernon Blackwood and Robert Heinlein. Glorious! Chuffed to bits with these two.

My favorite thing about the Aubrey/Maturin series is the weaving of many of the same characters throughout the books and how they change (or don't) over time or how they deal with various of life's vicissitudes. Beyond the individuals, the various locations (e.g. lands, sea, oceans) and the ships they sail during their journeys all show varying aspects of their own personalities, too. Enjoy!

I have read all of Josephine Tey's Inspector Grant series two or three times, but I also want to reread her two standalone mysteries. It's a pity she did not write more novels.

I am envious that you are reading Post Captain now. I am in the middle of two long books right now and have a lot of reading already planned for March so may not get to it until April.

I wonder if Glen would like Heavy Weather; he like "weird" stories and he likes reading about weather. I will tell him about it. He recently read Rain: Four Walks in English Weather by Melissa Harrison and is now reading Winter: An Anthology for the Changing Seasons edited by the same author. Those are both nonfiction.

I love when you find a book that you can't put down. And those imposter mysteries are always fun. It's another Tey book to put on my TBR list. :)

I agree with Lark; it's always a good thing when a book so strongly grabs you that you can't put it down and even forget that you are reading anything else. That doesn't happen often enough, really.

I know embarrassingly little about Tey, but your enthusiasm is contagious. I'll have to look into her.

I knew you would like Brat Farrar! I love impersonation stories. There are really two types: one where the protagonist pretends to be someone else, perhaps for financial or other reasons; and the other is when the protagonist is tricked by someone pretending to be an individual. I grabbed a book from my shelves to have with me if I had to wait at a doctor's appointment and am worried I guessed the whole plot involving an impersonation in the first chapter. I hope I am wrong and an author I really like is not so predictable!

Brat Farrar's on my tbr list, too, Cath and I liked your review. Just read Miss Pym Disposes and I was reading a little about Tey's own life. She pretty much lived through the scenario of the book herself.

I've never read anything by Tey, but BRAT FARRAR sounds like a good place to start! I like books with this kind of premise and if the writing is good and the plot is more complex than it seems, count me in.

Pat: Yep, I do like to ring the changes a lot. Can't stand to be bored by reading the same thing all the time. LOL

Mary: I am indeed enjoying Post Captain. It has me as hooked as the first book, so much going on. 'Scriven' has just come into the picture and I suspect he's going to be something of a recurring character. I hope so.

Tracy: Yes, I agree, it is a pity Tey did not write more novels. Although sometimes when authors are very prolific the quality is not maintained, at least with Tey's dozen or so books the quality is always excellent.

When you get to Post Captain I know you'll enjoy it!

I've heard of the two books Glen is reading, both very good I believe.

Lark: Yes, it's great when you're grabbed by a book and can't put it down, doesn't happen as often as we would like.

The Tey book is huge fun, we have similar tastes so I think you would like it.

Sam: No it really doesn't happen often enough that you're reading a book that completely grabs you. The first 2 or 3 of Tey's Alan Grant books did not grab me but after those all of her books did, particulary The Franchise Affair which I think was made into a film.

Constance: And you were right! I do love Brat Farrar. I was hooked right from the beginning. I don't think I've read many impersonation books at all. I honestly can't think of one but I must be mistaken with all the vintage crime books I've read. I hope your current book is not as predictable as you fear.

Nicola: I just spotted your post about Miss Pym, a book I really loved. Will go and read it in a moment. I hope you get to Brat Farrar soon... it's worth making room for.

Susan: The writing in this is *very* good and the plot was more complex thatn it seemed but most of all I just loved the family and the setting.

The only book I've read by Josephine Tey is Daughter of Time, her brilliant book about Richard III. I read it donkeys' years ago and loved it. It seems I'll need to read some more by her. I've heard of Brat Farrar, so I think I'll try and get a copy. Thank you, Cath!

Val: You're so right, Daughter of Time is brilliant. I also really recommend The Franchise Affair, another one I couldn't put down.

Some of my other favorite impersonation stories are:

The Ivy Tree by Mary Stewart, which I am sure you have read
The Likeness by Tana French, which I think is her best book
Savannah Purchase by Jane Aiken Hodge, sister of Joan Aiken

There are others but it might be a spoiler to tell you!

The last snow has melted and we had some abnormally warm days (my nephew came over in shorts but he does that even when it's cold out) but tonight it is chilly again and I am wearing layers and turning up the heat.

Constance: No, actually I haven't read that Mary Stewart, I've read a few of her books (the Merlin trilogy, Catch Not the Cat and so on) but not that one. I will get to that. The Likeness I have on my radar as I do need to read more Tana French, so far I've only read In the Woods. I've 'probably' read Savannah Purchase way back when.

Your nephew sounds like my daughter's partner. He's from South Africa and wears shorts as far into the winter as he can bear. I'm like you, I like to warm and cosy.

I'm very intrigued now to get to Brat Farrar that has been sitting on my shelf for way too long! I just read a review of it over at Stuck in a Book too! I do enjoy Tey! Too many books and not enough time! You read such an eclectic array of books. Always something interesting here.

Peggy: Thank you, glad you always find something interesting here. I don't think you would regret reading Brat Farrar.