The Villa by Rosanna Ley

The Villa by Rosanna Ley was one of those 99p, spur of the moment, Kindle grabs that I suspect quite a few people have indulged in over the last year or so. Sicily was the draw for me, I must admit, having become addicted to Inspector Montalbano and, to a slightly lesser extent, Young Montalbano, on BBC iPlayer and fallen for the Sicilian scenery and architecture, a book set there was an absolute no brainer. 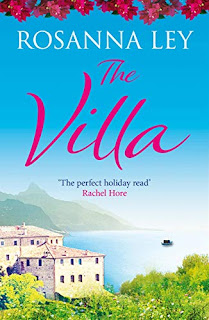 The plot of this book is centred around three women.

Flavia: A seventeen year old young woman living with her parents on the island of Sicily during WW2. It's a claustrobic existence, girls are not free to do as they please, controlled by their fathers mainly, even to the extent of telling them who they're going to marry. But Flavia is different, she wants another kind of life and when she discovers a young British airman in the wreckage of a glider she senses another world to which she can aspire.

Tess: Flavia's daughter is in her late thirties. She has a good job in England but has just been passed over for a promotion which she feels she should've got. Mother of a teenage daughter, just spreading her wings, Tess feels she's at a crossroads and gives in her notice at work. When news comes that she's inherited a villa on the island of Sicily from a man she doesn't know, Tess's astonishment turns to 'what if...' but there's a snag: her mother is vehemently against her going to Sicily to solve this mystery.

Ginny: Tess's eighteen year old daughter is just taking her A levels. It's assumed she will then go on to uni as she's clever but this is not at all what she wants. Her father disappeared before she was born, leaving her mother, Tess, to bring her up on her own. The two have always been very close but that's changing as Ginny grows up, discovers boys, keeps secrets.

So Tess, does go off to Sicily, naturally. And Things Transpire. She discovers a long-standing family feud, tackles a years old mystery and realises that she is entitled to a life of her own but... what about the ties of history? Sicily is not called a 'dark island' for nothing, something her mother, Flavia, knows only too well.

Sometimes these 99p random grabs turn out to be little gems and so it was with The Villa. Yes, it is a light read, there are elements of romance and holidayitus, but there's also a lot of history, a whole culture to discover, strong depictions of the life problems we all encounter along the way. I liked reading about the cuisine of Sicily via Flavia's writings, I loved the secluded little coastal town where the villa is, and there was good depth of characterisation, the people were not cardboard cutouts, they felt very real and so did their problems.

Rosanna Ley is a new author ro me but she's written a whole clutch of books set all over Europe and further afield. I realise I do actually have another hers on my Kindle, (anyone else got no clue what's lurking on there?) The Saffron Trail, set in Morocco. Very intrigued by that so will get to it soon.

My sis the reader! No matter how big or how small, my sis will read it! Just as I enjoy Michael Scotts short stories when they come out, being small doesn't mean you can't enjoy it!

Sounds good, Cath. I'm a sucker for "generational novels," so I expect I would enjoy this one. It's kind of funny that the older I get, the more the generational sagas appeal to me.

It's probably good that I don't have a Kindle. It'd be full of spur-of-the-moment purchases like this one within the first month. ;D

I like the idea of inheriting a villa on the island of Sicily, and the generational aspect sounds good.

I have the same problem with my kindle. I just discovered two short story books on my kindle that I did not know I had. Very fortuitous, but disturbing that I can forget so much.

I like the idea of inheriting a villa - never mind Sicily I'd take Provence, Nice, Ravenna, Florence take your pick! sounds delightful.

I have a feeling I might have read this. It sounds very familiar, but I’ll look it up just in case! In any event, I think I would enjoy it too!

Pat: Yep, I'll pretty much read anything however big or small but so many books seem to be huge these days. We need a few smaller ones! LOL

Sam: I like a good generational novel too. In this one it was interesting to see how much the grand-daughter had turned out like the grandmother.

Lark: Yes... owning a Kindle can be a perilous thing. LOL

Tracy: I think we'd all vote for free villas in Italy given the chance. LOL My Kindle is a huge black hole into which I shove endless cheap offers on Amazon. But sometimes, just 'sometimes' it really pays off and I enjoyed this 99p buy. And of course one plus side is that my bookshelves are not groaning with all these books I want to keep.

Mystica: Me too. Sicily's a bit hot, I'd probably go for Tuscany (hot too I suspect), the Italian Lakes, the Alpes Maritimes in France... or, most likely, a place in Brittany.

Val: It was such an interesting read, I didn't quite expect all the historical detail and depth of character.

This sounds very enjoyable, especially when all our traveling is through books!

I often think about my first grade classroom - I don't remember how any other classroom was decorated but that room had an Emily Dickinson quote above the blackboard: There is no frigate like a book to carry you lands away.

I assume my teacher told us what a frigate was as I certainly did not know that word at 6!

Constance: The book was huge fun. I like the word you used in your recent blog post, 'implausible', but it's good to suspend disbelief at times and enjoy a bit of daftness.

Oddly enough I used to have that Emily Dickinson quote on my blog once upon a time. Not sure now why I removed it.

Love multi-generational stories! Sounds really good. There are many books lurking on my kindle app and iBooks! Good ones I'm sure and I wonder if I'll ever get to them with so many physical books laying around the house!?

Peggy: I like multi-generational stories too and this one was a real hit with me. What a problem we readers have with all these books... luckily a 'nice' problem.

I am going to buy this book, thanks for the review. Free villa in Italy, yes indeed. I have such large TBR shelves and I am decluttering, so I made a vow to buy no books until June. But Kindle books I will buy because they don't add to physical clutter. I prefer books printed on paper though.

Terra: Yes, I would be happy with a free villa in Italy too. Like you I'm trying not to buy many physical books but for Kindle books I make an exception because they take up no room.