Catching up with reviews and currently reading

A couple of books to catch up on today, starting with Into the London Fog, a collection of weird stories, edited by Elizabeth Dearnley.

This was a bit unusual for one of the British Library's wierd collection of books. I bought it thinking it was, as they usually are, all fiction, but it turns out 4 or 5 of the contributions are actually non-fiction... either essays or accounts of real-life crimes going on in the city. For me, that wasn't too much of a problem as I actually like reading essays, but for some it might be and Goodreads reviews bear that out. Each story came under the heading of the part of London where it was set, Whitechapel, Waterloo, Mayfair (referred to in the story by Rhoda Broughton as 'May Fair' so I assume that's how it used to be known?) and so on. Favourites included the essay by Virginia Woolf where she goes out for a walk on a late winter's afternoon with the excuse that she needs a new pencil. Delightful description of a second-hand bookshop in this very atmospheric piece. I also enjoyed The Demon Lover by Elizabeth Bowen, a tale of a woman being haunted by her fiancé who died in WW1. The Mystery of the Semi-detached by Edith Nesbit was also very good. It's another story of an engaged couple torn assunder by circumstances. Spring Heeled Jack, an anonymous piece written as a newspaper article, recounts how London was terrorised in the 1830s by somebody - or more likely a group of people - setting out to scare people to death... dressing up to look frightening and jumping out at ordinary folk going about their business. There were deaths apparently, people dying because of a weak heart or as a result of running away and getting knocked over. All in all, this was rather a patchy compilation. A few good stories, a couple of interesting essays, but nothing I was completely bowled over by apart from possibly the Woolf essay which I liked a lot. I need to read her, A Room with a View.

And now... I was going to say 'for something completely different'... but Elly Griffiths' The Lantern Men does actually have its creepy side too.

So, this is book 12 of the author's well known 'Ruth Galloway' series of murder mysteries based around the archaeology and countryside of Norfolk. Ruth has moved on since the last book. I won't say too much but she's no longer an archaeologist with the University of Norfolk and no longer helping the local police and Harry Nelson with their murder cases. However. (There always is one of those.) A serial killer Nelson thinks killed more women than he admits to has said that he will make a deal. He'll tell the police where more bodies are buried as long as Ruth is brought in to take charge of the dig. She can't resist, naturally, partly because it all seems to be tied in with a place she's just been to on a writer's retreat but also - it's Nelson. A local legend concerning weird lights luring people to their deaths on the marshes and known as 'The Lantern Men', also comes to the fore, which gives the whole thing a supernatural bent.  Lots of twists and turns in this instalment, making it an excellent read for autumn and Halloween. It was also nice to catch up with Ruth and Harry and the extended family, also the wonderful Cathbad. And the Norfolk coast plays its part as usual, love the salt marshes as described, wild and wonderful. So much atmosphere in these books, I love them. 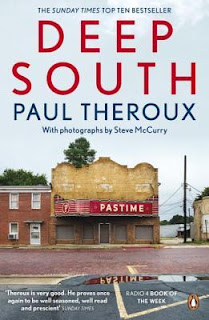 Which I absolutely 'love' and have decided to take my time over. In fact, as Theroux's visits to the The South take place over a year, season by season (I've just finished autumn), I may well read the book in a similar manner. Which might mean I don't finish it until next August. I'll have to think about it. I'm quite in favour of 'slow reading' sometimes... bit like 'slow cooking' only books. :-) 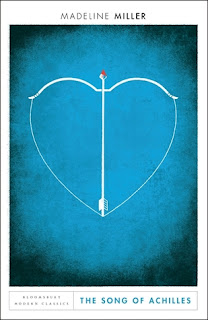 Hmm. I like it. But not once have I felt compelled to pick it up and read on because I'm excited about what happens next. I'm sure you all know how that feels? My knowledge of Greek mythology is sketchy. I took the 'O' level in the late sixties so I'm familiar with names and deeds but that's about it. I want to increase that scant knowledge but the subject is vast so I've also just started this for basic background info: 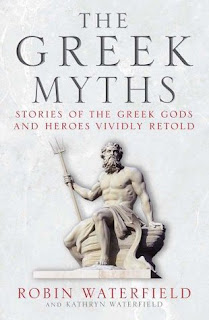 Another one to read slowly and savour. And 'hopefully' learn something! Whether it'll stick or not is another matter. I do feel rather excited that there's quite a lot of fiction out now that puts flesh on the bones of all these myths. So that could make for some fun reading. And that's what it's all about, right?

I had thought that 'Into The London Fog' might be worth taking a look at, however your honesty about the book has had me removing that one from my 'wish list', as I don't want to keep books on there which I know I shall never read! That takes my Goodreads 'Want To Read' total down to a mere 1,102!!! I have spent a few short periods rationalising other aspects of my Goodreads account, so I really do need to tackle that 'Want To Read' list next, as some of the first books to be added will probably be described as 'classics' by now :) :)

I have all the Elly Griffiths books on my Kindle, so 'The Lantern Men' will most certainly have to join them. Guess how many of those I have gotten around to reading - I'll bet you can't!! :)

I quite enjoy watching Louis Theroux's travels on the TV, but this is not the kind of book I could sit and read, not visual enough for me I don't think. I must see if Paul's writing was similarly adapted for television.

Thanks for another lovely post and I hope you manage to have a peaceful weekend :)

Ooh, I'd love to read the Paul Theroux one, but I MUST get through some of my existing pile first. I still haven't got to Lawrence Durrell yet. Sigh. Time...I need more time!

This has reminded me I have couple of books of Woolf's essays,and I still haven't read them all! I think I've read one about a secondhand bookshop, called Street Haunting? I am behind with Elly Griffiths' books, so I really want to get back to them.

Yvonne: I won't say I was disappointed with the London Fog book but it really wasn't what I was expecting. Sometimes this can be a good thing but here it left me feeling rather ambivilent. I apparently have 1,327 books on my 'Want to read' shelf on Goodreads. That's ridiculous so I need to go through that and be sensible about what I am actually going to get to. You made me laugh with your 'classics' comment.

And also with your 'How many Elly Griffiths books do you think I've read?' Believe me, you're no worse than me.

As far as I know Paul Theroux's travel books have never been featured on TV. In fact, very few classic travel writers ever seem to be. Writing-wise TV channels only seem to have heard of Charles Dickens, Jane Austen and P.D. James.

Thank you. I will. Thanks for stopping by.

Val: I can already recommend the Paul Theroux, but there's only so much time in the day and you have a busy life.

I've only got to one Lawrence Durrell myself. I have his Provence one lined up for the European challenge for next year though, so hopefully that will change. I also have your Walloon Days lined up for the challenge and Lisa's second book about her time in Galicia.

Margaret: Yes, the essay by Virginia Woolf was called Street Haunting. Such a lovely atmosphere of London streets on a cold winter's afternoon just as it's getting dark. And the bookshop was wonderful.

Thank you, thank you, thank you. I've been racking my brain trying to remember the name of the author who wrote all those Greek books in the 60s and 70s. Mary Renault! I knew they were excellent and that I wanted to read them but do you think I could remember her name? Anyway, I can't wait to hear what you think of the the first Alexander the Great book.

I'm so far behind in Griffiths' Ruth Galloway series. I can't even remember now which ones I've read. I hate when that happens. And I really don't want to start over from the beginning, you know?

I am glad you are liking Deep South. I will have to find a copy someday. I like the idea of reading the book slowly like that but I have never been successful at that.

Also glad that you continue to like the Elly Griffiths series. I am very far behind you but I will continue moving on in the series.

I got very into essays last year, bought a few books of essays, then moved onto something else. I do hope I get back to them someday.

Tracy: I've managed the slow reading thing a couple of times but by and large I'm not that great at it either. I either lose interest altogether or forget to grab it when I should and end up reading about spring in August. We'll see how this goes...

The RG books can be a bit frustrating at times. Excellent plot and characterisation but oh my goodness, can't Ruth and Harry see what's so obvious to the rest of us?

Yes, I've come around to essays over the past few years too. But a few a year is enough, I couldn't live on a diet of them.

You have the widest variety of reading of anyone I know!! That's my "sis"!!

Pat: I think it's to do with my short attention span... I need lots of different types of books to keep my interest. LOL

I love the cover of The Lantern Men...alone, it is enough to make me curious about the book. I'm sure it won't surprise you, though, that I'm unfamiliar with the series - and jumping in at book number 16, especially if the main character has gone through some recent changes, seems a little risky. I'll have to look at the earlier books in the series, I think.

Sam: Yes, that's a good cover on The Lantern Men. Very bleak and lonely like parts of the Norfolk countryside are. Yes, there is huge character progression right from the start in the Ruth Galloway series so book 12, which this is, would not be the best place to start.

I've decided to at least try to read Deep South over a year. We'll see how it goes. I've put it away until the 21st. of December, the start of winter, but I may in fact leave it alone until the new year.

I am intrigued by Into the London Fog, especially as it has non-fiction essays too. I will search for it any the libraries. xx

Anca: Yes, I definitely think the London Fog book is one to get as a library book, hope you have some success finding it.