I'm a bit late but my second and final book for the 1954 Club challenge, which was hosted by Karen and Simon, was Maigret Goes to School by Georges Simenon. 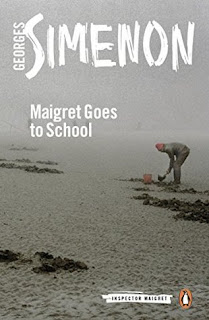 In the police station in Paris where Maigret works, the room where people wait, hoping to be seen by a police officer, is known as Purgatory. And wait they do, sometimes for hours, depending really on the whim of the officers concerned. This is precisely what happens to teacher, Joseph Gastin, who is running from a small village near La Rochelle on the French Atlantic coast. An elderly woman has been shot and killed and it seems Monsieur Gastin is the prime suspect. Fearing he will not get a fair hearing in the village, the teacher has headed for Paris hoping he can persuade the famous Maigret to come back with him and help prove his innocence.

Spurred on by he knows not what, possibly the approach of summer, possibly the promise of oysters, Maigret decides to go. It's not his patch so he has no jurisdiction... luckily the officer in charge in La Rochelle doesn't mind, but the minute they arrive he nevertheless arrests Gastin. Maigret is left to settle into the village, look at what's going on and try somehow get beneath the front the villagers have errected to keep the truth to themselves.

These are my favourite Maigret yarns... those where he leaves Paris and takes up residence in what is often a coastal area, cut off from civilisation in a manner in which we find hard to fully understand these days with our motorways and instant communication. It does mean we lose the presence of his other officers, Luca, Le Point, Janvier etc. and that's a shame but it's made up for in my opinion by Simenon's brilliance at depicting these insular regions.

Because insularity is what's damning the school teacher of course. He's not local, not 'one of them', so they have no compunction whatsoever in letting him go down for a murder he may or may not have committed, just as long as it's not 'one of them'. Luckily Maigret, coming from another such village himself, understands this very well. He also knows about the secrets that lurk behind the front doors of these places, who's sleeping with whom, who drinks too much, who likes guns...

I enjoyed this very much but I do sometimes wonder if they present better on-screen than they do on the page. We've recently been watching one of the original Maigret series from the 1960s, starring Rupert Davies, on one of the obscure Freeview channels. I think I saw somewhere that his was a portrayal that Simenon himself enjoyed, and I'm not surprised as each episode has been really excellent. I'm actually old enough to have watched this version as a child, it was 'must watch' TV, so I was a big crime fan even that far back. In fact, I've enjoyed all of the various series I've seen with actors, Michael Gambon and, more recently, Rowan Atkinson, and it does seem to me they translate very well onto the small screen. Some of the books are better than others but all of the TV episodes are enjoyable.

I should add that I know the area this book was set in as we had family who lived near La Rochelle for a while, so it was quite nice to be transported back there while I read the book. I gave it 3 stars on Goodreads and am now thinking I might've been a bit mean as Maigret Goes to School really was very readable indeed.

I like those 'Maigret on the road,' books, too, Cath. And, yes, that seaside setting and the small-town insularity are appealing for this sort of story. One of the things I like about the Maigret stories, too, is his way of getting to the truth. He finds ways to talk to people and find out things that I'm not even sure I can describe well, but he has the knack if that makes any sense.

I still haven't read any of these Maigret mysteries. I've been aware of them for years, and have always meant to give one of them a try...but you know how that goes! Other books keep getting in the way. :)

I was just recently lamenting that I had not read any more Maigret books since early this year. This one does sound very good. I will look out for a copy.

I will have to look into which of the Maigret TV adaptations are available for us to view. I would like to try any of them.

The Maigret books sound delightful. The setting and time period make me even more curious.

As I was reading your post I thought this book sounded very familiar - and then I realised I'd downloaded a sample, but didn't buy the book. I'm glad you enjoyed it so much, it is one I want to read. I agree about the TV versions, and for once I think they are better than the books.The books can be a bit too brief. I'm old enough to remember watching the Rupert Davies series too and I like the Rowan Atkinson programmes as well.

Margot: It's nice to meet someone else who likes the Maigret on the road books too because I think most people prefer the Paris based ones. But I love Simenon's ability to create a sense of place, I think he must've loved wild, coastal areas because he is superb at describing them. And yes, I agree, I also like hown Maigret is so good at wheedling details out of his suspects.

Lark: And it's 'impossible' to read absolutely everything, despite how much we might want to. So I understand your predicament completely. But it's a nice problem to have I suppose. :-)

Tracy: Yes, I understand that feeling of missing a series that you haven't read in a while. I have a handful that I mean to return to soon. But I love the way that a Maigret book is very easy to slip into your reading schedule, them being slim volumes and quick to read.

Diane: Yes, early to mid-20th century France is quite an interesting setting though oddly enough WW2 does not warrant even a small mention if memory serves.

I read these books avidly as a teenager and now you have made me long for them all over again.

I know what you mean about the stories probably presenting better on screen, but don't you think that is just a sign of the times, as the writing is couched in words and phraseology, almost alien to us these days? I quite enjoy the 'reserved' narrative and dialogue of these classic series, however I guess too many of the books in a short space of time would have me longing for more action and 'life' in the stories!

Personally, I didn't rate Rowan Atkinson in the part of Maigret and only watched one of the programmes. But I think that is because he is so 'typecast' as a comedic actor, I just can't visualise that face in a serious role!

Thanks for the trip down memory lane and enjoy your Cornish break next week :)

Margaret: I think this one is worth a read. I found it a little different to the Paris based ones as he's dealing with village mentality and also the thinking of young children. Yes, I do actually think that the TV dramas have the edge on the books. And I'm really enjoying the Rupert Davies version I must say. Rowan Atkinson really did surprise me once I got used to him. What a pity they made so few with him.

Yvonne: Yes, the dialogue in the books is very much what you might call 'sparse' and these days writers are far more likely to write in a much more fluid manner with more depth. I couldn't live on a diet of Maigret books but the odd one now and then is fine. To be honest I like more 'body' in my books, I want the characters fleshed out and I want history too.

It's obviously a very personal thing but once I got used to Rowan Atkinson as a straight actor I was fine. At first though you're waiting for him to pull a face and there were also moments of humour when he delivered a line in his own inimital style. It wouldn't work for everyone though and I suspect you weren't alone in not liking it much.

Thank you, I'm taking loads of books... of course!

I agree that it took some getting used to to see Rowan Atkinson in the role...franklym a whole lot of getting used to...but in the end, I thought he was pretty good. The novels are fun for me because of the decades they are set in as much as for any other reason. And, too, I like the author's style.

Sam: Absolutely it did, I kept expecting a Mr. Bean face or a Blackadder response and in all honesty there were one or two funny moments. Yes, I find there's a bit of a difference between those set in the 1920s and those from the 50s.