Into the Tangled Bank by Lev Parikian

This is my 3rd. book for the 20 Books of Summer '22 which is being hosted by 746 Books. I've had it on my tbr pile a couple of years now and it seemed like a good book for the summer reading challenge. 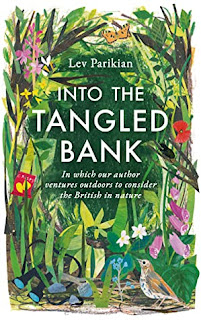 Lev Parikian sets out to discover what us Brits really mean when we say we love nature. Are we serious ramblers and campers, donning all the kit, grabbing the Kendal Mint Cake and marching off for days into the Scottish Highlands (and ending up having to be rescued by the Mountain Rescue people - sorry, me being cynical)? Do we just like a stroll along the coast, around a National Trust property or a local park? Or do we just love sitting in front of the telly watching David Attenborough commune with gorillas or the Spring Watch people having a jolly time?

It's a very interesting question. The author begins his investigations in his own home:

'Whether we like it or not, we share our homes with other species: dust mites lurking in our mattresses; silver fish feeding off food scraps and scuttling off behind the skirting board; fruit flies, appearing as if from nowhere at the first sign of a half-mushy banana; daddy-longlegs, flapping about melodramatically near light bulbs; house flies, buzzing around aimlessly and failing to go out through the window you've pointedly opened for just such a purpose..,'

As he points out,we're fascinated by all manner of creepy crawlies outdoors but find them indoors and we're not quite so enamoured. (My own particular aversion being house flies... although I'm not mad about spiders the size of your hand trotting indoors in September either.)

The garden is his next port of call, followed by his 'local patch'. Lev was a keen birder in his teens, then life happened, as it tends to, but now in his 40s he has returned to the hobby with renewed interest. Birders tend to have a 'local patch' where they do the majority of their bird watching and his is Norwood Park. But he also investigates other local patches, in one case, Gilbert White's in Hampshire. It's somewhere I've always fancied and I'm even more determined now as the countryside around the house sounds wonderful. (It's not far from Jane Austen's house at Alton so here's me dreaming of killing two birds with one stone. Not sure that's a good comparison to make when reviewing a nature book...)

Chapter by chapter Parikian deals with subjects such as nature programmes on TV and does this raise our expectations too much when we actually go out to view nature? Nature in captivity, zoos, Slimbridge wildlife reserve and how Peter Scott brought that into being. How the RSPB began... it was started by women who weren't allowed into the mens' bird watching clubs so they started their own. He takes a trip to the Isle of Skye (envy, envy, envy) and to Skokholm off the coast of Wales.

What I was really taken with in this book is the humour. He describes in one chapter how he tries to draw the birds he sees (as birders are supposed to be able to do), in one case a heron, and it's hilarious. To be honest the writing is superb and the best bit about it is his very British turn of phrase. Wonderful dry humour and I chuckled all the way through. Some of the references might only be understood by Brits but I can't imagine anyone giving up because of that.

The final chapter took quite a turn for the unusual as the author turns to astronomy. I'm still not quite sure why but it was fascinating. He visits the International Dark Sky Park in Northumberland - one the darkest places in Europe - and goes to Joderall Bank in Cheshire to view the moon and our part of the galaxy. He concludes:

'We are an impossibly tiny speck. And that's fine. And if it scares the bejeezus out of people, I happen to find it somehow reassuring. Because all these encounters - the butterfly on the flower, the eagle over the water, the light from a distant star and all the rest of it - represent the slotting-in of a tiny piece of our universe jigsaw. We'll never come close to finishing it, but nonetheless we persevere, constructing our own little corner of it in the hope that one day we'll be able to stand far enough away for some of it to make sense.'

Wonderful. If you have any interest in nature, the UK countryside, human nature, birds, insects, history and so on and so on, try this book. It will certainly be one of my favourite non-fiction books of the year.

You are lucky you get to post on FB. I am attempting to read what little I can... the book is 871 pages.. It'll be a while LOL

This certainly does sound like a good book. Some of his other books sound interesting also.

Sue: I just had to rescue you from the spambox. I don't know what game Blogger is playing with people's comments these days but it's very annoying.

But yes! Well worth reserving this one from the library as it's a real treat.

Pat: I can no longer post on FB on my desktop PC, the only thing I can do is 'share'. It won't let me post an original post any more. I have to do that using my tablet and I can only comment using my tablet too. So, rest assured you're not the only one having trouble with FB.

Tracy: Yes, he's written a smal clutch of quite interesting books, he's a thoughtful writer so I'll be reading more.

I'm curious when this one was written? You make it sound so good. I have so many books I want to read right now I hate to add more but, I always end up saying it's only a few more books.

Hi Diane. The publication date for this book was 2020, so all the wandering around and so forth would've been before the pandemic. (Have you noticed that everything has now become 'before the pandemic' or 'after the pandemic'?) Oh, I know exactly, I add books willy-nilly to my 'want to read' shelf on Goodreads knowing the likelihood of me ever getting to them before I pop my clogs is remote to say the least!

As you know, I am not a huge non-fiction reader, although that is only a matter of immediate gratification and preference, and of course, time!! - and not because I don't enjoy sharing 'real life' experiences with some exceptional and entertaining authors.

We definitely come into your second category of nature lovers - a stroll along the coast, or around the park or NT gardens. We do watch nature programmes on TV occasionally, although by the time I had read Lev's investigations of the bugs present in the average home, my skin was beginning to crawl and I shall probably never sit watching TV in the dark again!

I am not a huge fan of zoos or wildlife parks, however with so many species becoming extinct, this might be the only opportunity for future generations to see many of the animals. I know this is always a very touchy subject with conservationists and I do think that wildlife parks are probably the only way to go into the future, with much more stringent attention needed in legislation for habitat and conditions.

I do love the cover of this book too, so all in all, probably one I should make the effort to read! :)

This is going on my wishlist - but I may have to buy it for myself!! I'm with you about house flies and big spiders. I'd add ants to my 'can't stand' list - everywhere we've lived there have been ants, not so bad in the garden, but never in the house.

It is so hot and muggy here today I've had to come inside this afternoon. I wilt in the heat.

Very sorry to be so late to the party, Cath! I love the idea of exploring nature. I have to confess that I have my limits when it comes to being 'outdoorsy.' But I do believe people have an inherent and necessary connection to nature. So I'm not surprised by this love of and interest in the natural world.

Yvonne: I think with non-fiction it's very much a case of finding the sort of subjects that interest you, or the authors, and I'm very particular with what I pick up. An awful lot of non-fiction would just not engage me.

Yes, we're in the second category too, a nice stroll along a promenade or NT place and it must include an ice-cream!

Not a big zoo fan either, never have been to be honest so haven't been to loads, just a few when the girls were young. I do think they do good work as regards breeding programmes though and they do introduce children to the world of animals and conservation. It's a difficult subject.

Margaret: Oh gosh, ants in the house is horrible. We've mainly been fortunate and not had them apart from our house in Minehead. I remember one summer when Peter was in and out of hospital with heart problems for weeks on end (2001 I think). I came back from one emergency trip to find our entire bay window crawling with the wretched things. It was almost too much to be honest, I nearly burst into tears.

That mugginess on Thursday was awful, thank goodness it's completely gone now.

Margot: No problem at all, it's nice of you to take the time to comment on my meanderings.

Yes, I very much have my limits when it comes to being outdoorsy. I like the sound of it but the reality is I have 69 year old hips and knees and while the spirit might be willing the joints definitely are not. I do however like reading about it and this was a particularly good insight into the world of bird and nature watching in the UK.

Hi Cath,
I found myself smiling and laughing all through this excellent, actually brilliant little essay about this book! It was very entertaining, and I'm sure the book will be the same. Thanks!

Hi Judith, glad you enjoyed my review. The book is so much more than my review to be honest and I can't praise it highly enough.

I'm catching up on some things and had to comment here because of course you made me add this book to my latest TBR list. It sounds excellent, but sadly like many UK-published books, my library doesn't have a copy so I'll have to hope to find it somewhere else someday.

Jeane: What a pity we're not neighbours as you could borrow mine. Hopefully you might be lucky and come across it at some stage.