Continuing with my murder mystery binge reading, Killing Trail by Margaret Mizushima is book 1 of her 'Timber Creek K-9' crime series. I'm fairly certain I read about it on Lark's blog ( Lark Writes... on books and life ), it's likely as we have such similar reading tastes but it could've been someone else, apologies if it was. 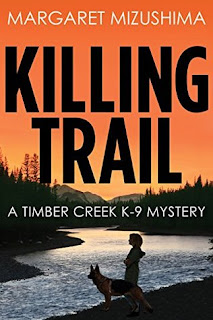 Soooo, this series is set in the mountains of Colorado in a small town named Timber Creek. Cop, Mattie Cobb, is newly qualified as a dog handler and the local police now has 'Robo', a German Shepherd on its force. They're still learning though, the two of them, and there is jealousy from another officer who thought he was going to win the covetted role and him being her superior makes life tricky.

Mattie and Robo's first murder case involves a teenage girl found half-buried in the forest. Her beloved dog, Belle, is guarding the body but is also injured herself with a bullet wound. The local vet is Cole Walker, newly divorced with two daughters one of whom was friends with the murdered girl, Grace. Mattie and the prickly female detective brought in to investigate need to know more about Grace. Was she into drugs perhaps, as that problem in Timber Creek has definitely become more pronounced of late and someone is definitely running drugs. But Grace was not into that scene, so what's going on?

Well, this was another murder mystery that I found hard to put down. As is sometimes the case with me I had the perpetrator top of my list of suspects almost from the start. I didn't know if I was right though so it didn't matter. The setting here is gorgeous, lots of forests and mountains, rivers, walking trails and, well, you get the picture. It's idyllic but everyday life in these wonderful spots is not always what it's cracked up to be. They have exactly the same problems as we who live in more mundane areas, poverty, abuse, drugs, you name it.

I liked Mattie a lot, I groaned a bit that she was yet another main character with a troubled childhood but that seems to be par for the course these days and you wouldn't read anything at all if you ruled out all such books. I loved how devoted she is to Robo, determined to be a good dog handler, and cheered for her as she proved his (and her) worth to her colleagues. To be honest, the dog is pretty much the star of the show. LOL! I amuse myself as I don't own a dog, prefer cats really, but boy do I love a K-9 murder novel (The Search - Nora Roberts, Mercy Carr and Elvis by Paula Munier, Chet and Bernie by Spencer Quinn).

There is obvious romance on the horizon for Mattie although it will clearly not be straightforward. That's fine, I don't mind a bit of complicated relationship stuff as long as it doesn't overpower what is essentially a murder mystery series. And I don't think it will.

All in all, a great start, this was published in 2015 I believe and there are now seven books in the series. I've already bought the next two, and this first book is only 99p on AmazonUK at the moment.

I really like dog mysteries so will have to try this!

I have the new/fourth Paula Munier but must do some errands and gardening today first. Enjoyed Miss Austen but so sad!

You really seemed to enjoy this one Cath. It does sound good but, no new series for me unless it's #1 or 2 possibly. I still have half or more of Louise Penny to go and I jumped around as well so not even sure what I have left. BTW - I love all animals but, cats rule or dogs with me.

I'm glad you're enjoying your foray into crime fiction, Cath. This is one of those series that I think has substance and a a solid crime story to it without being gory and violent. I like that about it, and the setting.

I'm so glad you liked this one. Robo is amazing! He's my favorite character, with Mattie and Cole close seconds. And honestly, I think this series gets better with each book. I've read and loved them all. :D

Constance: I think it's worth a look especially as it's so cheap at the moment.

I haven't got the latest Paula Munier, my next is book 3 I think. Looking forward to that. Yes, Miss Austen is quite sad but so well written. I plan to get Godmersham Park soon.

Diane: I seem to have given up trying to control how many series I have on the go. I know it's getting ridiculous. I need to get back to Gamache, possibly this autumn.

Margot: Yes, my favourite type of crime series are the non-gory and not too violent. I tend to think you can write a good story without including every gory detail.

Lark: Ah, I thought it was you where I saw this book. Robo is fantastic! Mind, I always love the dog in these K-9 series. LOL I'm so pleased to hear the books get better and better, I'll be reading book 2 in the autumn I think.

Definitely a series where, like yourself, I would need to read book #1 first, just to get as much background on the characters as possible. Not really a reader of this type of series just because of the animals, but well worth checking out nonetheless! :)

Hi Yvonne. I'm a bit pedantic when it comes to book series and always try to start at the beginning. With modern series anyway. With vintage crime series it tends not to make as much difference so I don't worry about them so much. Strangely, I wouldn't have called myself a reader of this kind of book either as I'm not a huge animal lover, I like them, but not in an obsessive manner. So why I like these dog stories I don't know, possibly the Colorado setting was as much of a draw as the dog!

Hope you're not melting in the heat. Horrendous, hopefully they're right and this week will see an end to it. I'm already thinking about autumn books. LOL

I had been thinking of trying the first book in Paula Munier's series sometime soon, but this would be another possibility. I will look for books by both authors at the annual book sale in the middle of September... not that long to wait.

Tracy: Yes, that's a good series too! I think possibly what attracts me so much is not just the K-9 theme but also that these series tend be set in interesting parts of the USA. I'm always attracted by books set all over your beautiful country. So envious of your book sale!

I just finished The Coffin Trail by Martin Edwards which I liked very much but can't remember who recommended this series but surely it must have been you or Tracy.

The two main characters clearly do not belong with the people they are with but he's got a whole series to figure that out and get them together.

Constance: Well I've read quite a few in that Lake District series so it could've been me, although not in a while so it might not have been. The mysteries are very good and so is the writing, but after a few books that relationship doesn't really move on and it needs to.

Constance: I bet it was Judith at Reader in the Wilderness. She has been reading a lot of those recently and likes them a lot.

I have only read the first one; plan to read the second one someday, maybe soon.