So, people have been telling me for years that I must read something by Rosamunde Pilcher. I don't just mean one person, I mean more in the order of 'multitudes'... hordes of folk, horrified that I haven't read a single book by her. And I have meant to. The Shell Seekers has been off the shelf, onto the tbr pile, and back again more times than Imelda Marcos changed her shoes. It's shaming really. BUT, I have at long last put that right and I have read Winter Solstice. (And just look at this fab cover!) 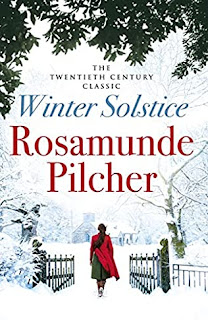 Retired actress, Elfrida Phipps, has moved to Hampshire from London. It's a big step for her, buying her own house and moving to a small village on her own after losing someone close to her. Luckily, the locals in the village are friendly and welcoming and she soon becomes close friends with the Blundells, Oscar, Gloria and their 12 year old daughter, Francesca. Then comes tragedy. Elfrida is away in Cornwall when it happens and knows nothing until she gets back. Life for Oscar Blundell has changed irrevocably and he turns to Elfrida for help.

Carrie is back in London after quite a few years working in the skiing industry in Austria. She's trying to work through a loss of another kind but does not want to talk about it with anyone, including her selfish mother, Dodie, or likewise selfish sister, Nicola. Nicola has a daughter, Lucy, aged 14, and there's a problem. Christmas is looming and Nicola wants to go Florida with the new man in her life. Dodie is going to Bournemouth for the holiday and does not want Lucy along. Carrie steps in and makes plans for her and Lucy. She calls her older cousin Eldfrida... who is in Scotland with Oscar Blundell, in a large house half-owned by him.

Sam, who has been in NewYork for 6 years, married there and then separated, is moved to Scotland with his firm to rescue a failed woollen mill.  He's met 'Hugh' at a dinner party in London. Hugh owns half a house in the coastal Highlands of Scotland, with Oscar Blundell, but wants to sell it. He thinks it might be the perfect place for Sam as it's close to the factory. Sam, of course has no idea that the house is now occupied.

As is the way with this kind of tale, all of these various lives and stories meet and merge and there's an outcome, but not before you have learned to love them all, Elfrida, Oscar, Carrie, Lucy and Sam. We have a story here about family, friendship, grief and recovery... or at least an acceptence of loss in that life will never be the same but can still be wonderful again given time, help and encouragement.

This is also a story about a house and how it can have a personality of its own. We all know this. How often have we been house hunting, despairing of ever finding the right place, and then walked into 'the next one on the list' and thought immediately, 'This is it'. Four times that's happened to me and I've never been wrong. The house in this book is known simply as The Estate House and is a rambling Victorian pile the bones of which are fine but which needs a lot of tlc inside. Oscar and Elfrida move in and love it immediately. But they're rattling around in it, so when Carrie and Lucy arrive for Christmas, Elfrida is delighted. She's one of these wonderful easy-going 'what will be, will be' kind of people who just get on with welcoming people and being lovely. I adored her.

There is not a huge amount of plot or action in this book so if that's your drug of choice this might not be your fix. It's really 500 pages of character-driven meanderings and thoughts and the delightfulness of an isolated Scottish village and its inhabitants as winter hits and Christmas approaches. (Inverness was an hour and a quarter by car and I tried to decide where the village was, I decided in the end that it was out near Ullapool but it could easily have been in several other directions.) I loved its gentleness and humanity to bits and now realise why the world and his mother-in-law wanted me to read Rosamunde Pilcher.

I have only ever read a few of Rosamunde's early books (those which she wrote under her own name, as she also wrote as Jane Fraser), and that was long before I ever began blogging or reviewing. To be able to catch up with reviews of those books, would I fear, mean re-reads of them all, which with the best will in the world, isn't going to happen. It will therefore have to suffice to say that I enjoyed all those titles I read, and I shall add 'Winter Solstice' to my wish list!

I find it quite frustrating when authors choose fictitious place names for their books, whilst chatting about other surrounding areas in 'real time'. Sometimes I am in the mood to try and work out the identity puzzle of a location with the clues I have, but not always.

I'm pleased that one of Rosamunde's books finally made it to the top of your TBR pile :)

Wonderfully expressed. I'm afraid The Shell Seekers is crying out for you....!

I love this book! But then I've loved every Rosamunde Pilcher book that I've read. I'm glad you finally got a taste of her books. They're so lovely and comforting. :D

I'm so glad that Winter Solstice was not a disappointment! Maybe there should be a club of Winter Solstice fans--or Rosamunde Pilcher fans. I would join both! I read The Shell Seekers in early May 2021. The emotional highs and lows of that novel mirror those in real life. Wonderful!

Now that you have shared your thoughts on this book, I will have to find a copy and read it. I have been curious about her books for a while. Probably not for this Winter Solstice, but that would be perfect. I want to find a copy at the book store so I can check the print size. If I am going to read 500 pages, I want it to be a comfortable read.

Yvonne: Yes, I think she wrote quite a lot of shorter books to start off with and then progressed to these longer, much beloved books, that people adore so much. I'm looking forward to reading a few more.

I wish authors would give a few more clues to where their towns and villages are. This could've been west of Inverness, which was my guess, north or east. I guessed it was not south as that would be past Loch Ness and Fort William and those places were not mentioned at all.

Anonymous: (Sorry, I don't know who you are.) Thank you. Yes, I can hear The Shell Seekers whispering my name on the shelf behind me...

Lark: Yes, there was a wonderful atmosphere of comfort throughout the book, so I'll definitely be looking for more. The Shell Seekers of course but also 'September' I think.

Judith: No, Winter Solstice was definitely not a disappointment. I didn't expect it to be to be honest, with so many people, such as yourself, recommending them. I would join a club for her books too, there may be one on Goodreads, I must look.

Tracy: Print size is a real problem as we get older. I started Following the Equator by Mark Twain but the print size in my softback book is 'tiny' so I had to give up and read it on my KF. I read Winter Solstice on that too and although it is 500 pages it seemed to fly by.

I'm so glad you enjoyed this one, Cath. Sometimes those stories where we see relationships and characters unfolding can be excellent, especially as we follow the characters over some time. It's interesting, too, to see what happens when characters' lives intersect.

Margot: Yes, it's always interesting to see how author's handle the merging of lots of people's lives. The reader gets that, 'Oh, I see' moment and that's always fun.

I've been threatening to run away to an isolated Scottish village lately, so I should definitely read this book :) Glad you enjoyed it so much. And, yes, houses definitely have their own personalities. I've heard real estate agents say you know when a house is going to work for you and I've definitely had that experience as well.

Susan: Oh, I think if you decided to run away to an isolated Scottish village a lot of us would come with you. LOL! Yes, me too with houses. I always know when a house is 'right' for us.