Two books that feature letters today. I'm a bit behind with the Postal reading challenge I'm doing so these two books will get me caught up to where I should be almost halfway through the year.

First, More Than Love Letters by Rosy Thornton. This is an epistolary novel and therefore qualifies as my book three for the Postal Reading Challenge 2014 which is being hosted by The Indextrious Reader. 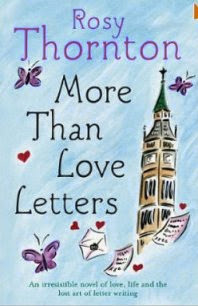 Primary school teacher, Margaret Hayton, is a young woman who likes causes. Writing often to her Labour MP, Richard Slater, about various issues - VAT on women's sanitary protection, dog fowling in public parks and so on - all she ever gets in reply is a stock letter. Eventually Richard decides to meet Margaret in one of his constituency surgeries and is shocked to discover that she's not a middle-aged harpy, but a pretty young woman in her twenties. Richard is a trifle shallow. His main aim is to climb out of his back-bench position and get a ministerial post. But getting to know Margaret changes his outlook on life. Margaret volunteers at a local women's refuge, she puts her money where her mouth is on various serious issues and puts Richard's shallowness to shame. Somehow or other he finds himself falling for her but will his newly found enthusiasm for Margaret's causes help him rise to the top of the Westminster ladder... or not?

I think this was Rosy Thornton's first book. I've read a several of her others and enjoyed them very much, particularly Tapestry of Love. More Than Love Letters is easily up with that in the enjoyment stakes, albeit a very different kind of book. It's actually an epistolary novel but as I find it hard to get my mouth around that, let's just say it's a book written in letter form. And boy does it work!

It deals with some serious issues in fact... the abuse of women and the running of women's shelters is its main theme but Margaret has a grandmother who has had a stroke and is trying to remain independent in her own home, and this features rather a lot too. What Rosy Thornton does though is very clever in that she writes about these very serious issues in a way that doesn't depress you. She uses humour with a very deft stroke and it's terribly effective. I laughed endlessly at the WITCH (Women of Ipswich Together Combating Homelessness) minutes of the meetings, at the school newsletters... I'm guessing the author has personal experience of some of the teaching details... and so on. I loved Margaret herself, a delightful character, very genuine and caring. Whether Richard was worthy of her I couldn't really decide, and the only thing which didn't ring true to me was whether he would say quite as much as he did about his intimate feelings in emails to another MP, albeit his best mate. But that aside, I found this book of letters and emails to be a really excellent, fun read, a pageturner handling delicate issues with humanity and great humour. Very nicely done.

Next up, The Turkish Embassy Letters by Lady Mary Wortley Montagu. This too qualifies for the Postal Reading Challenge 2014 and is my book four. 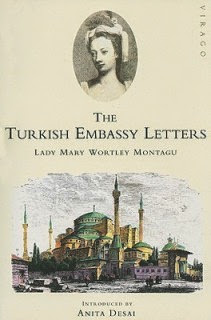 Lady Mary Pierrepont was born in 1689, the daughter of the 5th. Earl of Kingston-upon-Hull. In those days girls didn't get an education but Mary secretly educated herself, teaching herself Latin using her father's library. After a strange courtship (her parents did not approve) she married Edward Wortley Montagu in 1712 and encouraged him to take up a political career. He was elected for parliament in 1715 and Mary joined him in London. She became a popular figure at court but after writing a poem alledgedly criticising Caroline, Princess of Wales, Mary found herself in disgrace. Thus, when Edward was apponted Ambassador to Turkey, Mary was happy to go with him.

They travelled across Europe to Vienna and thus to Istanbul, known then as Constantinople, and all the while Mary kept up a constant correspondence with friends and family. Her sister, 'Mar' was one of her main correspondents, but she also wrote to Alexander Pope, the Abbé Antonio Conti and various other ladies who were presumably close friends. The topics were wide ranging depending on who she was writing to. The manners and customs of the Ottoman empire were a favourite subject, especially the everyday lives of women who were in the higher echelons of society. Her rank as wife of the British ambassador appeared to give her access to many places that previous writers about Turkey could not aspire to and she very much enjoyed putting the record straight about mistakes they had made. She was also interested in the fashions of the country, the beautiful architecture, and the goings on at court. She was not backward in coming forward with her opinions of education for girls, child-bearing, the freedom she felt Turkish women had because of wearing the veil, the beauty of Arab poetry either. While there, she observed the Turkish custom of inocculating the population against small-pox and in fact was the first person to introduce inocculation into Britain.

Mary clearly wasn't without her faults as the introduction stresses, but I found her interesting, intelligent - she learnt the Turkish language so that she could converse properly with the Turks - insightful and brave. I enjoyed this volume of letters but did find it dragged a bit in places. On the other hand, I had to keep reminding myself that this was all taking place in the early 1700s when most women certainly did not get the opportunity to go on these kinds of travels or have these experiences. One of my favourite categories of travel books is that of 'early women travellers' so this was an excellent book for me personally and has spurred me on to find more in this vein.

These both look fascinating in their own very different ways! Thanks for reading along (and for the reminder about the linkup!! It is up now)

wow.. I have a few "letter books" that are not fiction ...maybe after the cataracts are fixed it will also spur me on to read more? who knows lol
I just began my 2rd (newest book) by Alex Grecian. his other two were The Yard and Black Country. Both good books so I hope it holds up for book 3 also!

I have the Rosy T and so look forward to reading it. Sooner than later, I hope.

Pat: Some of these non-fiction 'letter' books are great for letting you really get to know the person.

Nan: I hope you enjoy it as much as I did.

I like the look of that Turkish embassy book. One that I doubt I would have come across if not seeing it here.

Would love to read More Than Love Letters!

Thomas: I suppose it is a slightly unusual. It's a Virago travel book which I picked up in a charity shop. I always grab anything I see like this that's a bit unusual and have been lucky to discover some interesting finds.

Peggy: I think More Than Love Letters is one you might enjoy.

Catching up on blog posts ...and as I'm tired and it's raining and ebooks make temptation difficult to resist I've splurged on The Moving Toyshop and More than love letters... you temptress you ..lol Loved the Letters and have started and am enjoying the Toyshop!
Thank you!!!!

My pleasure, Val. Glad you liked the letters and are enjoying Toyshop. I thought that was huge fun. LOL... I don't often get called a temptress. ;-)