Last year, or possibly the year before, I read Miss Buncle's Book by D.E. Stevenson. I thought it was delightful, had a quick look to see what else she'd written and then... well nothing. I didn't do anything more about reading more books by her and I'm not sure why. Distracted by something else I expect. What I didn't realise was that the author was Scottish. In fact, her father was David Stevenson, the lighthouse engineer, and he was first cousin to Robert Louis Stevenson, the author. So not just Scottish but quite 'distinguished' Scottish, a very famous - and talented - family.

Anyway, all that said, a recent random grab from the large print section my local library was The Fair Miss Fortune by D.E. Stevenson. 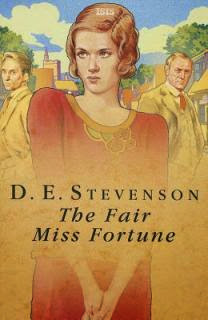 Captain Charles Weatherby is home on extended leave from the army in India. He's been sent to a drinks party by his mother, even though he would really rather not go as he feels he's rather lost touch with all of his previous village friends. He's welcomed in by a childhood friend, Harold Prescott, whose new home is the venue for the party. Harold lives with his mother but has never left home, except that he and his mother moved from their cottage recently because of a new road being built. Charles discovers that the Prescotts' old cottage has been bought by a young lady, a Miss Jane Fortune, who plans to open tea rooms in the old place.

Eventually Charles meets her and ends up offering to help her knock the garden into shape so that she can use it for extra space for tables and chairs. He soon falls in love with the beautiful Jane. Unfortunately it isn't long before Harold Prescott also meets Jane and finds himself falling for her charms. But something isn't quite right. Jane acts in a very odd manner... encouraging one or the other and even, on occasion, seeming not to recognise either of them. What on earth is going on?

I think this could best be described as a charming romance. It reminded me strongly of the kind of story you used to come across in women's magazines like Woman's Realm or Woman's Weekly, back in the sixties and seventies. Except that there is a bit more to this as the writing is exquisite and the plot is quite convoluted. There is also a lovely vein of humour running through the story, mainly associated with some spot-on observations of how people behave. Rampant gossiping and subsequent exaggeration and the trouble that enues for instance. There's one family that never stops rowing and even continues to do so when they have visitors. And Harold's awful mother is drawn with great skill and keen insight. I liked the twist... which the reader knows about of course but the characters in the story do not.

The whole thing was just a joy to be honest. An easy going, charming sort of comedy of manners. I gather it was not published in the 1930s because it was considered too old-fashioned. Bizarre. To me it felt very 1950s so how they could have thought it was old-fashioned in the 1930s is beyond me. But anyway, it looks like it had to wait for 2011 to be published... I think I even read somewhere that it was rediscovered in an attic, though I may well have dreamt that. And now I really will see what else I can find to read by D.E. Stevenson and actually read it.

The Fair Miss Fortune is my book seven for Peggy's Read Scotland 2014 challenge.

I haven't read any of D E Stevenson's books. This one sounds good, although you did put me off a bit comparing it to women's magazine stories, but I did enjoy reading those in my mum's magazines!

I think I'll have a look at her books. Checking the local library catalogue my branch doesn't have any copies, so I'll check out the secondhand bookshops.

TFMF was indeed one of the manuscripts discovered in an attic & published by Greyladies in Edinburgh over the last few years. If you enjoyed Miss Buncle, there are two sequels, Miss Buncle Married & The Two Mrs Abbotts. DES wrote over 40 novels. I discovered her a few years ago & have read about half of them. TFMF is definitely one of her lighter stories but very enjoyable.

i love when we find a book by an author that we weren't even looking for! I am glad that you are liking all the books you read. I haven't found those rare exceptional ones lately..but I know they are out there!

Margaret: It was a good book. I didn't intend that the women's magazine comment should sound derogatory as I always loved those stories when I was younger. Once upon a time if you wanted to take up writing the advice was that you submitted stories to women's weekly or monthly magazines first and I've heard that some famous authors got their start that way. Your library might have other books by her... Miss Buncle's Book is a well-known one and Mrs. Tim of the Regiment, which I've not read but a lot of people seem to like.

Lyn: Thankyou, I *thought* I'd read that somewhere but wasn't sure. I'll see if I can find the sequels to MBB somewhere.

Pat: I've been reading a lot of good books this year, but not so many exceptional ones. I suppose that's the way it goes, it wouldn't be such a good thing if every book was wonderful. LOL

So many love her writing! I have 3 of her books I think and will read one this year. I did not know she was related to the lighthouse Stevensons!

Peggy: Yes, a lot of people seem to. They were one very talented family!