As usual I'm behind again with my book reviews. I've been reading a lot this week and thus am three books behind! Time for yet another set of three shortish book reviews.

First up, Alanna: The First Adventure by Tamora Pierce. This YA fantasy is my book seven for Carl's Once Upon a Time VIII challenge and my book twenty for Bev's Mount TBR challenge. 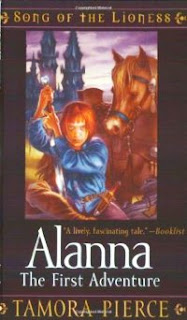 Alanna and Thom, both of Trebond, are identical twins. The usual thing when children are of an age is that girls go to learn magic and boys go to train to be knights. But Alanna is not interested in magic even though she has the gift of healing. And the last thing Thom wants is to be a knight. Both want what the other is supposed to have... so, daringly, they swap places. Alanna pretends to be a boy and heads off to the castle of King Roald to start her training as a knight. It's an uphill struggle. She's small for her age so has to work harder than the others and there are many petty rules and regulations with punishments that seem never ending. Alanna makes some good friends... and enemies. There will be things that test her to the very limit of her experience and training. Will she survive to fulfill her ambition of being a female knight?

Alanna: The First Adventuere is book one of the author's 'Song of the Lioness' series. This Young Adult book is aimed at the younger end of the genre, say ten to fourteen year olds, but is a book 'anyone' can enjoy. I fair galloped through it as it's nicely written, a pageturner, and huge fun. I've never read anything by Tamora Pierce before but have heard quite a lot about her. It seems she is beloved of the generation who were of an age to read this when it was first published in 1983. I know I would have loved it if I'd read it as a child as there is a lot about it to love. Alanna is a terrific character, honourable and full of pluck and the fantasy universe Pierce has created is an interesting one. There are three more books in the 'Song of the Lioness' series which I do not, as yet, own but plan to at some stage. This may be a book for young adults but it's a fun read for all and I really want to find out what happens to Alanna.

Next, The Moving Toyshop by Edmund Crispin. This is my book twelve for Bev's Vintage Mystery Bingo challenge and covers the category, 'A Locked Room Mystery'. 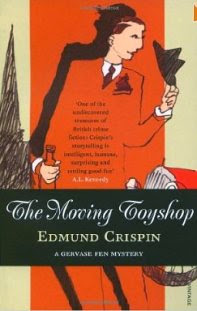 Poet, Richard Cadogan, feels in need of a holiday, a complete break, perhaps some adventure. On a whim he gets on a train to Oxford where he was a student. He arrives late at night with nowhere to stay and wanders around. Seeing a toyshop he tries the door, finds it surprisingly open and goes in. Upstairs he finds the dead body of an elderly woman, strangled with a wire. Suddenly hearing a noise he, too late, realises the danger he might be in as he is hit from behind and knocked unconscious. Recovering consciousness he escapes via a window. Returning with the police in the morning they find that the toyshop is now a grocery shop and there is no sign of any body: the police are of course doubtful about the poet's story. Cadogan enlists the help of Professor Gervase Fen, who was a friend in their student days, and together they attempt to solve this unsolvable mystery.

I think this is what's known as a 'locked room' mystery - an impossible crime which takes place in a locked room where none of the obvious suspects could have done the deed. It's my first Gervase Fen book but not the first book in the nine part series, The Moving Toyshop is actually book three. The story itself is a bit mad and really very funny. On the back of the book it says, 'the bookish duo rampage through the university town determined to find the answers' and that's exactly what happens. At times it's totally farcical as they pick complete strangers up to help them with their investigations, get kidnapped, chase suspects through male-only swimming areas where the men swim naked, go careering dangerously around in Fen's car because he's such a terrible driver and so on. The madness is endless... and absolutely hilarious. Crispin was a wonderfully humorous writer and I really did laugh my way through this wonderful book. I can't wait to read more now. I've owned the very last book in the series, Glimpses of the Moon, for years but never read it, realising it might be better to start with an earlier book. I now have three others to read, two grabbed from the library and one bought. So thrilled to have discovered yet another brilliant vintage crime author to read.

Lastly, Death in the Clouds by Agatha Christie. This book qualifies for Bev's Vintage Mystery Bingo challenge and covers the category, 'A book that involves a method of transportation'. 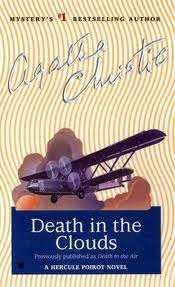 Hercule Poirot hates flying. He hates it to such a degree that he wraps himself up in loads of clothes and tries to sleep through the whole journey. Which is rather unfortunate on a particular flight from Paris to England because when he wakes up he finds a murder has been committed. A French woman has been killed... at first it's thought by a wasp, because of the mark on her neck, but then a South-American native blow-pipe is discovered and assumed to be the weapon used. The suspects are limited and Poirot and Inspector Japp can see no motive for the killing from any of them. Things clearly need further investigation because as Poirot observes - *everyone* has secrets. And so it turns out to be...

Hard to believe but this is the very first Poirot novel I've ever read. Naturally I've seen just about every TV drama, starring the brilliant David Suchet, that was ever made... although oddly I don't remember Death in the Clouds at all and am wondering if they ever made it. I'll have to look it up. Anyway, it was so easy to read this with the voices and images of the main actors in mind and that made it even more fun. It really was a very enjoyable read, beautifully written, nicely amusing, quite complicated, and with a little romance thrown in. It was so full of twists I totally failed to guess the culprit and got taken completely by surprise at the denouement. One of those 'Oh' moments. LOL. I read some Agatha Christie as a teenager and a couple of standalone books several years ago which didn't really do a lot for me, but this Poirot has really surprised me with its excellence. Thoroughly enjoyable. I'll definitely be reading a lot more Poirot and perhaps some Miss Marple as the year progresses.

You're reading really quickly! A lot of my reading time is now taken up with the garden, when I would very much prefer to be reading!!

I'm not sure I'm in the mood for farcical crime fiction right now - maybe another time ...

I'm glad you enjoyed Death in the Clouds - I enjoyed it a lot too. It's a sort of 'locked room' mystery too, with all the suspects on the plane.

Yes, if you've never read Poirot or Miss Marple, you have a lot of good reading ahead!

I absolutely adore Gervase Fen! Glimpses of the Moon is superb, and has a Devon setting as a bonus. I think you will like it :-)

The Tamora Pierce book sounds interesting, I shall add the series to my interminable lists!

oh my... you are off and running again lol...I can't see the name "miss Marple" without thinking of the movie "Murder by Death" with Truman Capote..miss Marple was played by Elsa Lanchester and was hysterically funny.

Margaret: I am reading quickly but can't decide if this is because I've become a quicker reader or that the books I'm reading are easy reads. A bit of both perhaps.

Yes, it did seem to me that Death in the Clouds was also a locked room mystery.

Carol: Yes, I think I might indeed have heaps of good reading ahead.

Geranium Cat: I think I adore Gervase Fen too. Certainly The Moving Toyshop is one of the best crime books I've read this year. Ah yes, I'd forgotten that Glimpses of the Moon is set in Devon, looking forward to that one. In the meantime I have three others to read.

I was quite taken with Tamora Pierce.

Pat: Now that movie, Murder by Death, is quite new to me. Will keep an eye out for it.

So glad you enjoyed "The Moving Toyshop." Most of the other Crispins are equally good or (in my opinion) even better; I'm particularly fond of "Swan Song," and recommend it heartily. Oh, and welcome to the long list of Agatha Christie fans as well!

Les: I was wondering if I might have read the best book first and the others might not be quite as good. I'm rather relieved to hear that you think the rest are just as good, if not better. I have four more to read: Love Lies Bleeding, Glimpses of the Moon, Buried for Pleasure and Holy Disorders. I'll certainly make sure that I also read Swan Song.

Oh oh oh! Your first Tamora Pierce! And you started in the perfect place--I've read all of her books and the Song of the Lioness is still my favorite. And the books just get better throughout the quartet. Alanna is such a wonderful character. As a unit, I count the quartet among my top 5 favorite books ever!

marveloustales: Yes my very first Tamora Pierce and I really enjoyed it. Hoping to get hold of the next three books very soon so I can find out what happens to Alanna.