I've been doing very little most of this week, apart from reading, due to a fall I took in our backyard last Sunday. Thank goodness for books or I'd have gone a bit mad with boredom. As it was I read three excellent books...

First up, Out of the Deep I Cry by Julia Spencer-Fleming. This is my book 22 for Bev's Mount TBR 2014 reading challenge. 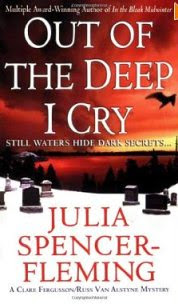 In April 1930 Jonathon Ketcham went missing. He and his wife, Jane, had lost their farm when a dam was created and not long after their four children had died of diptheria. Jane had reported him missing but the police had never been able to find out what had happened to him. Some years later his wife founded a hospital for the poor in his name. Fast forward to Spring in the early 21st. century and the doctor who runs the hospital has gone missing. Chief suspect is a single mother who has concerns about the safety of vacinations, believing they are the cause of her son's autism. She was the last to see him alive but chief of police, Russ Van Alstyne, is not convinced of her guilt. Reverand Clare Fergusson sets about investigating the disappearance of Jonathon Ketchum via historical records, wondering if the two disappearances are connected. She has no idea of the can of worms she is about to open...

This is the third book in Julia Spencer-Fleming's Clare Fergusson/Russ Van Alstyne series of books. I enjoyed the first two books but I absolutely *loved* this one. Chapters are entitled 'Now' or 'Then' indicating that they deal either with the historical end of the plot or the modern day, and I found this worked extremely well. Both stories were fascinating and the two plotlines interwoven very skilfully indeed. I learnt the terrible toll diptheria took on families before the advent of vacinations. And even once those were established how frightened people were of the process of inoculation and had to be persuaded by doctors to have their children done. I had no idea and also knew very little about the horrors of diptheria, being a child of the fifties and sixties when vacinations against such diseases were commonly accepted and given as a matter of course.

Clare and Russ are two of my absolute favourite crime solving pairs. The background story of their relationship I find rivetting and not a little heart-breaking. I like reading about them as much as I enjoy the actual mystery elements of the books. I also love the New York state setting. I've been lucky enough to go there and the descriptions are spot on... it's so nice to be reminded of this beautiful area and it makes me long to return. I'm so happy that there are another five books in this series to read.

Next, Up With the Larks by Tessa Hainsworth. This non-fiction is my book 23 for Bev's Mount TBR 2014 challenge and my book 5 for the Postal Reading challenge which is being hosted by the Indextrious Reader. 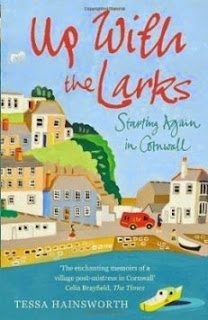 Tessa Hainsworth, her husband, Ben, and their two children live in London. She has a well paid job with The Body Shop and her husband is an actor who has given up his career to look after the children. Tessa's job is very demanding and she realises one day that she hardly sees the children or her husband. Something has to give and the decision is made to up sticks and move the family to Cornwall. Naturally, it's not all as simple as it might sound. The house they buy needs a lot more work than they'd previously thought. They need jobs and apply for plenty but neither of them is successful until Tessa hears, by accident, that the Post Office is looking for a new postman. She applies and gets the job but it's a very steep learning curve she's embarked upon. The job sounds simple and straightforward but in fact there are many complications - isolated Cornish folk often like their post left in bizarre places, they're insular and not always welcoming, their pets are frequently a problem... biting dogs and cats and even vicious geese for instance... and that's without the early hours, wet Cornish winters, and weird stuff that people send through the post.

I thoroughly enjoyed this and gobbled it up in a day or so. Being Cornish (although I don't live there and this was a slightly different area to the one I come from) it was interesting to read how others see us. Embarrassing at times too... the insularity made me roll my eyes quite a lot as I know it's all true. But what comes over very strongly is how much in love with the Cornish countryside and coast the author is. Beautiful descriptions of both made me feel quite homesick. I also really enjoyed reading about the day to day business of being a postwoman. Very interesting, hilarious at times, and damned hard work! The couple's struggle made for a very absorbing read and I plan to get hold of the sequel, Seagulls in the Attic, from the library at some stage.

Lastly, Holy Disorders by Edmund Crispin. I read this for Bev's Vintage Mystery Bingo challenge and it covers the category 'A book by an author with a pseudonym' as Edmund Crispin's real name was Bruce Montgomery. 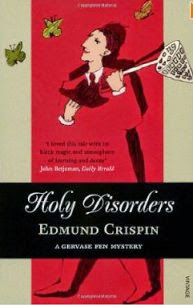 Composer of church music, Geoffrey Vintner, receives an urgent request from friend, Gervase Fen, to come immediately to Tolnbridge in Devon. It seems the organist of the local cathedral has been assaulted and left in the cathedral overnight and was driven mad by the experience. Vintner is needed to take his place, and by the way could he bring a butterfly net with him? Reluctantly Vintner sets off and in the space of a few hours survives three attempts on his life. The church organist dies in hospital and it's not long before another death occurs in the cathedral. Fen, Vintner, a police inspector and sundry other individuals try their utmost to solve this impossible case which seems to involve espionage, Nazis, a raven, moths and butterflies... and even witchcraft.

Another outing with eccentric English professor, Gervase Fen, and whoever he manages to pick up along the way. Fen himself doesn't actually appear until well into the story and the book is as much about Geoffrey Vintner, a middle-aged, unlikely hero, who falls in love at first sight with a beautiful girl, as it is about Fen himself. And it's none the worse for that either. As usual the tale is peopled with eccentric characters and this time they're mainly members of the clergy attached to the cathedral. Fen, as usual, has developed some mad obsession and on this occasion it's moths and butterflies that he bores everyone to death with. There's a lot of action, a lot of humour, a bit of romance, and some nicely described Devon scenery. Not bad at all but possibly not quite as good as The Moving Toyshop or Buried for Pleasure. A joyous series of vintage crime books though and I plan to read them all.

laid up or not I could not read so many books so fast lol...if you stick to your tbr pile it will be gone by the end of the year!!!!

very glad they are so enjoyable..it's pretty nice that people write books for us eh?!! lolxoxoxox glad you are feeling better!

Thank goodness you had some good books to read!!!

Pat: Oh God, I wish. No way would my tbr pile be gone by the end of the year. LOL!

Yep, so nice of wonderful folk to sit and write great books.

My shoulders and upper back are still not great after my fall. I think I'm going to end up at the drs but am resisting.

Margaret: Well quite! One excuse for keeping the shelves well stocked...

I hope that you are feeling better. Sorry to read of your fall.
I always learn of such interesting, intriguing books from you Cath. Up With the Larks sound right up my alley right now. Will look it up soon.

So pleased you find my book choices interesting and intriguing. :-)

You have been reading some good books, Cath. I am so sorry about your fall and your recurrence of your neck injury. I'm happy you can still read, with it! I have moved up my first Julia Spencer-Fleming book to read in the coming weeks now because of your reviews in this series!!

I will be back on my blog this weekend :-) I have been busy reading and watching World Cup Soccer this month. I miss blogging, which is good news for my blog! Take care, hope you feel better very soon.

Hi Susan! Funny, I had a quick check on your blog last night to see if I had missed any new posts (it happens) and this morning here you are. So pleased you'll be doing an update soon. Though of course I do see you every day on FB. :-)

Thanks for your commiserations, the discomfort seems to come and go so I take one day at a time.

Oh yes... goodness... you must read JS-F, Susan. I honestly think you would love her books. This third one was the best so far, imo.