Naturally at this time of year things are a little busy. I've managed to read a little but am behind on reviewing what I've read. So this is a catch-up post with several really brief reviews, just to get myself up to date.

First up, Recipe for Love by Katie Fforde. 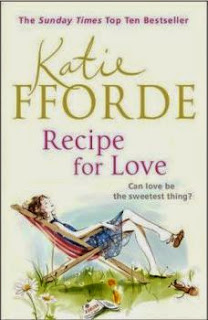 Zoe Harper has won a place on a TV cookery competition, one specialising in baking, (similar I suppose to The Great British Bake Off). On her way to the country house where the competition is to be held Zoe comes across Gideon Irving who has put his car into a ditch. She realises he's a judge for the competition but somehow can't help falling for him over the next few weeks. It's against the rules of course, how can he not be biased if he's involved with a competitor? Zoe's room mate is Cher who is determined to win at all costs. Zoe needs to keep her involvement with Gideon a secret from Zoe, while still concentrating on winning the competition, *and* trying to help out the pregnant couple who own the country house. Could things possibly be more complicated?

Not my favourite, Katie Fforde by any means. I found the idea that a competitor would knowingly jeopardise her position in a cookery competition, a bit far-fetched. And really... no matter how you look at it... it *is* cheating. I don't mind suspending disbelief when reading a romance but this was just plain silly. That said, it got a bit better towards the end and I was glad I'd persevered. Other Katie Ffordes have been much better than this.

Next, Point of Knives by Melissa Scott and Lisa A. Barnet. 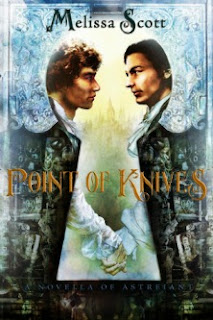 A father and son, suspected of being 'summer-sailors', ie: pirates, are both murdered on the same night and Philip Eslingen is found standing over them. Philip helped Nicholas Rathe solve the mysterious disappearance of over eighty children in Point of Hopes and the two became romantically involved. They then split up when their respective bosses ordered them to because of conflict of interest. Eslingen's innocence is easy to prove but there still remains the question of the two dead men. Philip and Nico join forces once again so solve the murders.

I like this series a lot. Point of Knives is actually a novella sandwiched between the first book, Point of Hopes and book two, Point of Dreams. It's unusual for a fantasy series to focus on a same sex relationship but it makes a refreshing change. This is not an explicit book but the romantic aspect does come more to the fore than in the first book. I enjoyed it very much and liked that aspect of it more than the murder mystery, though that was good as well. I'm now looking forward to reading Point of Dreams early in the New Year.

Next, Once Upon a Christmas by Sarah Morgan. This in my book 35 for Bev's Mount TBR challenge. 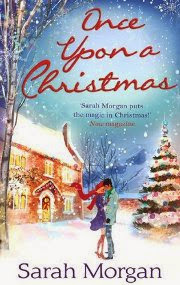 Seven year old Lizzie has written to Santa to request a daddy for Christmas. Her mother, Bryony, is dismayed. She's been in love with Jack, a best friend to her two brothers, for most of her life. Jack treats her like a little sister and will never love her in the way she wants, so it seems she will have to start dating. But Jack's reaction to this is unexpected. He interferes, puts obstacles in her way, is a confounded nuisance in fact, until Bryony is at her wit's end. How will she ever find a dad for Lizzie if Jack continues to behave in this manner?

The answer of course is pretty obvious, as it should be with a Mills and Boon romance. LOL! I won this in a book draw last year and saved it for this Christmas. It's actually two books in one. Part one tells Bryony and Jack's story, part two tells the story of Helen, Bryony's best friend from London, who comes to stay in The Lake District after her fiance runs off with another woman, just weeks before the wedding. I have to say I enjoyed both books quite a lot. The reason for this is that the setting of a snowy Christmas/winter in The Lake District is absolutely delightful. The author clearly knows the area well and also knows about the work of NHS doctors and nurses and especially those who volunteer for mountain rescue work. I found it fascinating to be honest and the romance added a nice touch even though you'd have to be pretty stupid not to know who is going to end up with whom. A perfect read for the time of year.

So that's me caught up. I'm currently reading one of Anne Perry's Victorian Christmas Novellas, A Christmas Hope but doubt it'll be reveiwed now until after Christmas.

You are making want to find that Melissa Scott series, Cath! I've already checked the library for the one you raved about a few weeks ago. Our library doesn't have it :-( so next up, hoping I get an Amazon gift certificate for Xmas so I can order it! lol

I haven't read a Mills and Boon romance in years and years, so it brought back a lot of memories to have you talking about one :-)

In between this and that for Christmas, I seem to be knee deep in all my old Christmasy read, Cath, especially those with short stories and articles. You've given me more books to add to my list here.

Have the Merriest of Christmas, Cath.

It's a crying shame you don't read much Cath..heh..(how's that for sarcastic?!) LOL... I am happy you read something from your tbr pile...but happier that it is not really shrinking! lol

Have yourself a Merry little Christmas!xoxo

Susan: Good luck with finding the Astrient series! It's worth seeking out, imo.

I hadn't read a Mills and Boon in years either. I found them slightly altered in that there was *much* more background info than I was used to way back when. And I'm still thinking about The Lake District setting, so that must've been pretty well done.

Penny: I know, I've found it hard to settle to long or serious books with so much going on.

Thank you, Penny. You too.

LOL, Pat!!! Nope, no sign of the tbr pile shrinking at all. Especially as I asked my daughters for books. LOL

Thanks, Sis. You too.

I love Katie Fforde's book covers! Merry Christmas to you and yours Cath!

Peggy: They 're always fun aren't they?

Thank you... I hope you had a lovely Christmas, Peggy!