The last few books of the year

I have five or six posts that I need to do here and most will have to wait until the New Year because of lack of time at the moment.

Anyway, this will be my final 'review' post of the year and I have three books to do short reviews of. First up, Gone West by Carola Dunn. This is my book 36 for Bev's Mount tbr challenge. 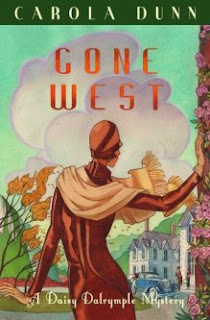 Daisy Dalrymple is heading for The Peak District of Derbyshire to stay with an old school friend. The friend, Sybil Sutherby, is secretary to writer of westerns, Humphrey Birtwhistle, who lives on a very isolated farm with his family. The family include all manner of odd-bods, from his unmarried brother and sister to his American wife and their son, and a pretty cousin and two of her admirers. Sybil has invited Daisy because she thinks there is something sinister going on in the house. She's not sure but she thinks somebody might be trying to do away with Humphrey. Daisy hasn't told her husband, Alec, a Scotland Yard detective, the real reason why she's visiting. Hopefully it will all come to nothing and she won't have to. Hopefully...

Another fun adventure with Daisy Dalrymple sleuthing away in The Peak District this time. It was all a bit Cold Comfort Farm with strange relatives and primitive conditions galore. Very enjoyable and a nice sense of place. Book twenty in the series so I only have one book left to read. Oh woe!

The Amazon blurb: London, 1868. As the Christmas season begins, Claudine Burroughs feels little joy in its endless social calls and extravagant events. Working at a clinic for desperate women has opened her eyes to a different world. Then her two worlds collide. A prostitute smuggled into a grandiose Christmas party is found brutally beaten. Poet Dai Tregarron stands accused. But Dai insists he was trying to protect her from the violence of three young men. Claudine believes him, but with society closing ranks against him, how can she prove his innocence without risking everything?

This wasn't a bad Christmas mystery but sometimes I have trouble connecting with the characters in Anne Perry's books - they don't always feel real. Plus, the situations sometimes feel a bit forced or contrived... and this was one of those occasions. The background stuff was quite interesting, mainly due I think to the fact that anything about Victorian London interests me but otherwise, sorry, a bit pedestrian.

The Amazon blurb: Emily Radley's Christmas plans are shattered when she learns that her aunt is dying. Although estranged from her, Emily decides that she must journey to Susannah's home in Ireland to assist her in her final days. When she reaches Connemara though, it is evident that Susannah has more on her mind than her health. Then Daniel, the lone survivor of a ship wrecked in a violent storm, seeks refuge in Susannah's house. Determined to understand why the village is not welcoming its new arrival, Emily discovers strange parallels with the unsolved death of another young man, Connor, many years before. Susannah, desperate to find out what happened to Connor before she dies, urges Emily to investigate. And as she does, Emily learns that some people will do anything to keep their secrets safe.

I had a very different reaction to this Anne Perry Christmas novella. The characters and their situation felt a bit more real somehow and, more than that, so did the setting. I can only assume the author knows the west coast of Ireland very well because she made it come alive in this story. Fabulous descriptions of the ocean and storms that come in off the Atlantic, the isolated village and wild countryside: wonderful. That alone made me bump my Goodreads rating from a 3 star to a 4.

wow ..you really went hog wild this year with the Daisy Dalrymple series of books!
I've never tried Ann Perry. It seems when some authors write so much there is a book out (or two) every year that they are layed out in such a way that they all begin to sound the same..so many prolific American writers I've never read any of their books.

I am looking forward to your total this year! gads you were forever doing 2 and 3 reviews at a time! you need a few good books that are 800 pages or so to slow you down! lol lol..

btw: Happy New Year to my sis and Peter!!! May it be filled with laughter and good health! x0x0

Pat: I didn't read all 20 Daisy books this year. lol Just a couple. I've been reading them for about 3 years in all.

Yep I need long books so my current book is nearly 600 pages. LOL!

A Happy New Year to you too, Pat.