One of the challenges I've really enjoyed doing this year is Bev's Vintage Mystery Bingo challenge. 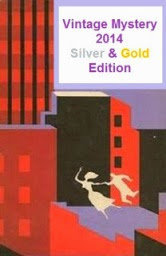 I decided to have a go at the Golden card and for this it was necessary to read books that were published pre-1960. 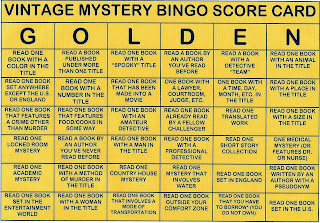 I have to say, it's introduced me to all kinds of authors whose books I'd never read before and sometimes authors I'd never even heard of. I started out wandering all over the golden bingo card, having lots of fun for several months just filling various categories willy-nilly. Eventually I could see several bingo lines that were close to being finished but in all I read 25 books for the challenge and that included 3 bingos. These are they:

Many thanks to Bev for hosting such a thoroughly enjoyable challenge.

This was quite a major commitment for one challenge, but what an achievement!!

I have very few crime fiction books from pre-1960, which is why I didn't attempt this - reluctant to add to my tbr piles! But it certainly looks a worthwhile project for a crime fiction fan. If I could reduce my tbr piles I'd certainly give this a go.

Margaret: Thank you. It was a huge committment but I thoroughly enjoyed it.

You have a point about the tbr pile. Very few of the books I read were previously owned - I read library books or bought books secondhand etc. So, as a way to take books off your tbr pile? Nope, not a good idea.

good grief charlie brown!! Only MY Sis could read that many books so quickly. (well it's quick to me!) Congrats Sis!!..I am going to admit I am smirking that the TBR pile didn't go down all that much LOL

LOL, Pat! I did read them over a year but yeah, I was on a real roll most of this year and read a *lot*. Struggling a bit now due to being busy and not being able to decide what to read.

Nope, this Vintage Mystery challenge didn't help the TBR pile much at all. LOL!

Good job Cath! I failed miserably at this one this year. Pre 60's mysteries are my favorites but I didn't read many this year. didn't even get one bingo.

Great job, Cath! And remember (and this if for you too, Margaret) there's the silver card for books that are a little more recent...maybe that would fit better with the TBR pile?

Peggy: I failed at others but I enjoyed this one a lot so did well with it. I also did quite well at your Scottish one. :-)

Bev: Thanks! It might do, I'll check. To be honest your Mount TBR challenge was the best for that pile even though I didn't climb as high as I'd intended.

Sorry I am seeing this so late. You did great with Bingos and your choices were very good books too.

Thanks, Tracey! I really enjoyed this challenge last year.