An Expert in Murder

Another of the authors my grand-daughter and I saw at our town's Literary Festival was Nicola Upson. She was doing the crime panel with two other authors, Simon Hall and Clare Donoghue. It was a delightful afternoon, all three authors were candid and very funny. There was also the opportunity to buy books by these authors and I came away with the first two Josephine Tey books by Nicola Upson. The first is An Expert in Murder: 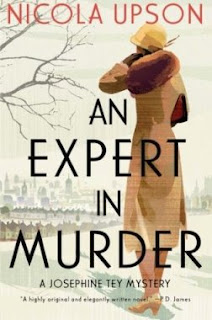 On her way to London from Inverness on the train, author Josephine Tey meets a young woman, Elspeth Simmons. Tey is the author of a play currently enjoying a very successful run in the West End, Richard of Bordeaux. It appears that Elspeth is a huge fan of the play and has already seen it several times. As the play is entering its final week, Elspeth is seeing it one last time, with her boyfriend, who works at the New Theatre where it's being shown.

Josephine and Elspeth get on like a house on fire and Josephine is looking forward to seeing her again later that week. They part on the station platform when Elspeth finds she's left something on the train and goes back for it. It's not until the next day that Josephine discovers from her friend, DI Archie Penrose, that Elspeth was brutally murdered in the railway carriage. A note left at the scene ties the killing to the play, Richard of Bordeaux.

Archie and Josephine set about trying to find the murderer but the plot is very thick indeed. So many people at the theatre had the opportunity but why on earth would anyone want to kill an innocent and charming young girl? Archie is convinced it's a case of mistaken identity and that Josephine was the intended victim. But it turns out to be not that simple and nothing is what is seems in this heartbreaking and complicated case.

When this book was first published back in 2008 I seem to recall seeing various comments about the use of a real person in a fictional book... whether or not it was a bit questionable. I was on the fence about it then and I still am to a certain extent. We're more used to it now of course. Dickens and Wilkie Collins were both used in Drood by Dan Simmons, there's a fantasy series, the name of which escapes me at the moment, that uses a clutch of real authors and so on and so on. On the one hand it does feel a bit odd but on the other... this is actually a very enjoyable book.

I have to admit that theatre based plots are not always my favourite - it's not a world I'm particularly fascinated by and they do tend to have hordes of characters whose identity I have problems keeping tabs on. And this one was no exception, although I did get there in the end. Plus, I do find I have minimal patience with the shenanigans of the acting fraternity. All that prima donna behaviour and no one having the nerve to stand up to them...

To be honest, I think the reason the book was saved for me was Josephine herself who was depicted as a very down to earth, ordinary person and her and the police officer, Archie Penrose, did make rather a good team. The mystery was also rather good and it wasn't until close to the end that I worked out who had done the deed. I had kind of worked out the whys and the wherefores, although it was quite tricky, but not the 'who' exactly. The background of the aftermath of WW1 and the tunnellers was seamlessly interwoven with a 'family secrets' type of plot and is the kind of thing I really enjoy. (Birdsong by Sebastian Faulks is probably the best fictional book I've read on the WW1 tunnelling subject but it does waffle rather a lot.)

All in all a very good read and I'm pleased to have book 2 ready to go. It's Angel with Two Faces and is set in Cornwall, which is a real plus for me, and I do enjoy it when this kind of series gets away from London and into the shires so to speak. Yet another new series for me... exactly what I need! LOL!

I seem to like them all . I do like what I call historical/fiction/mystery.. which would (to me be: Drood). Also Michael Scott who I am in contact with and wrote the six YA books on Nicholas Flamel.. there he used real people/ mythological beeings and his own characters. Any historical parts were not fiction. I do think the more an author can do things like this the more they have put into their writing. (IMO) Anyway.. glad you enjoyed this one! I wish I could write reviews like you do! I count on Amazon for the actual review..when I am done reading a book if I didn't take notes there's not much left as I forget names and places like leaves blow in the wind! I just know when I enjoy something or not.

I've begun a CS Harris "Sebastian St. Cyr Mystery" and quite enjoying it!
But nothing will be a good gothic mystery like 13th Tale where the stars of the story is not a detective! I can't seem to find any like that anymore! If you find any let me know!

I remember reading about this one when it first came out and being interested. However, it went by the wayside, as so many do, not because I didn't want to read it but....so many books. Putting it back on the list. Speaking of 'real' people in mysteries, that sounds like it might be a good theme for my mystery group. Read books that include 'real life' characters. I think there are enough series around to manage it. What do you think?

I read this a few years ago and really liked it. I liked the background of the period - the thirties, showing how World War One which had ended 16 years earlier still cast its shadow. It made me think about mixing fact and fiction by using real people as characters. In this book I think it was maybe a step too far and I would have preferred it if Tey had been wholly a fictional character. But as she is really a minor character in this book it didn't really bother me.

I meant to read more of Nicola Upson's books, but somehow missed reading Angel with Two Faces but I did read the third book, Fear in the Sunlight. I didn't think it was as good as An Expert in Murder with lots of characters that I found confusing. But the description of Portmeirion is very good. This book has Hitchcock as well as Tey - fascinating.

I'm glad you had a good time at the Festival!

Pat: Yep, I was thinking of Michael Scott but also the Imaginarium Geographica (Gawd, that's a mouthful) series by James A. Owen. He uses real authors like H.G. Wells too.

I find it hard to remember details of books too so have to do the review fairly quickly. If I don't, I'm stuffed. LOL!

Have you read any of the Dr. Thomas Bond books by Sarah Pinborough, Pat? I read the first one, Mayhem, set in Victorian times... that was quite gothicky and creepy. Good for RIP in Sept.

Kay: As you say, so many books. It's getting harder and harder to decide which series to devote your reading time to. Especially as you get older and realise you might never be able to read all the books you would like.

I think that would be an excellent theme for a mystery group. The Maggie Hope books for a start... and I think there's a mystery series centred around Jane Austen. Loads more I'm sure... including these Josephine Tey books.

Margaret: Yes, I liked that aspect of the book too. I still can't decide how I really feel about the whole using real people thing though.

I shall definitely read the second book as I own it, and will decide after thak whether or not to continue... possibly get subsequent books from the library.

Thank you, it was a nice experience to have with my grand-daughter.

cath: yup I read James A Owens books too! He's also on my FB friends lol... Strangly enough Mayhem has been on my wish list for a while now! But I seem to be falling into CS Harris books..geez I only need money and to live to 200 to read all my books!

I have at least two of these, maybe more. I want to get to them soon, but that is true of a lot of books on my shelves. I am not too sure about Tey as a character but I do hope I like them.

Pat: Mayhem would definitely be your kind of thing. lol

Tracy: I know... so many books. There's plenty about these books to like despite my reservations.

Did you enjoy Drood? It's a book I happen to have in the house--very thickish, indeed! I'd make the effort if I found someone who found it worthwhile. What did you think of it, if you don't mind sharing?
Judith (Reader in the Wilderness)

Judith: I absolutely loved Drood. But one thing I've learnt about that book is that it's a 'love it or hate it' book. So you may not like it all. Sorry... that's not much help is it?