The Name of the Wind

My seventh and final book for Carl's Once Upon a Time challenge is The Name of the Wind by Patrick Rothfuss. It's also my book fifteen for Bev's Mount TBR 2015. 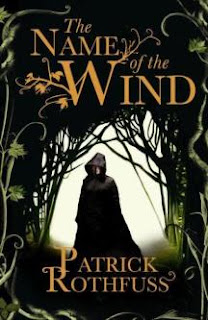 The innkeeper of the Waystone Inn, situated in a very remote forested area, seems like just an ordinary sort of chap. Nothing special, just your run of the mill inkeeper. A writer of stories, the Chronicler, knows better and arrives at the inn hoping to get Kote - alias 'Kvothe' - to tell him his story. He knows that Kvothe is anything *but* ordinary. Eventually Kote agrees but tells Chronicler to set aside three days because his story is a long one.

Kvothe started life in a troupe of travelling actors and singers. Until he was eleven his life was idyllic. Particularly when an arcanist (a sort of wizard, very educated) joins the travellers for a spell. Kvothe is devastated when he leaves but the arcanist has taught him much and left him with a desire to attend the university.

Sadly, Kvothe's life is changed forever, one day, when he strolls into the woods on an errand. It takes a while and on his return his whole troupe, including his parents, have been viciously murdered. The culprits are still there but disappear in front of his eyes. Who or what are they? Kvothe is now a penniless orphan. He makes his way to one of the big cities, Tarbean, and becomes a child beggar, living on his wits, barely surviving. How is he supposed to get to the university this way? Something has to change and eventually it does. He makes it to the university which is of course where he discovers that your heart's desire is not always what it's cracked up to be...

Yet another book I feel rather ambivilent about. To tell the truth I actually wonder if I'm getting a bit bored with long fantasy novels. Or perhaps I'm just not finding the right ones. I did actually give this four stars on Goodreads as the writing is very good indeed and I didn't really have too much trouble finishing it. And parts of it were excellent... the section at the beginning where he was with the troupe, and the last 150 pages where I felt the book - 660 pages of it - really took off.

My problem was how formulaic it is. Life at the university was at times interesting but he gets banned from the 'most' interesting bit... the archives... so we didn't actually get to read much about that at all. Instead we get reams about his feud with a rich student, Ambrose, and I just felt like I had read that in so many other books. Harry Potter for one... Trudi Canavan's books... and I'm sure there are more. Why are none of these kids' school lives ever normal?

The other thing which made me sigh deeply was yet another male author for whom women seem to be an afterthought. You'd never think we make up fifty per cent of the population. His mother hardly figured at all and all the other women in the book were required to be beautiful and potential girlfriends, or fancied Kvothe rotten, thus suffering from unrequited love and so on and so on. I know I'm perhaps not the target audience of books like this but I do get very tired of this male sexual fantasy type of writing. How are we ever supposed to educate boys to change their attitudes towards women when grown men keep churning out these books that exclude ordinary girls and women? Where every woman has to be stunningly beautiful or she doesn't exist. Sorry to rant but it annoys me. I'm now wishing I'd given it a three instead of a four on Goodreads. LOL!

All that said it's not a bad read if you're not ultra-sensitive to this kind of thing. Most people adore the book and it has one of the highest ratings on Goodreads that I've ever seen. It had enough about it that I can't decide whether or not to read the sequel, The Wise Man's Fear. On balance I think I probably won't. It's around 1,000 pages long and I'm not sure I can stand to be irritated for the amount of time it'll take me to read it, despite occasional flashes of brilliance.

I'm hoping one of these days I'll find a fantasy series by a male author that I really love. So far Robin Hobb (female... in the UK Robin tends to be a boy's name) is and probably always will be my favourite fantasy author. Her Liveship Trader series has some fantastic women in it, 'all kinds' of women too with actual characters! Just love it.

I read both books when the second one came out new... I thought they were good.. not fantastic..and of course I read both huge books and book 3 never came out..and I would NOT read them over if book 3 ever comes out.. I just will not buy book 3... disappointing to say the least..

It doesn't sound my cup of tea - or yours as it irritated you. At least it's another book off the TBR piles!

Cath: I've got this one slated to read this year. I'll be interested to see what I think of it after seeing your review. My best friend loved it (and sent me a copy which is why it's on the TBR stack).

Pat: I think your description 'good... not fantastic' is absolutely spot on. There is now a connected novella (about Auri I think, but am not sure) but yeah, no news as far as I know about book 3. I can't say I'm fussed. lol

Margaret: Bear in mind you might feel differently about it to me. I am easily irritated by some things. LOL!

Bev: Oh wow, well I'll be very interested to hear what you think. I hope I haven't prejudiced you against it too much.

Cath, oh, I don't know - I am easily irritated by more and more these days, the way the world is going for one thing ... it seems we're going from bad to worse. The news is never good.

Margaret: The news is appalling and I see no end to it either, that's the most depressing thing. No way out of it and it makes me afraid for my daughters and grandchildren... the world they're going to inhabit in years to come.