My book six for Carl's Once Upon a Time IX challenge is Fyre by Angie Sage. It's also my book fourteen for Bev's Mount TBR 2015 challenge as I've had it on my Nook since before the end of December 2014. 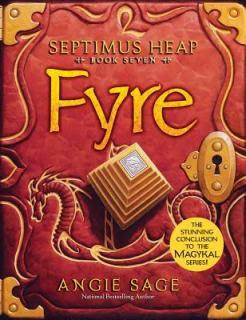 Jenna is now fourteen and waiting to be crowned Queen. Her whole family, including the forest Heaps, are at home in the castle for the event and also for Lucy and Simon Heap's wedding. Septimus Heap's apprenticeship is still ongoing and he and Marcia, the ExtraOrdinary Wizard, are working on destroying the two-faced ring, one of the last remnants of the Dark Domaine. It involves reviving the Alchemie Fire which is an extremely dangerous undertaking. Septimus is working closely with Marcellus Pye, an alchemist, but Beetle, Septimus's old friend and the new Chief Hermetic Scribe, thinks Marcellus is up to something fishy. There's a lot going on and keeping tabs on it all is trying Marcia's patience... not helped by the fact that she has the ghost of the 'old' Chief Hermetic Scribe sitting on her settee screaming at her every time she goes to her quarters. The ring is the problem though and until it's been destroyed it has to be watched day and night by wizard volunteers. Two of Septimus's uncles come to stay for the wedding and volunteer to help keep watch on the ring. Perhaps their offer is too good to be true...

My grand-daughter and I were lucky enough to go to a fantasy panel evening as part of Tiverton Literary Festival this past weekend. Angie Sage was one of the two authors present (the other was debut author, Lucy Hounsom) so we were able to see her speak about this excellent YA fantasy series. How nice to see an author whose books you enjoy so much, 'in the flesh', so to speak. She was delightful and we had a fun evening listening to the two authors answering questions and reading from their new books.

I read Fyre to finish off the Septimus Heap series before the panel and, as always, thoroughly enjoyed the instalment. This last book ties off a lot of loose ends and 'feels' like a final instalment. As such, I found it very satisfying although a bit sad that these kids, whose adventures I've followed quite closely, are now growing up. Certainly I think this is one of the best fantasy series for teenagers around. I love the sense of family, the humour, the adventures the characters have, the battles between good and evil and so on... there are even dragons! What's not to like?

What I discovered on Friday evening is that it's not the end. Angie Sage has started a new series in the same 'Septimus Heap' universe, but with different main characters. The first book is called Pathfinder and you can read about it here. She read a bit of it out and it sounded pretty good to me so I'll definitely be reading that at some stage.

I didn't buy Pathfinder that evening (and am now thinking that maybe I should have) but I did buy the new book by the other author present, Lucy Hounsom, which is called Starborn. This is it: 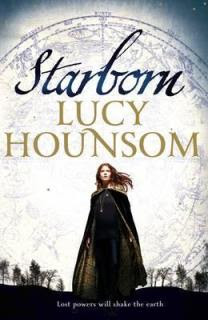 You can read about it on Goodreads here. I thought it sounded rather good, I must say, and look forward to reading it.

I more or less commented on Angie Sage in an email I just sent you ! Glad you enjoyed the series, I know the 5 of them I read I enjoyed too!

And yes! it is great to meet "the author" of any book you've enjoyed. I love my communication with Michael Scott and his YA series on Nicholas Flamel!

What a fun time for both you and your granddaughter! I have been well aware of this series since I worked at the library. And I've meant to read it. Perhaps this summer is the time to begin it.

Pat: I think it's one of the best YA I know of. Shame you don't still have yours.

It was so nice to actually see an author whose books I like so much. I don't think that's happened before.

Kay: It was wonderful to go with my grand-daughter and I was so pleased that she enjoyed it as much as me.

The series is hugely charming and I highly recommend it, even to ladies of our age. :-)