Having made a complete pig's ear of this post this morning, five minutes before I was due to go out and no time to correct it, I'm trying again this afternoon. Ever get the feeling you don't belong in this century...

I'm going through one of those busy periods at the moment - my husband had a knee operation the week before last so that's involved a lot of coming and going, next week I have a friend from Memphis coming to stay for 10 days so of course that means lots of housework and careful planning, and after that we're off on holiday to Cornwall for a week. So basically October is going to be something of a washout as far as reading is concerned; it'll probably come down to reading in bed for ten minutes last thing at night. The book I'm talking about here, The Moor by Laurie R. King, took me ten days to read and that's no reflection on the book - it was an excellent read. It is in fact the fourth and final book for my Peril the First challenge for Carl's RIP III Halloween challenge.

This the fourth book in the celebrated Mary Russell/Sherlock Holmes series. It begins with Mary, busy with her studies at Oxford, receiving a telegram from Sherlock Holmes. He's on Dartmoor, staying with a friend, The Rev. Sabine Baring-Gould. He needs Mary's help but doesn't say why and, albiet reluctantly, Mary hotfoots it down to Dartmoor immediately. She arrives in the middle of nowhere, isn't met, and has to walk the two miles, at night, in the pouring rain, through muddy lanes. She arrives wet, muddy and dishevelled and isn't best pleased at the rather snotty reaction she gets from the men of the house. Worse still the house is freezing and the food appalling: Mary is more than a little bit inclined to return to Oxford the next day. Instead she allows Holmes to tell her about a strange death that has occurred on the moor and about a ghostly coach accompanied by a large black dog that has apparently been seen in several parts of the moor. Russell and Holmes set out to travel the moor, gathering as much information as they can about the dead man and the apparitions people have seen. Baskerville Hall, the scene of one of Holmes's most famous cases, has new residents, Americans, Richard Ketteridge and his secretary, David Scheiman. Holmes and Russell get to know them and then suddenly the mystery deepens when a man is found dead - floating upside down in a quarry pool. Can The Moor be persuaded to reveal some of its secrets to the two sleuths?

I think this is probably my favoutite Holmes/Russell mystery so far. I live not far from Dartmoor and visit occasionally, so some of the locations were quite familiar to me. That could explain why I like this one so much but I think too the air of mystery and suspense is quite strong. But really, I think it is all down to Dartmoor itself. The author describes the wildness of Dartmoor very vividly, it's as though the moor is an important character in its own right, so strong is the atmosphere of wild but slightly menacing beauty. I've fished out a few photos I've taken in the past which I thought would go quite nicely with this post. 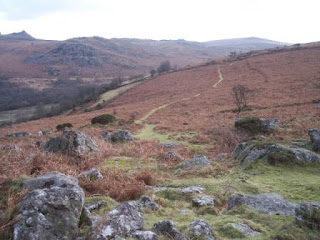 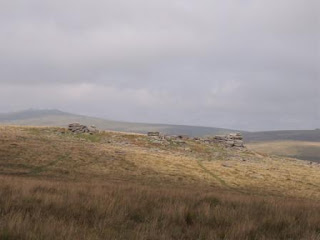 Next, two views of Hound Tor: 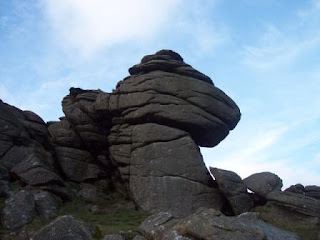 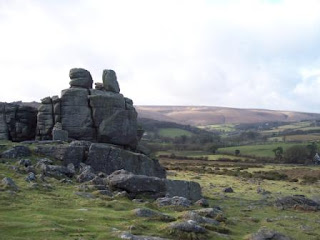 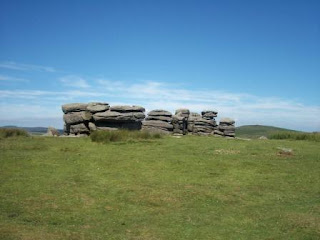 The softer face of Dartmoor - this is the village of Buckland-in-the-moor. 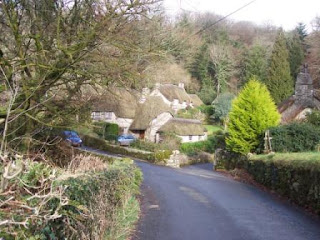 And this is Widecombe-in-the-moor of Uncle Tom Cobbley fame. 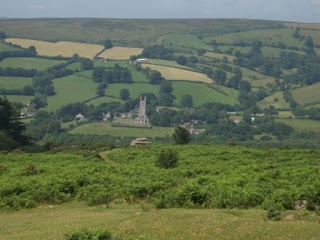 Anyway, an excellent read. Officially my challenge is finished I suppose but I intend to continue with the books on my list as there are several I still really want to read - depending on time of course.
Posted by Cath at 10:50

I just knew you'd like this book even thought I didn't know you lived that close to where spooky things happen lol..

I am so glad you enjoyed it, Cath. I think it is my favorite as well - the atmosphere, and the connections between Holmes' past case, and the real character of Baring-Gould. All too wonderful. Of course, I've loved that notion from the first that the author 'found' a chest with all this stuff in it. What a marvelous conceit (is that the right word?).

Awesome photos Cath! I've been wanting to read this one ever since Deslily reviewed the series...definitely have to get it!

Wow! I love the photos! I've been thinking I should try this series sometime...one of these days!

Holy Moses! What glorious pics!!! Congrats on finishing your peril!!! I do hope you get some reading in during your very busy month and I pray that all goes well for you and your family this busy October.

This is one of my favourite Mary Russell books, so I'm glad you enjoyed it. Thank for the photos, they show what inspired Conan Doyle and then Laurie R King.

Hi Pat. Glad you like the photos. Dartmoor is so beautiful though that it's easy to take nice photos of it. When you eventually come and visit me I will give you a spooky guided tour. heehee.

Nan, I meant to mention Baring-Gould in my post and forgot. It's interesting that Laurie King used a real person in her book. I even found one of his ghost stories in an anthology I have.

Glad you liked the pics, Chris. This series is so worth reading, not just for the crime element but they're also full of historical facts and very well written.

I hope you do try this series, Tara. They're thoroughly entertaining but at the same time intelligent. Mary Russell is an unashamed blue-stocking and I like that a lot.

Carl, thanks for your congrats on finishing the challenge. I knew I had to be done early because of what October is going to be like. I'm still hoping to read a couple more books off my RIP list though, in fact have already finished another one. Glad you liked the pics and thank you too for your good wishes.

Hi Sarah, I'm so pleased you liked the photos. The area is so beautiful that I'm not surprised both Conan Doyle and Laurie King were inspired to write about it. I'm really looking forward to reading the rest of the Mary Russell books now.

The book sounds deliciously atmospheric. I definitely need to read this series!

Hi Nymeth, I'm really pleased you like the photos. I honestly think this is one of the best series around at the moment and well worth dipping into.

I wondered where you were - sorry about your husband's knee and hope it is mending well.

You mention this is the fourth book in the series Mary Russell/Sherlock Holmes series. I seem to have missed all these, so I must check them out as they sound really excellent.

Lovely photos too. I hope you have a good time with your friend and in Cornwall and I hope to see more photos!

I loved seeing these photos! What a fun post! I hope your husband is doing well with his recovering from knee surgery (which is not fun!).

Booksplease: Thanks, my husband's knee is healing but slowly. He did too much a few days after the operation and set his recovery back quite a bit.

The Holmes/Mary Russell series is excellent, imo. The first book is The Beekeeper's Apprentice.

Oh yes, I'll certainly be taking more photos when we go to Cornwall.

Robin: Glad you enjoyed the photos. No, knee surgery is not fun and his recovery is slow but he is getting there now, thank goodness.