It's about as wet and miserable as it could possibly be today, 'soup' weather, so I spent the morning making Tara's lentil soup. We had some for lunch and it was absolutely delicious. There's plenty left for another day and it's a definite 'make again' recipe.

It's 'indoor' weather as well as 'soup' weather so I got going with our Cornish holiday photos from several weeks ago and am posting a few here. This first lot are of Sennen Cove which is on the same stretch of coast as Land's End, facing the Atlantic Ocean - next stop Newfoundland if you're mad enough to jump in. This wasn't a day for jumping in though... we'd had a real Autumn gale the day before and, knowing the area as I do (born and brought up here), I realised that Sennen was the place to go to see some good, rough seas. 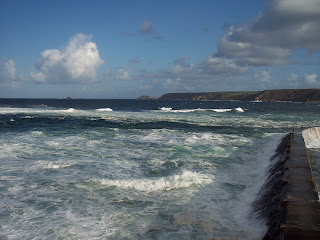 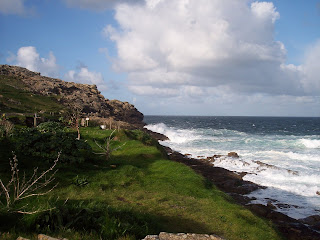 Two views from the car park. That's Cape Cornwall in the distance in the first one, the only cape in England. Closer photos of that next time. 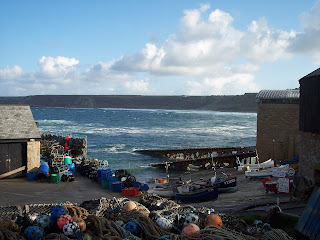 The little harbour at Sennen. 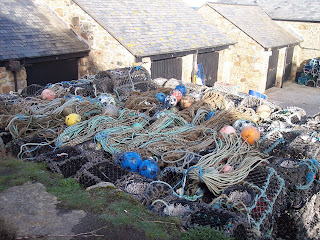 I love all the nets and floats piled up for the winter. 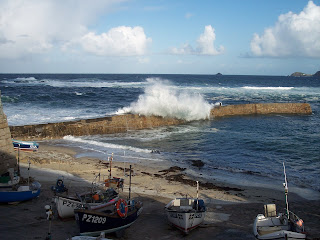 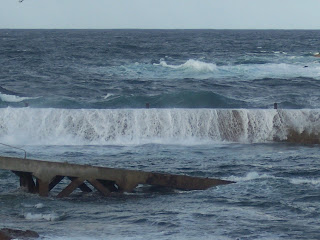 The sea was crashing over this break-water in huge waves and cascading down like a water-fall. 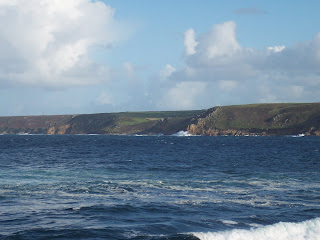 More of the coastline. 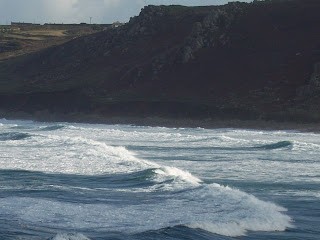 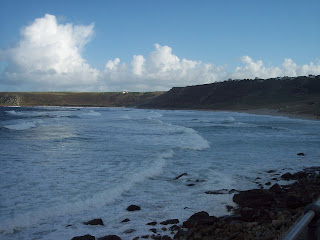 Two of the bay itself... very popular surfing area in the summer. 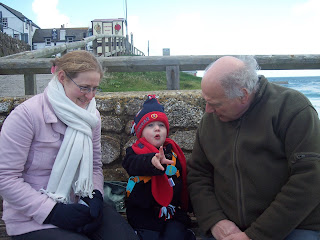 It was quite a cold day - our youngest daughter, our grandson (aged just two) and my husband, all wrapped up against the biting wind. I want a Thomas the Tank Engine hat like my grandson's!

Reading-wise I've just finished a YA fantasy, Mortal Engines by Philip Reeve, and liked it so much I'm off to the library to try and get part two this afternoon. More on that book later in the week. Now reading Dead Cold, the second in the CI Armand Gamache books by Louise Penny.
Posted by Cath at 11:42

I have always thought that Cornwall is a much more dramatic county than Devon, Cath, and your photos prove the point. You must miss those wild seas and strong land/seascapes. Lovely pictures.

wow.. great sea shots Cath!! Rather ruff looking..don't think I'd want to swim there lol.. not that i can swim even in a pool mind you! heh.

Lovely pictures, Cath! Thanks so much for sharing. You know, I finished Susan Cooper's Over Sea, Under Stone, which is set in Cornwall, today. It's nice to have some actual pictures to add to my mental images!

Hi M! I think the amount of rugged coastline makes Cornwall a bit more dramatic, although the N. Devon coast is pretty wild around Hartland. Devon also has a lot more trees so in that way it is a 'softer' county. Yes, I do miss Cornwall but luckily we're not too far away for visiting.

No, not the best place to choose for a swim, Pat. (I can't swim either.) Not even in nice weather, unless you're a quite a strong swimmer or a surfer.

Thomas the Tank Engine is a set of children's books from quite a few years ago. A vicar wrote them. The books were made into a TV series, with, if memory serves... Ringo Starr! Young Scott loves the books and has toys and that nice hat and scarf that his grandma covets. :-)

Thanks, Nymeth, glad you like the photos. I'll post more soon. I really must get around to the Susan Cooper books. I forgot they were set in Cornwall. Off to see if you've reviewed them yet...

I'm so glad you liked the soup! It freezes really well.

What gorgeous pictures these are - so vibrant and dramatic.

Hi Tara. I was hoping the soup freezes as we still have some left, even after several meals. My husband said it was one of the best soups I've ever made and that I should tell you 'thank you for the recipe'. Message duly passed along. :-)

Tell your husband he is welcome! Now if only I could get my husband to eat it...