I've recently been watching the BBC travel doc. series, South Pacific, which has been absolutely stunning. 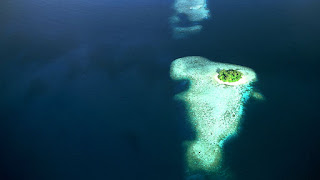 And that put me in the mood for something non-fiction and travel orientated about the area. No problem - I'd already put Solomon Time by Will Randall on my list for the Non-fiction five challenge which is being hosted by Trish's Reading Nook. Having already read two of Will Randall's travel books I had an idea of what to expect and wasn't disappointed.

As usual with the author he ends up going to the Solomon Islands almost by mistake. He tends to promise things, changes his mind, but is then unable to extricate himself from the situation. Having met 'Commander Something Somebody-Whatnot' on a school football field, who then dies not long after, Randall finds himself promising to go to the islands to set up some kind of business with money left to the islanders in the Commander's will. The deal is that the business should benefit the islanders long term and not be a quick fix.

So off he goes and, reaching the main island airport and awaiting the small plane to take him on to his destination, discovers the true meaning of the term 'Solomon Time'. It's sometime never... whenever is convenient... 'chill out'. The plane is five hours late leaving and none of the other passengers seems remotely bothered by this.

Randall eventually arrives at his new home on New Georgia and for the next few months meets a whole host of characters both local and not-so local, well meaning and friendly... and one or two who are not so much so. And then there's the wildlife:

"Nearing the top of the incline, however, I experienced the curious sensation of someone lightly laying a hand on the top of my hat. I stopped and slowly peered up. I could see nothing but the underside of the rim. Loath though I was to, for all the trouble I was going to have getting it back on, I carefully removed the hat and, keeping it upright, lowered it to inspect. On it sat a spider so colossal that had it been sighted in Eurpoe would have been reason enough for the evacuation of a medium-sized town. 'G'day. Nice hat!' it leered sarcastically."

All kinds of adventures and mishaps ensue, including being shipwrecked on an uninhabited island, but eventually an idea occurs to the author concerning the kind of business the islanders might be able to set up and run for themselves.

Randall took with him three books, In the South Seas by Robert Louis Stevenson, A Pattern of Islands by Arthur Grimble and Robinson Crusoe by Daniel Defoe. These are used to great effect throughout the narrative when he gets himself into various scrapes and considers what each of these authors would do in similar circumstances. These speculations form a lot of the humour in the book but certainly not all. The author is self-deprecating in the extreme, sometimes a little too much I feel. He almost wants us to think he's shallow, imo, but no one who can write like this:

"High up and bored, a sea eagle planed in circles, like a boy on a bicycle in the park waiting for his friends. Yawning, it finally headed off over the false forest floor of tree tops, its tawny wings beating in slow motion. Fat, wet splats of rain began to fall, and as they became steadier, I sheltered under the broad protection of a banana tree. On the other side of the valley, through the arch of a feeble rainbow, came two girls running through Old Edith's garden, each guiltily clutching a paw-paw to their chests with one hand. With the other they held, above their heads, huge palm leaves that hung down to cover their entire bodies. At this distance, they looked like a couple of crafty, green beatles scurrying along, picking their way through the undergrowth."

can be anywhere approaching shallow... not in my book anyway!

This is actually Will Randall's first travel book. Typical of me, I read his third book, Botswana Time first, followed by Indian Summer second, and now this one at last. I've thoroughly enjoyed each and every one. He has a beautifully descriptive but also nicely humorous way with words that means his books are easy to read but with a surprising depth to them. Somehow, he's able to catch the very real atmosphere and essence of the places he visits and conveys that to the reader. If you've never read a travel book then his books would be a very good place to start - I can't imagine anyone being disappointed with these charming, informative, atmospheric books.

I had a look on Amazon to see what else was available about the South Pacific, added them to the books Randall took with him, and came up with this short list:

The Happy Isles of Oceania - Paul Theroux (I own this)
Tales of the South Pacific - James A. Michener (war memoirs that became the basis for the musical South Pacific)
Voyaging the Pacific: In search of the south - Miles Hordern
Sea of Glory - Nathaniel Philbrick (history)
Romancing the Islands: Journies in the South Pacific - Kim Gravelle
Robinson Crusoe - Daniel Defoe (read this)
A Pattern of Islands - Arthur Grimble (read this years ago)
South Sea Tales - Robert Louis Stevenson
Treasure Islands: Sailing the South Seas in the wake of Fanny and Robert Louis Stevenson - Pamela Stephenson

There must be a lot more so if anyone knows of any, please do leave a comment. 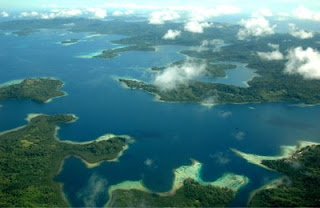 I have one on my bedside table called Fatu-Hiva Back to Nature by Thor Heyerdahl. I know it's about life on tropical island of some sort, but not sure if they're south sea or somwheres else.

Hi Jeane. I'll investigate Thor Heyerdahl. I haven't heard of the one you mention but I think we were talking about him on your blog a few weeks ago and didn't we mention an Easter Island book by him? Of course, I may be thinking of another author...

This sounds like an interesting author. I have been to a couple of South Pacific islands but I would definitely like to see more. My husband would like to go to the Solomons because of the WWII history that is there.

Marg: I've read 3 of Will Randall's books, this one, one set in India and I can't remember now where the other was set, but they've all been very good.