It's getting colder here in England. Almost cold enough to put the heating on and certainly cold enough for spooky, autumnal reads. Thus, I've just finished my fourth book for Carl's R.I.P. V challenge and that book was a YA horror story, Blood Sinister by Celia Rees. 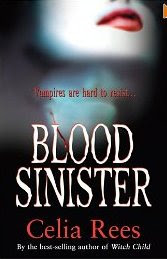 It (the graveyard) was a wild place, strange and dangerous. Public notices barred access for good reason. There were no real pathways left, it was easy to get lost, and the ground was honeycombed with crumbling vaults and passages. In some places huge holes yawned under a thin disguise of grass and brambles. In others one step was enough to break through rotten brick to a pit deep enough to hide a house. Besides, even on the brightest day, it was a place of shadows. Crowded on all sides by streets and houses, it remained an island of eerie silence.

Sixteen year old Ellen is ill. Very ill. Fading away in fact and her family and the medical profession have no idea of the cause. She is sent to stay with her grandmother in London to be closer to the best medical help and an old childhood friend, Andy, is brought in to try and cheer her up.

Then Ellen discovers her great-grandmother's diaries from when she was Ellen's age, in the attic, and begins to read. Her great-grandmother, also called Ellen, lived with her father who was a famous blood doctor. A man had come to stay, Count Franz Szekelys, his family known to her father while in Europe, but a stranger to Ellen. She doesn't like him, or his female companion, but her father seems strangely in thrall to these people.

Meanwhile, Andy, is proving a welcome diversion for the modern Ellen and they share the exicitement about the diaries. But her condition is not improving - if anything it's worsening and things come to a head when Ellen is admitted to hospital...

I wondered, while reading this book, what it would have been like if it had been written for adults. I decided it would have a lot more meat on its bones and imagined something like The Historian by Elizabeth Kostova. As it is, it's a Young Adult book and none the worse for that and I'm sure teens will enjoy it, but for me it lacked a bit of depth.

I liked the idea of Ellen discovering the diaries and that part was the most interesting for me - probably because I find Victorian Britain more interesting to read about in vampire yarns than modern. As can be seen from the quote above, there was a wonderful disused graveyard opposite Ellen's grandmothers's house but hardly any use was made of it in the book, even though it was quite important to the plot. (Two wonderful 'graveyard' books to my mind are Falling Angels by Tracey Chevalier and The Graveyard Book by Neil Gaiman.)

This is not a vampire yarn the like of which fill our bookshops at the moment. I quite like some of those but this made a nice change and was, in places, genuinely scary. Character-wise, I didn't really connect with Ellen or Andy, although the villain of the peace was pretty disturbing. That said, there was enough about the book to keep me reading to the end.

Not bad, a quick easy read... maybe get it from the library or nab my copy if you're really interested as it's going spare and will go back to the charity shop otherwise.
Posted by Cath at 09:58

taadaaa! sorry this wasn't the greatest book but glad that you finished the 4 books!!

I am reading The Little Stranger now .. it's pretty good, but my mind is on the other book by Cox that should be coming in the mail any day now lol.. it sounds awful to say but even if the Meaning of Night wasn't good it was worth reading it just to feel the quality of those satin pages always under my fingers lol.. sad but true!! I hope book 2 was made as well!!! (but it was a good read so it was a win-win book)

I need something for adults I think. Enough about teenagers! LOL. Oh wow, will be interested to hear about The Little Stranger as I have that on my tbr pile. I have a crime story to read and then I might try something Victorian and creepy as we approach Halloween itself.

Good for you not putting your heating on yet - I'm afraid that ours went on at the end of September when we had a run of damp, grey days when the cold seemed to get into your bones!

I think Junior Daughter, now almost 17, read this when she was a lot younger and enjoyed it then and I think it is still on her bookshelves so I might have a look for it.
I have been reading the stories from The Virago Book of Ghost Stories in a lead up to the witching season - bit of a mixed bag and not many that made me want to avoid darkened rooms.

Good review, Cath, and I will look for this at our library now. It's interesting that you thought it might be better or more filling as an adult book (more fleshed-out). Congrats on reading four books for the challenge! It's fun, isn't it?

LizF: The heating is now *on* you'll be pleased to hear. LOL.

I've read the Virago book and like you found it a mixed bag. Book 2 is the same. For really good one it's hard to beat Victorian Ghost Stories edited by Michael Cox and R. Gilbert in my opinion. I'm also rather fond of The Ghost Now Standing on Platform One. Lovely railway ghost stories.

Susan: I think it's just me hankering after something a bit more adult. There's only so much teenage angst one can take. LOL.

I'm hoping to read one or two more books for RIP but we'll see. I'm on a bit of a crime kick at the moment. Just finished A Beautiful Blue Death by Charles Finch which was rather average, and am now reading The Arsenic Labyrinth by Martin Edwards, which is not. :-)

I have read a couple Celia Rees but it has been a while since I have. I should add another one in somewhere.

It's rather chilly here, too! Some parts of Canada have had snow all ready. I am not ready for snow...

Kelly: I've read one other by Rees too and think she's not a bad author for teens really.

No snow here yet, apart from Scotland. But it's been pretty cold and people are predicting another snowy winter. We'll see.