Crime writer, Ann Cleeves, is a newish discovery for me. I read about her Shetland series on several blogs before trying the first book, Raven Black, in May. I liked it a lot and, on a recent trip to the seaside town of Teignmouth, grabbed a copy of book two, White Nights, from their library. 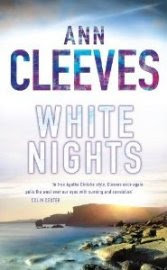 The 'white nights' the title of this book refers to revolves around the fact that the Shetland Isles, where this series is set, is very close to the Arctic Circle and thus experiences hardly any hours of darkness during the summer. Instead there's a kind of permanent dusk all night, referred to as 'white nights'. Residents of the isles feel that this unnatural light almost causes a kind of madness amongst the population.

Jimmy Perez is at an art exhibition, publicising the work of his new girlfried, Fran, (who featured in the last book) and local artist, Bella, when a complete stranger has a breakdown. He professes to have amnesia but Jimmy is suspicious for some reason he can't put his finger on. The man disappears when Jimmy's back is turned and Jimmy returns to the exhibition. Next morning a body is found in a fishing hut and it is the unknown Englishman who caused the scene the night before.

Who is this man? And what did he know about about the inhabitants of the small coastal hamlet of Bidista? Specifically, four people in their fifties who have grown up together, Bella, the famous artist, Aggie, Kenny and his wife, Edith. It doesn't take Jimmy long to realise that there are secrets, not only amongst these four but also amongst their children and Bella's nephew, Roddy. It's a can of worms and Perez is not helped by the fact that, once again, he has to wait for a more senior officer to come from the mainland to help solve the case *and* by the fact that when Taylor arrives he has a hard time coping with the 'white nights'.

I think I enjoyed this more than Raven Black and Raven Black was not at all a bad book. I would call this a pageturner. Ann Cleeves's writing is very readable and pacey with a lot going on plotwise and the reader can't help but keep on turning the pages. Perhaps a lot of crime yarns are like this... I don't know as I'm fairly new to the genre... I just know that some of the crime authors I've come to love seem to write these kind of compulsive reads!

One of the things that appealed to me particualarly was the use of secrets in the plot. I do love a story where all is not as it seems and the characters have deep dark secrets that the reader has to try and guess at. I have to admit that I guessed who'd done the deed very early on. It didn't spoil my enjoyment because, of course, I had no idea if I was right, but I also wanted to know the background and reasons for the crime. Sometimes that can be more interesting than who the culprit actually is and the whole thing was skilfully handled, in my opinion.

My only other comment is how much I love the setting of the Shetland Isles. I've never been lucky enough to go but, judging from the beauty of Ann Cleeves's descriptions, it's a bleak but hauntingly beautiful place and I would love to visit one day. Maybe not in the summer though...
Posted by Cath at 15:40

excellent review! Glad you enjoyed the book! it's so funny I keep reading about England of old and you (are much better than me) spread yourself all over the world ! lol the closest I got to doing that was the mary russell series!

Cath, I'm really glad to hear that this series has worked well for you. I haven't read any of the books yet, but I think that our tastes are similar. It's on my list soon. Glad to know that it's a winner. That 'White Nights' thing is interesting. I do know that I would have trouble with it. I much prefer sleeping in total darkness and even had trouble when we lived much further north with early sun risings and late settings. :-)

I've only skimmed because this is in my library pile, but this seem like a good place to thank you for pointing me towards Raven Black - which I reaaly enjoyed.

Pat: I'm an armchair traveller and no mistake. Too old and decrepit to go to some of these places now (although Shetland is still a possiblilty) so I sit in my chair and read about them. And sleep in my own bed... heheh.

Kay: Our tastes being so similar I'm as certain as I can be that you would like this series. Such a lovely 'wild' atmosphere to them. I also just got the first of Ann Cleeves's birdwatching crime series, A Bird in the Hand. Being a bit of a birdwatcher myself I had to have that, even though it cost me a bit on AM.

You and me both about sleeping in total darkness. It can be a problem here in England with early sunrises in the summer. 4am for weeks on end. Luckily, that's now behind us for a few months.

FleurFisher: My pleasure. I wish I could remember where I first saw them blogged about.

Cath: oh lord, me too! Know how many times I've heard the waves crashing on Merlins Cave? or been to a Maggie Smith play in London? lol..but in my head I've been there!...I have visited Cornwall a number of times in books..and "old" London a million times! (didn't care for the Opium dens thank you very much, I'll pass on that LOL)

Pat: Funny how you start out young and think the world is your oyster and you're going to do all the things you want to do. And then suddenly you're heading for 60 and you have to come to terms with the fact that some things are never going to happen. It's a tough reality check. Weirdly... I *have* actually heard the waves crashing in Merlin's cave. LOL. Old London is a fascination for me too, the seedier the better! Just doing that 'I am' thing you did, will post it later.

I have just got the (so far) last Jimmy Perez book to go but I am saving it up until I am in need of a really good read!
I will definitely be looking out for Ann Cleeves' other series as she seems to get the balance right - sufficiently real but not too graphic!

LizF: I'm waiting for my library to get Red Bones back in. I hope there'll be more of this series after the 4th.

I just treated myself to the first of her birdwatching series, A Bird in the Hand which looks like fun.

Another armchair traveller, here - & always on the lookout for a good crimewriter. Have already read so many approving comments things about Ann Cleeves, & appreciated your thoughtful review (comprehensive, but without 'spoilers' = not an easy thing to do!). Thank you.
PS Share your views on Cardiff & Tenby. As for the 'meme': snap - er, except for numbers 5,6 and 16-18 ;-)!

Minnie: Thanks for visiting my blog. I try hard to do reviews without spoilers, nothing worse than someone telling you the outcome of a story before you've read it! Ann Cleeves is well worth trying, my other two favourite crime authors so far are Martin Edwards and Elly Griffiths. All worth trying in my opinion.