The Meaning of Night

Author, Michael Cox, died last year at the age of 61. I knew him from my copies of Victorian Ghost Stories and The Oxford Book of English Ghost Stories both of which he edited with R.A. Gilbert and are two of the best ghost story anthologies available in my opinion. Until he died I had no idea that he'd written a full length novel. Apparently it took him 30 years to write - which doesn't really surprise me - and was eventually published in 2006. My good friend Deslily read it for her R.I.P. V challenge and enjoyed it so much that I was spurred on to nab it from the library and give it a go. 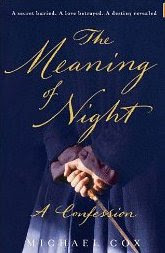 The first sentence of this book informs you that the narrator, Edward Glyver, is a murderer. And the whole point of this story is to explain why. Edward has been brought up in Dorset, in the mid 1800s, by two people he believes to be his parents. His father is a wastrel, his mother writes romantic fiction to keep the family fed. She is overworked and mentally exhausted. Occasionally the family is visited by a woman Edward knows as Miss Lamb and all he knows about her is that she is his mother's best friend. Eventually he is sent to Eton to complete his education and here he meets one, Phoebus Daunt, who will have an unimaginable impact on his life.

Phoebus lives at Evenwood, a large stately home, where his mother, a cousin to the owner, Lord Tansor, has been busy ingratiating herself with him with a view to persuading him to make Phoebus his heir. When Phoebus conspires to get Edward expelled from Eton, it sets Edward on a lifelong course of revenge... and discovery. What is his own connection to Lord Tansor's dead first wife? Why does Evenwood seem familiar? And who actually was the woman who visited him as a child? Edward tells Phoebus as he leaves Eton that 'Revenge has a long memory' but does not envisage exactly how long and what he will have to go through to exact his revenge.

Wow. Just 'wow'. How can you sympathize with a murderer? Because a murderer is just what Edward Glyver is. He tells you what he did to an innocent man within the first few pages and you're horrified, but something tells you he has his reasons. And while you remain horrified, as you read on you can see the logic and can understand his motives. He is not the nicest of people himself. He's a manipulator, a bit of a womaniser, and indulges freely in the seedy underbelly of Victorian London. But still you realise that he has been unfairly treated by persons known and unknown and can't help but have some sympathy for his predicament. That's the work of a very good author, imo, when you can be made to feel sorry for a narrator who is not himself that pleasant a person.

I can well understand how this book took thirty years to write. It's a work of such cleverness and long research, and clearly a labour of love. The plot is intricate and twisted and the story so beautifully written; never a word out of place, it feels as though it's been written by someone of the Victorian age, when of course, it hasn't. Michael Cox was of my own generation! This is how to write a Victorian novel... I feel like flinging it at a few authors I could name who've made such a travesty of their attempts, but I won't go there. If you like a Victorian novel with a gothicky feel to it, secrets, a mystery that needs to be solved and excellent historical detail then look no further. And there is a sequel. The Glass of Time, published in 2008, before the author's death, picks up the story 20 years later. I can't wait to read it.
Posted by Cath at 09:35

oh yeah! it's a good one for sure! lol.. I'm glad you liked it so much, and just so you want to read the second book... i think I liked it even better than the first!!!

Such an interesting review of a genre I don't often visit these days. You have piqued my curiosity and I do believe there is another book to add to my list. Thank you for such a good review.

Michael Cox was a genius, it's as simple as that! Do read that sequel - it's a gem.

This sounds like a 'must read' for me, I'm just to curious to know more.

You had me hooked, when you spoke of the first sentence from the book and the rest of your great review just confirmed that I really need to add this to my wish list.

I have had this book for a few years and have yet to read it! I hope it won't take me as long to read it as it took Cox to write it - I doubt I'll still be reading by then!

Seriously, I can't think why I haven't read it yet. I'm making a mental note to read it soon.

Pat: I thought it was superb. Took me 9 days to read but it was so worth it. I checked the library for The Glass of Time yesterday but it's out at the moment. When it comes in I'll grab it.

lifeonthecutoff: it's a book that really crosses genres, imo. It's an historical, a mystery, a bit gothic and a book lover's book as well. Something for everyone.

fleurfisher: I completely agree and he may have ruined me for many other authors of Victorian novels. Don't worry, as soon as the sequel appears in the library I will be nabbing it.

fiction-books: I've yet to meet anyone who has read the book who didn't like it. It even has 5 stars on Amazon (if memory serves). His death is such a sad loss to the world of books.

Margaret: it would make a really excellent Christmas read. It's quite Dickensian in parts.