Throne of Jade and R.I.P. wrap-up

It's high time I wrote something here but it's been a hectic couple of weeks with grandchildren visiting and various bugs afflicting us all, so something had to go and reading and bookblogging was it. I'm hoping now for a nice quiet November, at the end of which we're away for several days holiday in South Wales again. Can't wait.

Anyway, because it's been so busy I've not read much and it took me two weeks to read Throne of Jade by Naomi Novik when it should have taken three or four days. No matter, if I prod myself often enough I might even come to realise that this reading thing I love so much is not a race. 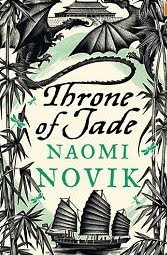 Throne of Jade is book two in Naomi Novik's Temeraire fantasy series. In book one we saw how William Laurence, a captain in the navy at the time of the Napoleonic wars, became the companion of a Celestial dragon, Temeraire. By the end of that book the two are a fighting unit and this is the situation at the beginning of book two. But all is not well. Temeraire was seized as an egg from the French, the Chinese having given the egg to Emperor Napoleon. The Chinese want their dragon back and have sent a delegation. Against his better judgement Laurence and Temeraire embark on the sea voyage back to China to sort out the mess and try to ensure that the two can stay together. The voyage is hardly uneventful though and Laurence has his work cut out, not only communicating with the Chinese but in deciding which of them he can trust. And this is without the age-old friction between the dragon corps and the navy. And hanging over all is the reality that once dragon and companion get to China they could be separated forever.

This is such a good series. You might be forgiven for thinking that dragons and the Napoleonic war are scarcely a good mix but you would be mistaken. It works wonderfully - a sort of mix between Anne McCaffrey's wonderful Pern books and Hornblower. I like Laurence as a character but for me the star of the show is definitely the dragon himself, Temeraire. I love his mix of child-like wonderment at the world and high intelligence and the author seems to be working on creating a well rounded and attractive personality in him. But really it's the togetherness of dragon and companion that is the crux of these books, their utter faithfulness to each other; I really like that I have to admit.

The other thing I like is the armchair travel aspect. I thoroughly enjoyed the sea voyage part as I like books about sea voyages. The Chinese part was excellent too and felt realistic to me, but then I'm no expert. The travelling continues I believe as I know book 4, Empire of Ivory, is set in Africa.

Hopefully this is to be a long running series. According to the FantasticFiction page for Naomi Novik there should be six books out by now but I'm not sure this is the case. But anyway, I have the first four which is enough to keep me going for a little while. This is a good series if you love dragons or something a little different in your fantasy reading.

The last two months have flown by and with it Carl's
R.I.P. V challenge. 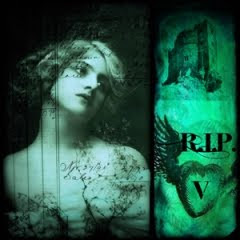 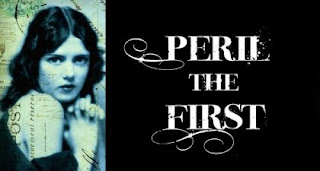 Read four books, any length, that you feel fits my very broad definition of scary. It could be Stephen King or Sir Arthur Conan Doyle, Ian Fleming or Edgar Allan Poe…or anyone in between.

I read four books... was hoping to read more but it didn't happen and I have actually completed the challenge which, for me, this year, is a plus as my reading has been slower than normal. The books I read were:

I enjoyed them all. Couldn't pick a favourite really but if one was slightly (ever so) less enjoyable it would be Blood Sinister. If I have any regrets it's that I didn't manage to read anything really meaty for the challenge... the likes of The Historian by Elizabeth Kostova or The Thirteenth Tale by Diane Setterfield. Oh well, there's always next year and I do have a likely candidate on my current library pile - The Meaning of Night by Michael Cox. Too late for the challenge but no matter.

Anyway, thanks as always to Carl for hosting the R.I.P. challenge again this year.
Posted by Cath at 10:03

The sixth book is out. I have it sitting on my TBR shelf at the moment, and it is set in Australia, so yes the travelling continues.

I just yesterday put the first book in this series on hold for myself. It's been on my list for so long. I'm really looking forward to it!

things like sickness will always dampen reading and blogging so not to worry..and like you I have gone on to read more "gothic" books.. and I really really hope you like Michael Cox's book!!!

Sometimes life just gets in the way of blogging and reading, doesn't it!

I hope November turns out to be as quiet as you want it to be. I have to keep reminding myself that reading is to be taken slowly too.

Marg: I'm so pleased the travelling continues, it's one of the good things about this series, imo.

kiistin: I read the first book in May and really enjoyed it. Mainly because it has so much variety of plot.

Pat: I am loving Michael Cox's book. It's so beautifully written and the plot got me right from the first sentence. I wish I'd read it for RIP V now.

Margaret: so far, I'm pleased to report that November is every bit as quiet as I wanted it to be.

I haven't read any Georgette Heyer for years, brings back memories of my teenage years, when she was one of my favourite authors.

Seeing your post has brought her back to mind and made me want to seek out some of her books.

Oh, I'm glad to hear you continue to enjoy the Temeraire series. I read the first one ages ago, and I have no idea why I haven't continued. Book overload, I guess. I must get to it soon!

Hi Yvonne! Oddly enough I didn't discover Georgette Heyer's books until I was in my 20s and had children. Before that I'd seen them in the library and because I was a teenage sci fi fan, had no interest in reading them. Once I tried them, of course, there was no stopping me (along woth Victoria Holt) and I devoured all I could find. And I still pick up one of her Regencies from time to time; my favourites are like old friends to be honest - Sylvester, Frederica, The Black Sheep etc. Wonderful.

Darla: I know only too well what you mean by book overload. It's not easy to read everything you want to read, especially as I'm rather a slow reader and can only manage about 60 to 70 books a year (less this year I suspect). Plus, I'm trying not to be so paranoid about *numbers*. LOL.