I had a birthday recently so first up here're the four I had for that event: 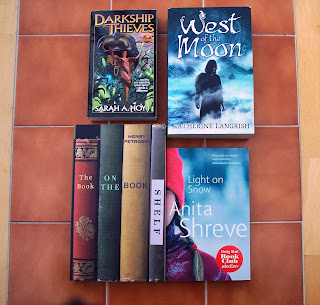 The top two were from my daughter - Darkship Thieves by Sarah A. Hoyt, which is a sci fi romance yarn, and West of the Moon by Katherine Langrish which I believe is her Troll saga trilogy in one book. The bottom two were from a dear friend - Light on Snow by Anita Shreve and The Book on the Bookshelf which is a book on the history of bookshelves and is beautifully illustrated and looks wonderful.

And from my husband: 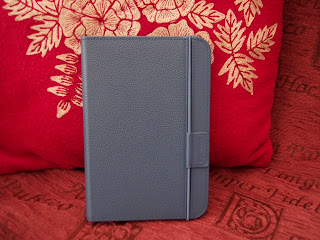 A lovely slate blue/grey cover for my new Kindle.

And these I bought for myself in a weak moment. (Well, several weak moments actually.) 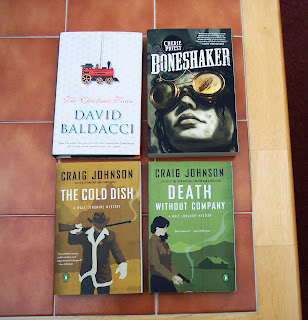 The bottom two books are as a result of reading this post by Kay at My Random Acts of Reading. I'm sure I don't need another series to start but the idea of a crime series set in Wyoming and the fact that they might be a bit cowboyish meant I had no hope of resisting the impulse to buy the first two. The Christmas Train by David Baldaci was grabbed from a charity shop. I like to read Christmassy books around Christmas and I gather he's a good author - my husband reads him - so that one jumped off the shelf and into my hands... funny how books do that. And Boneshaker by Cherie Priest did a similar thing in Waterstones in Exeter on Thursday, mainly because their library should have had it and didn't, so I got myself a little belated birthday present.

Added to this another dear friend gave me a Kindle token for my birthday and with that I got today, Neither Here Nor There by Bill Bryson, The Kingdom Beyond the Waves by Stephen Hunt and A Perfect Proposal by Katie Fforde.

Lots of good looking books there. I hope you enjoy!

I can't get into steam punk but there's a lot good said about Boneshaker. Well now.. it seems your tbr pile is growing in leaps and bounds!!! *grin* love it when others tbr pile grows!

Oh, Cath, I clap my hands in delight!! Another person that will try Craig Johnson's books. I tell you that you will love them. I know you will. Love the Kindle cover. Enjoy your treasures!

Kailana: Thanks. I'm sure I will.

Pat: I think Boneshaker should be a good read. Yeah, it seems as fast as I send books to the charity shops more come in. Lost cause.

Kay: I have a really good feeling about the Craig Johnson books and am planning to get to the first one really soon. I love the covers too. Nice to have you back and look forward to reading about your travels.

Hi Kathy,
A great haul of books you have manged to amass there, should keep you going for a while.

I have read quite a few David Baldacci books and have your Christmas book in my TBR pile somewhere, I know. I think that you will enjoy his writing, oh no! another new author to add to the list!!!

We bought my 80 year old mother-in-law a Kindle for her recent birthday and she seems to be having great fun with it. She is using our Amazon acoount, to make life easier for her and the charges keep coming through with amazing regularity, although she does get a little 'button happy' occasionally and orders things by mistake!!

Well you have had a very fruitful birthday indeed :D Enjoy!!

Yvonne: LOL! I know... I hardly need *another* new author to read but I must find out why my husband is so keen.

I don't know why but I'm thrilled with the idea of your 80 year old M-i-l owning and enjoying her Kindle. That's what the Americians would call 'cool', in my opinion. ;-)

Kelly: Yep, I did very well book-wise for my birthday. Now I have to hold off buying books for a while. Stop that cackling, Pat!!!!